NEW SERIES: How to live by the Names of Allah! 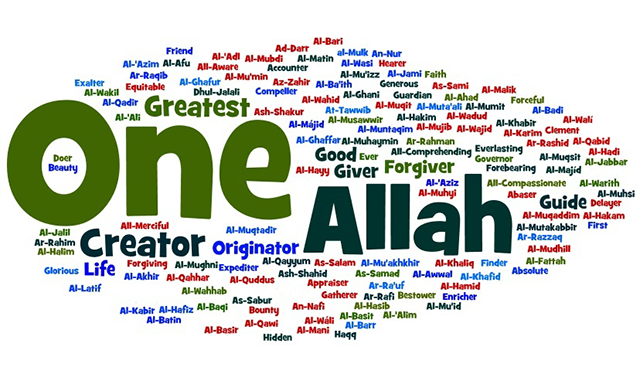 Abu Hurayra reported: The Messenger of Allah, peace be upon him, said,

“Allah has ninety-nine names; whoever memorizes them will enter Paradise.” Sahih Muslim

Does that mean just memorize the list of Names and you will enter Jannah? Ihsa’ which is mentioned in the hadith means not only to memorize, but also:
contemplate, understand and act according to them!

Do you LIVE by the Names of Allah?

Inherent in the reward for memorizing the Names of Allah [swt] is living by them.
This is what people forget when they teach their children (and themselves!) how to memorize the ‘list’. So it becomes a ‘poem’ or a ‘song’ and more of a ritual than a spiritual journey.

And very important; how can you understand the Quran if you don’t know the One Who revealed the Quran?

Memorize & Understand the Names of Allah!

That’s why we are introducing a special learning experience on our website and our Facebook page; by not only memorizing 99 Names of Allah [swt] together, but also learning how to live with them!

What will you get?

We will introduce the Beautiful Names of Allah, Al Asmaa ul Husnaa, one by one. Most of the names are mentioned in the Quran so we will give you interesting clues and mini-assignments to look up yourself, in the Quran. So be active because it will increase your knowledge of the Quran at the same time!
To help you memorize the meanings of the Names we will cover a brief explanation and daily implementation of that Name in your life. So you will get each week:

Every week we will post an exciting article on one Name together with beautiful graphic to help you memorize the Name. Preceding this article you will get a flashing clue on Facebook the day before we reveal the week’s Name. So:
Like us on facebook.com/understandquran.com and simply follow the posts and keep your eye on the blog!

To the parents: involve the children and the whole family in this experience.

Join us in nothing but a journey to Paradise insha’Allah!

Allah mentions Himself by His Name Allah on 2699 occasions in the Quran. Allah is the Being Who comprises all the attributes of perfection. He is the one who possesses the best and the noblest qualities imaginable in the highest degree!

The One who is worshipped, The One who possesses the attributes of divinity

Allah has the root hamza-laam-haa. It refers to the One to whom the whole creation is enslaved, the One who is worshipped and adored and the One to whom all attributes of divinity belong.
This root appears 2851 times in the Quran in three derived forms. Examples of these forms are ilaaha (god), Allaahu ((is) Allah) and Allahumma (O Allah).

Linguistically, the word Allah refers to being a proper name and belongs to the true God, it is not derived from anything and the Al is inseparable from it; the word al-ilah (the god) is a different word. The word Allah is unique and it is the Name which refers to the Being Himself as His personal name and it encompasses all of the divine names and attributes of perfection.

Worship: a combination of love and obedience

The verb ‘abada – from the root ‘ayn-baa-daal – means to worship. But what is worshipping? Worship is a combination of love and obedience; love without obedience isn’t worship and obedience without love isn’t. Who deserves mankind’s utmost love and obedience? It is Allah ‘azza wa jall, the One who created in perfection mankind, the seven heavens and the earth and all they contain. Therefore no one but Allah ‘azza wa jall has the right to be worshipped. And the only way to loving and obeying Him is to know Him through what He has revealed about Himself in His Book, the Quran and the sunnah of His Messenger, Muhammad salallahu ‘alayhi wa sallam.

Most Beautiful Names and Attributes

The Names of Allah ‘azza wa jall are all husnaa (Most Beautiful), as He says: And to Allah belong the best names, so invoke Him by them.. [Quran, 7:180]. Al-Husnaa refers to the utmost beauty and each and every Name or Attribute includes the quality of perfection.

The Name Allah is the only Name of Allah ‘azza wa jall and the rest all refer to His divine Attributes (sifaat). The first and the last word of the adhaan (call to prayer) is Allah, the first word of salah (prayer) is Allah and in a typical prayer the word that comes most is Allah. As well, the beginning of our life starts with Allah (the adhaan) and our life should end by us saying: laa ilaaha illAllah- there is no god but Allah.

How can you live by this Name?

1.Believe in Allah.
Islam means you submit to your Creator and is based on five concepts. Performing five daily prayers, fasting in Ramadhan, pilgrimage to Makkah (Hajj) and paying zakat (charity for the poor) over your wealth are pillars of Islam. The first pillar is the testimony of faith (shahaada) which means believing in the existence and Oneness of Allah ‘azza wa jall and that Muhammad salallahu ‘alayhi wa sallam is the last Messenger. This faith – emaan- includes faith in Allah’s Angels, His Revealed Books, Messengers, the Afterlife and belief pre-destination. Daily renew your faith by saying laa ilaaha illAllah and know that Allah ‘azza wa jall only instructed you to worship Him only, after He reassured you He is the only One in control of all your affairs and the One closest to you: And We have already created man and know what his soul whispers to him, and We are closer to him than [his] jugular vein [Quran, 50:16].

2.Say and feel laa ilaaha illAllah.
Allah says: So know, that there is no deity except Allah and ask forgiveness for your sin..[Quran, 47:19] Do you truly feel it when you say laa ilaaha illAllah? This statement brought you into the safe threshold of Islam and your Creator chose you to be of those who are willing to utter it, unlike many others on this earth. The Prophet salallahu ‘alayhi wa sallam said: The best dhikr (remembering Allah) is laa ilaaha illAllah and the best supplication is al-hamdulillah [At-Tirmidhee, An-Nasaa’i, Ibn Maajah]. Each time you say there is no god but Allah – laa ilaaha illAllah- in prayer, as remembrance outside prayer etcetera, think about the real meaning of these words, increase in using this invocation and say it from your core!

3.Say bismillah.
The Prophet salallahu ‘alayhi wa sallam said: Any significant act that does not begin ‘in the name of Allah’ is severed (of blessings) [An-Nasaa’i] When you say the basmalah – the saying of bismillah –in the name of Allah- or bismillaahir rahmaanir raheem – it makes you conscious of Allah ‘azza wa jall, because you are invoking Him. When you say bismillah before beginning something, it means you are seeking Allah’s blessings and help in what you are going to do next. Make it a habit and teach it to your children, if they say the basmalah all throughout their lives and all their offspring until the Day of Judgement, it will an ongoing reward for you. This practice also helps you to tend to refrain from a sinful deed, as how can you start something wrong in the name of Allah? So say the basmalah when you eat, drink, undress, trip etc and make it your most productive habit.

4.Turn to Him.
Allah ‘azza wa jall describes the beautiful and direct relationship between Himself and the believer in a hadith qudsi: O son of Adam, so long as you call upon Me, and hope in Me, I shall forgive you for what you have done, and I shall not mind. O son of Adam, were your sins to reach the clouds in the sky and were you then to ask forgiveness of Me, I shall forgive you. O son of Adam, were you to come to Me with an earthful of sins and were you then to face Me, without having associated anything with Me, I shall grant you an earthful of pardon [At-Tirmidhee] Turn to Him in times of ease and hardship and you will find happiness and tranquillity which cannot be found in anything else than Him.

O Allah, we know that you are the One and Only God and you have no partners. Guide us to firm belief in you and aid us in acting upon this belief by doing deeds that will lead to your Pleasure. Make us of those who remember You often and make us turn to You at all times. Bless us with faith in You until our last moment and make us of those who will gaze at your beautiful Countenance in Paradise, ameen!