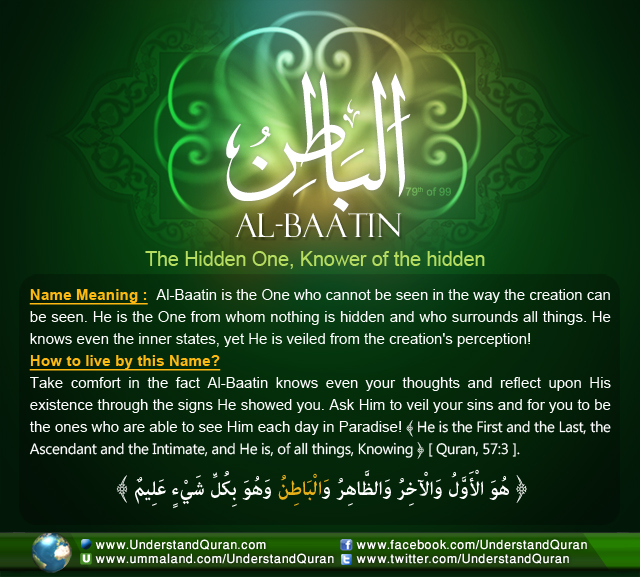 Allah calls Himself Al-Baatin— The Hidden, Knower of hidden things— once in the Quran. Al-Baatin is the One who is concealed and veiled from the creation’s perception. He is unseen in this world, yet His existence is apparent through His signs in the creation of which He knows all inner circumstances!

The Hidden and Intimate, Knower of the all the concealed

Baatin comes from the root baa-Taa-naa which points to two main meanings. The first meaning is to be concealed and lie hidden and the second is to be inside and penetrate into.

This root appears 25 times in the Quran in five derived forms. Examples of these forms are
batana (“is concealed”), butooni (“the wombs”), al butoona (“the bellies”) and baatinuhoo (“its interior”).

Linguistically, zhaahir and baatin are opposites where zhaahir refers to that which is manifest and apparent and baatin that which is inward and concealed. In Arabic, butn refers to the belly or womb, which is concealed inside the human body.
Both these opposites are united in the perfect Attributes of Allah ‘azza wa jall, who is both Azh-Zhaahir and Al-Baatin. He is the Manifest, everything becomes manifest through Him only and through His signs we know Him, yet we cannot perceive Him in this world.

The question of Musa

Al-Baatin says: When Musa came at Our appointed time and his Lord spoke to him, he said, ‘My Lord, show (Yourself) to me that I may look at You.’ He said: ‘You shall never see Me. But look at the mount. If it stays at its place, you will see Me.’ So when his Lord appeared to the Mount, it smashed, and Musa fell down unconscious. [Quran, 7: 143] In this ayah we find the proof that Allah ‘azza wa jall cannot be seen in this world.

Allah said that when Musa came for His appointment and spoke to Him directly, he asked to see Him, Allah said: Lan taraanee- You cannot see Me. `You cannot’ (Lan) by no means indicates that seeing Allah will never occur, as (the misguided sect of) Al-Mu`tazilah claimed. [Tafseer Ibn Katheer]
The biggest blessing in the Hereafter for the believers is when they are granted the ability to see Allah! Some faces that Day shall be radiant. Looking at their Lord [Quran, 75:22-23]

In earlier Scriptures, it was reported that Allah said to Musa, O Musa! No living soul sees Me, but will perish, and no solid but will be demolished [Tafseer ibn Katheer]

Allah is Al-Baatin and told Musa ‘alayhi sallam that it was not possible to view Him with his mortal eyes. We cannot perceive things that are hidden and we also are not able to view extremely bright images with our naked eye. However, we know through His actions and signs in and around us and through revelation that Al-Baatin is there and this way we have a little knowledge of what He is like.

Whenever you feel alone, scared and distressed know that Allah is the Knower of all hidden things, including your thoughts and inner states. He is the only One who truly knows you, so talk to Him in prayer and supplication, ask Him to help you and mend you and take comfort in the fact He is unseen yet the One who knows you best.

2. Be true inward and outward.

In surah Al-Hadeed Allah uses the word baatinuhoo, while describing the wall with a door that will be placed between the believers and hypocrites in the Hereafter, which interior contains mercy for the believers and zhaahiruhoo (its outside) is torment. And a wall will be placed between them with a door, its interior containing mercy, but on the outside of it is torment. The hypocrites will call to the believers, “Were we not with you?” [Quran, 57:13:14]

How come these people were locked out? What was their crime?  They will say, “Yes, but you afflicted yourselves and awaited [misfortune for us] and doubted, and wishful thinking deluded you until there came the command of Allah . And the Deceiver deceived you concerning Allah [Quran, 57:14] These people pretended to be with those who truly believed and prayed with them, but they indulged themselves in all types of temptations, they had doubts about Allah’s power and they thought easy of their sins until death came to them. This is how shaytan deceived them. The meaning here is that the believers will answer the hypocrites by saying, “You were with us in bodies which were heartless and devoid of intentions. You were cast in doubt and suspicion. You were showing off for people and remembered Allah, little.” [Tafseer ibn Katheer]

Learn from this and carefully look at your intentions, beware of showing off and remember Allah in words and deeds so you will be of those on the right side of the wall, in Paradise!

3. Remember Al-Baatin through His signs.

Even though you cannot perceive Allah ‘azza wa jall, you can remember Him and increase your love for Him by reflecting on the things He created in and around you. Jareer Bin Abdullah al-Bajali said: We were with the Prophet on a full moon night. He looked at the moon and said, You will certainly see your Lord as you see this moon, and there will be no trouble in seeing Him [Al-Bukhaaree, Muslim] Next time you see the full moon, feel the desire and think about the moment you will be able to see Al-Baatin in shaa Allah. This way reflecting on the creation will be a great emaan-boost!

The Prophet salallahu ‘alayhi wa sallam said: All of my ummah will be forgiven except those who sin openly. It is a part of sinning openly when a man does something at night, then the following morning when Allah has concealed his sin, he says, ‘O so and so, I did such and such last night,’ when all night his Lord has concealed him and the next morning he uncovers what Allah had concealed [Al-Bukhaaree, Muslim]

Never ‘boast’ about your bad deeds to your friends, nor try to expose the bad deeds of other people who did not sin openly and tried to conceal them!

O Allah, Al-Baatin, we know that You are the Hidden and Knower of all that is hidden. Help us to purify our intentions, protect us from hypocrisy and make both our inward and outward pleasing to You. Aid us in reflecting Your revelations and signs You placed around us, conceal our sins and protect us from exposing our sins. Make us of those able to see You in Paradise each day, ameen!