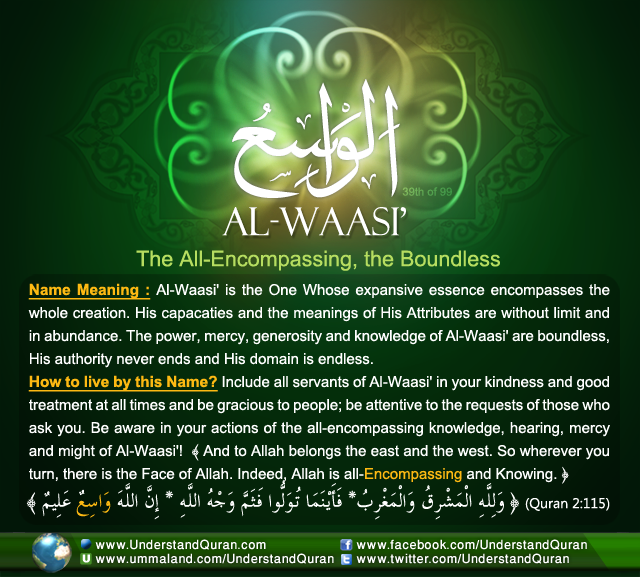 Allah calls Himself Al-Waasi’— The All-Encompassing, The All-Sufficient, The Bountiless— on nine occasions in the Quran. Al-Waasi’ is beyond any limits in essence and has boundless capacities. He encompasses the whole of creation with His blessings, care, and kindness. He is the Self-Sufficient and is sufficient for all. Nothing is beyond Him, and there are no limits to any of His attributes; the mind simply can’t grasp His essence and power!

The All-Sufficient, Bountiful, and All-Pervading

Waasi’ comes from the root waw-seen-ayn, which carries three main meanings. The first meaning is that of being vast, sufficient in capacity or size, and spacious. The second main meaning of this root is to be plentiful and bountiful. The third is to embrace, comprehend, and pervade.

This root appears 32 times in the Quran in six derived forms. Examples of these forms are wasi’a (encompasses), wus’ahaa (its capacity), and waasi’atun (spacious).

The concept of waasi’ in the Arabic language points out to something that has no limits; it’s something too vast to imagine. This attribute of Allah is in itself limitless, just like His other attributes, such as His Giving, Seeing, Hearing, and Knowing.

Al-Waasi’ Himself says: . . . But if they separate [divorce] Allah will enrich each, from His abundance. And ever is Allah Encompassing and Wise [Quran, 4:130] … That is the favor of Allah; He bestows it upon whom He wills. And Allah is all-Encompassing and Knowing [Quran, 5:54] … Indeed, your Lord is vast in forgiveness [Quran, 53:32]

A Formula for Success

Al-Waasi’ inspires to a beautiful supplication with an amazing, encompassing answer stating His attribute of wasi’a. He says: And ordain for us good in this world’s life and in the life hereafter, for surely we turn to you. He said: (As for) my chastisement, I will afflict with it whomsoever I please, and my mercy encompasses all things; so I will ordain it (especially) for those who guard (themselves against evil) and pay the zakat and those who believe in our signs. [Quran, 7:156]

This is your formula for success: in your heart, have fear, as Al-Waasi’ is the Only One who can punish whomever he wishes to punish. Have hope, because His mercy encompasses everything. In your actions stay away from evil, purify yourself and your wealth, and believe in the signs explained to you in the Quran and in the universe.

1. Increase in praising Al-Waasi’.  He is the One whose attributes are immense. Everything connected to Him is immense and perfect. Al-Waasi’ is as He praised Himself. We cannot praise Him as He deserves but we can try to remember and praise Him as much as we can. Are we really saying subhanAllah, alhamdulillah and Allahu akbar all through the day, whenever we have a spare moment? Do we really keep our tongue moist with the remembrance of Allah? Remind yourself of this great attribute of vastness and increase your daily dhikr!

2. Contemplate His kingdom.  His Kingdom encompasses everything we can see and not see. To appreciate the limitlessness of Al-Waasi’, look at His creations. Look at the sky and the galaxy, the balance, the perfection and the spaces in the universe that are still unknown to us. Al-Waasi’ says: and the heavens we raised high with power, and most surely we make things ample. [Quran, 51:4]

3. Ask Al-Waasi’.  His power encompasses everything and there’s nothing Al-Waasi’ can’t do. ‪He’s never distracted by anything in his infinite sphere of activities and knowledge. He has sufficient means to respond to each single request in His tremendous dominion. So ask Him for every need you have and turn to Him with every worry you feel.

4. Be an ambassador of good.  His dominion is incredible and vast. Al-Waasi’ placed you on this world and watches your every move. All you did, do, and will do is embraced by His knowledge. Your only God is Allah; there is no god but He; He comprehends all things in (His) knowledge  [Quran, 20:98]. Take your role on this earth seriously and be an ambassador of Islam by showing good manners and calling others to Al-Waasi’.

5.  Never despair in any characteristic of Allah.  Despairing in any capacity of Al-Waasi’ means you are putting a limit on the One whose abilities are beyond any limit; may Allah protect us from this thinking! If you think that He can’t forgive you because you’re too evil, you’re denying this attribute because His mercy is limitless! So never despair in any of His roles, whether The Provider, The Judge, The Answerer of Prayers; be firm in faith that all His capacities cannot be limited by anything or anyone.

6. Be aware of your actions. Al-Waasi’ says: And to Allah belongs the east and the west. So wherever you turn, there is the Face of Allah. Indeed, Allah is all-Encompassing and Knowing [Quran, 2:115] Even though this ayah was revealed regarding the direction of the prayer (qibla),  you can also let it inspire you to be aware in your actions of the all-encompassing knowledge, hearing, mercy and might of Al-Waasi’!

7. Embrace others with your kindness.  Include all servants of Al-Waasi’ in your kindness and good treatment at all times and be gracious to people and be attentive to the requests of those who ask you.

O Allah, Al-Waasi’, we know that You are the One who encompasses everything and everyone. Make us of the dhaakireen— those who constantly remember Your vastness and perfection and whose actions reflect this awareness. Inspire us to contemplate Your endless dominion and make us turn to You for every request. Guide us in being good, kind, and just ambassadors of Your religion on this earth, and enable us in our faith to never doubt any of Your characteristics. Ameen!

PS: Have you signed up for our newsletter? Sign up now and receive the free welcome gift to the series The Names of Allah.