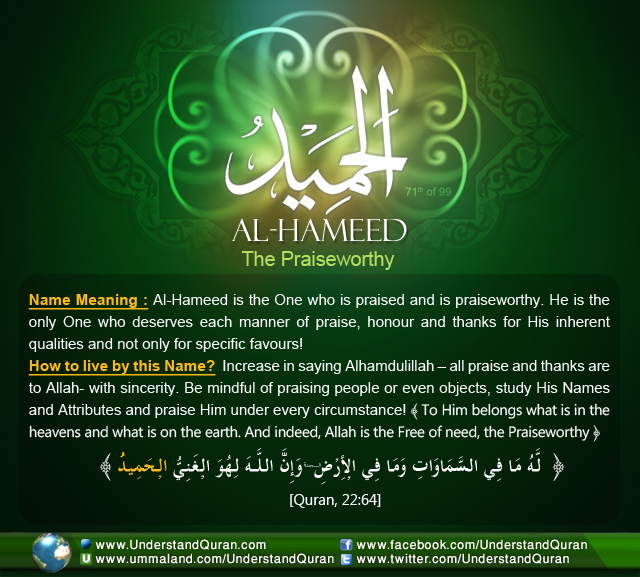 Allah calls Himself Al-Hameed— the Most Praiseworthy , the Praised One — on ten occasions in the Quran. He is the One who deserves all praise and honour. Al-Hameed is the only One who is truly worthy of all praise and thanks!

The Praiseworthy, the object of praise

This root appears 63 times in the Quran in five derived forms. Examples of these forms are al hamdu (all praise be to), al-haamidoona  (those who praise), and mahmoodan  (praiseworthy).

Linguistically, hamd is based on mahabbah (love) and ta’dheem (honour) and it implies admiration and gratitude towards the one who is praised (mahmood). Allah is Al-Hameed, He is the One who is always deserving of praise, regardless if He is being praised or not.

Believers say alhamdulillah– All praise and thanks are for Allah each day in prayer in Surah Al-Fatiha, the first word of Adam ‘alayhi sallam was alhamdulillah and alhamdulillah will be the last call of the people of Paradise: وَآخِرُدَعْوَاهُمْأَنِالْحَمْدُلِلَّهِرَبِّالْعَالَمِينَ . . . And the last of their call will be, Praise to Allah, Lord of the worlds! [Quran,10:10]

Whereas hamd means praise, the ‘al’ in al-hamd makes the praise definite and implies exclusivity. Al-hamd means all types of praise and every manner of thanks at all times is due to Allah ‘azza wa jall. Abu Ja`far bin Jarir said: The meaning of alhamdulillah is: all thanks are due purely to Allah, alone, not any of the objects that are being worshipped instead of Him, nor any of His creation. [Tafseer ibn Katheer]

Alhamdulillah therefore can be best described by the most complete, perfect, and beautiful praise that is deserved by and for Allah ‘azza wa jall only!


Alhamdulillah in the Quran

The phrase alhamdulillah occurs 38 times in the Quran and it is the praise Allah ‘azza wa jall praised Himself with. Some suwar (plural of surah) of the Quran begin with hamd, which announces that all praise and thanks belong to Allah ‘azza wa jall,  instructs that when we begin something we should begin with praise (like in a sermon or when making dua’) and shows us how to praise Allah– by saying alhamdulillah.

2. Increase in saying alhamdulillah and feel it.
Increase in saying this beautiful praise in your daily life. And say it out of deep love, honour, and with humility and gratitude to your Lord.  Remember Paradise when you say alhamdulillah, and ask Allah ‘azza wa jall to make you of those who say: Their call therein will be, ‘Exalted are You, O Allah,’ and their greeting therein will be, ‘Peace.’ And the last of their call will be, ‘Praise to Allah , Lord of the worlds.’ [Quran, 10:10]

3. Say it when you are blessed.
The Prophet salallahu ‘alayhi wa sallam said: No servant is blessed by Allah and says, alhamdulillah except that what he was given is better than that which he has himself acquired. [Ibn Maajah]

4. Know that everything happens for good.
For the believers there is always a win-win situation. The Prophet salallahu ‘alayhi wa sallam said: The affair of the believer is amazing. The whole of his life is beneficial, and that is only in the case of the believer. When good times come to him, he is thankful and it is good for him, and when bad times befall him, he is patient and it is also good for him. [Muslim] Deeply reflect on this hadith and say: alhamdulillah ‘alaa kulli haal– alhamdulillah in every case or situation!

O Allah, Al-Hameed, we know that all praise and thanks belongs to You. Make us of those who praise You as you should be praised, guide us in praising you often and sincerely, and make us of those who say alhamdulillah in Paradise, ameen!