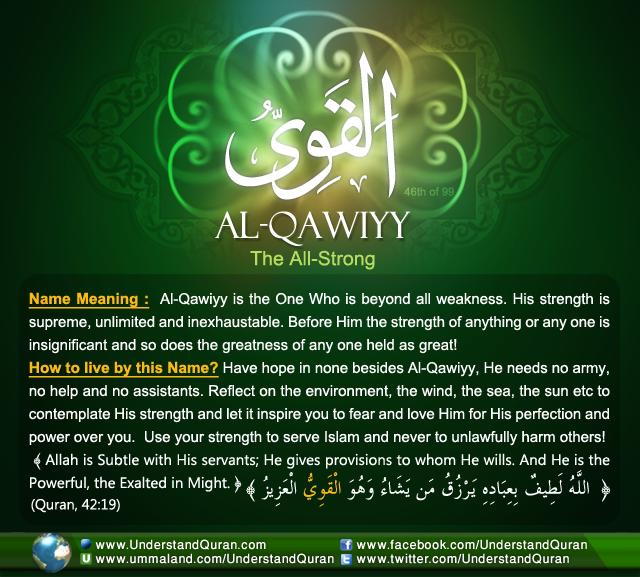 Allah calls Himself Al-Qawiyy— The All-Strong, The Powerful— on nine occasions in the Quran. Al-Qawiyy is the only One Whose strength is unlimited, inexhaustible, and neither preceded by weakness nor followed by a loss of strength. He affects everything yet nothing can affect Him!

The Supremely Strong, The Perfect in Strength

This root appears 42 times in the Quran in three derived forms. Examples of these forms include bi quwwatin (“with strength”) and lil-muqween (“for the wayfarers in the desert”).

Linguistically, qawiyy is derived from quwwa, the attribute of strength. Al-Qawiyy is the Ultimate in Strength; His attributes of strength never decrease and never have to be followed by a period of rest. The perfect strength of Al-Qawiyy is irresistible, and nothing and no one in the heavens and the earth can help but submit to it!

Al-Qawiyy Himself says: . . . They disbelieved in the signs of Allah , so Allah seized them for their sins. Indeed, Allah is Powerful and severe in penalty. [Quran, 8:52] And sufficient was Allah for the believers in battle, and ever is Allah Powerful and Exalted in Might.[Quran,33:25]

Al-Jabbaar, Al-Qahhaar, Al-‘Azeez, and Al-Qawiyy are all names of power, strength, and dominance.   Allah’s name Al-Qawiyy is most often paired with His beautiful name Al-Azeez, The All-Mighty. Strength is not suited except to those who are honorable; Al-Qawiyy uses His Strength in the most honorable ways to show His perfect might. This combination is used in the context of Allah ‘azza wajal using His strength to support the believers against the tyrants and unjust while using His might to punish them.

Just as Allah is The All-Knowing and loves to see you knowledgeable, and just as and He is The Just and loves to see you being just, Allah ‘azza wajal loves to see the quality of quwwa in you as a believer. The Prophet salallahu ‘alayhi wasallam said: A strong believer is better and more beloved to Allah than a weak believer, though both are good. Hasten to what benefits you, seeking Allah’s help, and do not feel defeated. If some misfortune befalls you, do not say: “If only I had done such-and-such…” but say: “It is what Allah decreed, and He does as He wills.” The words “If only…” open the doors for Satan’s machinations. [Muslim] Have quwwa in your faith, in your determination to enjoin good and forbid evil, in your war against shaytan, in your character and in your will to seek knowledge!

2. Strive for justice and rest assured against the unjust.

Al-Qawiyy detests strength based on tyranny and injustice. The Prophet salallahu ‘alayhi wa sallam said: No nation is blessed unless its weakest members can demand their rights without hesitation. [Sunan Ibn Maajah] Be a person in your community who finds it important to be just in even the smallest matters, and inspire others to be just and to stand up for the rights of the weak. Rest assured in the promise of Al-Qawiyy to those who support His cause: Allah will certainly aid those who aid His (cause), for verily Allah is Strong, Mighty. [Quran, 22:40]

Al-Qawiyy gave one angel the strength to overturn a whole city or uproot a mountain, and this angel and all others, despite their enormous strength, tremble out of awe and fear of His greatness. So what about us— which powers do we have? Fear Al-Qawiyy and recall His strength to motivate yourself when you’re about to do something wrong.

4. Reflect the creation of Al-Qawiyy.

Look at the strength of the heat of the sun: in hours it can melt huge ice surfaces which could not be demolished by mankind’s strongest machines. Reflect on the power of the wind, which can lift up whole villages and blow them in the air like a feather. Contemplate the might of the oceans, swallowing complete countries. Reflecting on creation will help you understand the greatness and mind-blowing strength of the creator. Contemplate the signs of Al-Qawiyy and act upon them by obeying His commands and staying away from His prohibitions.

Despite His enormous might and strength, Allah ‘azza wajal is extremely gentle and subtle with His servants. Allah is Subtle with His servants; He gives provisions to whom He wills. And He is the Powerful, the Exalted in Might. [Quran, 42:19]  Take comfort in Him, your protector, your perfect beloved, in times when you feel weak and overcome by worries and difficulties.

O Allah, Al-Qawiyy, we know that Your Strength is perfect and complete . Make us strong believers and aid us to use our strength to strive for justice. Adorn us with reliance on your promise against the unjust and enable us to be comforted by our knowledge of Your Strength. Inspire our minds to reflect on Your Creation and fill our hearts with fear and awe for Your Greatness and irresistible Strength, ameen!