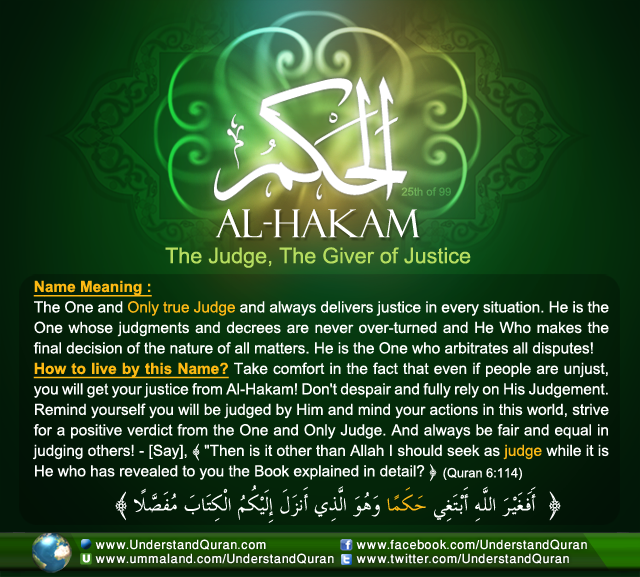 Allah’s name Al-Hakam— The Judge, The Giver of Justice, The Arbitrator— occurs on one occasion in the Quran. He is the One who always delivers justice, in every situation, to everyone. Al-Hakam never wrongs anyone and is never oppressive, He is the only true judge; no one can overturn His judgment and no one can ever appeal His decree!

The Giver of Justice, The One Who Arbitrates

Hakam comes from the root haa-kaaf-meem, which refers to the attribute of judging, being wise, passing a verdict, and preventing or restraining people from wrongdoing.

This root appears 210 times in the Quran in 13 derived forms. Examples of these forms are hakama (to judge), al-hukm (the command, wisdom, judgement), hikmah (wisdom), and Ahkamu (Most Just).

Linguistically, hakam and hakeem are from the same root; hakam is a verbal noun and emphasizes the act of delivering justice whereas hakeem refers to the essential nature of the possessor of wisdom. Al-Hakam refers to the totality of Allah’s power to judge and arbitrate with perfect justice and immense mercy, which cannot be compared with the judging and arbitrating of any other created being.

Al-Hakam Himself says: Then is it other than Allah I should seek as judge while it is He who has revealed to you the Book explained in detail? [Quran, 6:114]

The best of judges

Al-Hakam deals with all the affairs of creation— isn’t that amazing? He beautifully says: All those who are in the heavens and the Earth ask of Him; every moment He is in a state (of glory). [Quran, 55:29]
Al-Hakam makes certain deeds lawful and other deeds unlawful; He instructs us to do certain things and prohibits us from doing others. He has complete legislative power and His discree can’t be overturned by anyone, because He says: His is the creation and His is the command. [Quran, 7:54].

Whatever Al-Hakam legislates for us is never burdensome and never unfair. He laid down the perfect rules to protect the rights of everyone— men and women, the righteous and the sinner, the believer and the unbeliever.

When someone converts to Islam, Al-Hakam forgives all of his previous sins and evil deeds. A man called Amr came to the Prophet Muhammad and said, Give me your right hand so that I may give you my pledge of loyalty. The Prophet stretched out his right hand. Amr withdrew his hand. The Prophet said: What has happened to you, O Amr? He replied, I intend to lay down a condition. The Prophet asked: What condition do you intend to put forward? Amr said, That Allah forgives my sins. The Prophet said: Didn’t you know that converting to Islam erases all previous sins? [Muslim] This is the beautiful justice of Allah ‘azza wa jall. Alhamdulillah ‘alaa ni’matul Islam— Praise be to Allah for the blessing of Islam.

1. Trust in Al-Hakam at all times.
Take comfort in the fact that even if people are unjust, you will get your justice from Al-Hakam! Don’t despair, and fully rely on His judgment. Al-Hakam says: Follow what has been revealed to you, and be steadfast until Allah’s judgment comes. He is the Best of Judges. [Quran, 10:109]

2. Be motivated to do good deeds.
Al-Hakam is wise. He is the ultimate Judge, and He decreed that you don’t have to bear the sin of another. You’ll never ever be wronged by Al-Hakam; you’re never punished for more than the sin you commit, nor will any good deed go without a reward.
This is the justice-system of Al-Hakam: Whoever brings a good deed shall have ten times the like thereof to his credit, and whoever brings an evil deed shall have only the recompense of the like thereof, and they will not be wronged. [Quran, 6:160]. Let this motivate you to take each chance to do a good deed; benefit from your health, wealth and free time by using them wisely.

4. Remember Al-Hakam and stand up for the truth.
Remind yourself that you will stand before Him one day to be judged by Him. Make this your motivation to mind your actions in this world. Always stand up for truth and justice, even if it’s against yourself. Strive for a positive verdict from the One and only judge.

5. Always be fair and equal in judging others!
Whenever you’re in a position to judge between parties, for example a family affair, always be equal and just. Al-Hakam says: Behold, Allah bids you to deliver all that you have been entrusted with unto those who are entitled thereto and whenever you judge between people, to judge with justice. [Quran 4:58]

6. Never object to the decree of Al-Hakam.
Whenever Al-Hakam decrees something, He does so with perfect wisdom. Never object to the decree of Al-Hakam by complaining about your fate and questioning Him (e.g. oh, why do I have to go through this?) Only people who don’t understand Allah’s names and attributes will question Him, so make it a striving to study al Asmaa ul husnaa.

O Allah, Al-Hakam, we know You are the Perfect Judge. Aid us to adhere to your legislation in our daily lives, make us of those who are equal and just to others and of those who always stand up for the truth. Protect us from the injustice of others, adorn us with reliance upon You and Your justice at all times, ameen!

The Understand Quran Academy Team
PS: Did you already sign up for our newsletter? Sign up now and receive the free welcome gift to the series The Names of Allah!