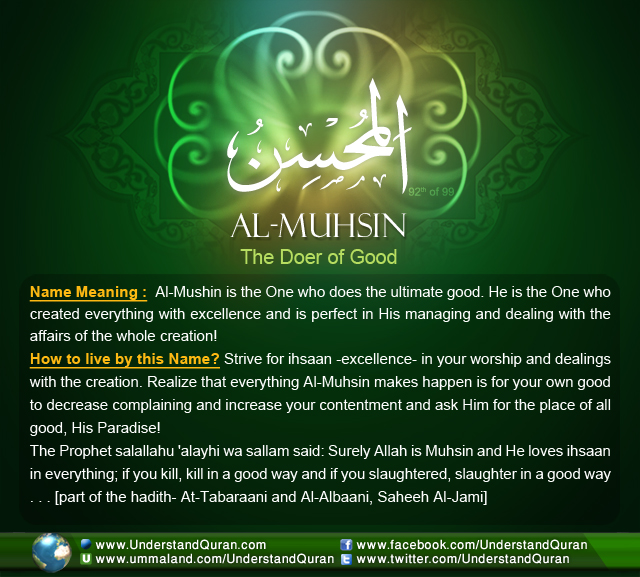 Allah’s name Al-Mushin— The Good Doer, the one who does ultimate good— is not mentioned in the Quran but occurs in narrations of the Prophet salallahu ‘alayhi wa sallam. Al-Muhsin is the one who loves and inspires doing good in His slaves and who possesses the perfect good and excellence in all He makes happen!

The Good Doer, the Supreme Doer of Good

This root appears 194 times in the Quran in 12 derived forms. Examples of these forms are ahsana (“does good”), ahsanu (“is best”), husnan (“good”) and al-muhsineena (“the good doers”).

Linguistically, hasana is the root for the words hasan (good), ahsan (better), and (al) husna (the best). The Islamic concept of ihsaan, or excellence, comes from the same root. A muhsin (male, plural muhsineen) and a muhsina (female, plural muhsinaat) are those who do good and who when saying someone did well, can say: ahsant (-i or –a), which means “well done” or “excellent!”

Al-Muhsin refers to the One who is perfectly good in His Essence and who does all His actions in the best possible manner, achieving excellence and reaching ultimate beauty and perfection.

The Prophet salallahu ‘alayhi wa sallam said: Surely Allah is Muhsin and He loves ihsaan in everything; if you kill, kill in a good way and if you slaughtered, slaughter in a good way . . . [part of the hadith- At-Tabaraani and Al-Albaani, Saheeh Al-Jami]

There are three degrees of Islam, which are Islam, eemaan, and ihsaan.  Islam means submission, and when mentioned separately from emaan it refers to the religion as a whole, as Allah says:  Truly, the religion with Allah is Islam. [Quran, 3:19] When Islam is used with the word eemaan (faith or belief) it refers to outward deeds and words, as Allah says:  The bedouins say: ‘We believe. Say: You believe not but you only say, We have surrendered (in Islam), for Faith has not yet entered your hearts…’ [Quran, 49:14]

The second degree is eeman, which means belief committed to submission and may mean one of two things. When it is used without the word “Islam,” it refers to the religion as a whole, as Allah ‘azza wa jall says:  Allah is the Wali of those who believe. He brings them out from darkness into light. [Quran, 2:257]

Allah limited the word emaan to those who adhere to His religion in full, inwardly and outwardly, as He says: The believers are only those who, when Allaah is mentioned, feel a fear in their hearts and when His Verses are recited unto them, they increase their Faith; and they put their trust in their Lord. [Quran, 8:2] When emaan is used with the word Islam it refers to inward beliefs, or the actions of the heart.

Thus, when either emaan or Islam are used alone, there is no difference and they both refer to the entire religion. If there is any difference between them, Islam refers to outward physical actions and the word eemaan refers to inward actions of the heart.

The third degree is ihsaan, which in Arabic means doing something well, perfectly, and sincerely. Islamically it may mean two things: when used alone and not with Islam or eemaan it refers to the religion as a whole.

When it is used with either or both Islam and eemaan the meaning is perfecting one’s outward and inward deeds. The Prophet salallahu ‘alayhi wa sallam beautifully explained the meaning of ihsaan: It means worshipping Allah as if you can see Him, and although you cannot see Him, He can see you. [Al-Bukhaari, Muslim]

1. Strive for ihsaan.
Ihsaan is a complete way of life, so let this concept accompany you in all your actions. Strive for al-ihsaan in your relationship with Allah ‘azza wa jall as in being able to worship Him as if you saw Him and strive for al-ihsaan as good behaviour to others, like kindness to your parents, relatives, the poor etc.

When you have a guest, give them the best you have. When you are with your parents, show them the best of your manners. Also appreciate the ihsaan of others.

Strive for al-ihsaan as an act of excellence and in your relationship with yourself, meaning in every deed you do, you try your best! When you are at your job, do your best, when you are at school, try your best. The Prophet salallahu ‘alayhi wa sallam said: Allah has prescribed al-ihsaan in every matter. [Muslim] SubhanAllah, we are even asked as Muslims to sharpen the knife when we slaughter as to cause minimal distress to the animal.

2. Study the Quran to find out what is good.
On many occasions in the Quran the muhsineen, the good doers, are mentioned. The muhsineen are loved by Allah ‘azza wa jall and close to Him and Allah even describes actions characterizing them, pay special attention to these ayaat. Allah says: And whoever submits his face to Allah while he is a doer of good (muhsin) – then he has grasped the most trustworthy handhold . . .[Quran, 31:22]

Make it your mission to find out what the Quran says about what are good deeds and what their reward is, so you can apply them and become of the muhsineen inshaa’Allah!

3. Realize that Allah’s ways are excellent.
Allah is the only true Mushin. He is perfect in His Names, attributes, and actions. Truly realize that everything Allah ‘azza wa jall gives and takes from you, is for your own good, and let this inspire you to complain less and start being more content. Allah’s ihsaan is general with the whole creation; He created you in a perfect way without being asked and His ihsaan is specific. He rewards the good doers with the place of ultimate good: His Paradise!

4. Ask Al-Muhsin.
Allah ‘azza wa jall says in a heart-melting ayah in Surah Ar-Rahmaan: Hal jazaa’ul ihsaani illal-ihsaan – Is the reward for good [anything] but good? [Quran, 55:60]  Each day ask Al-Mushin for ihsaan in all aspects of your life, in your inward and outward actions. Do you worship Allah as if you see him or at least as he sees you? Ask Him to bless you with the highest degree of ihsaan: apart from being aware He sees you, worshipping Him as if you see Him!

5. Study the names of Allah.
The beautiful names of Allah are called al asmaa ul husnaa. Study them and most importantly, live by them. https://understandquran.com/99-names-of-allah-asma-ul-husna

O Allah, Al-Mushin, we know that You are Doer of ultimate good. Adorn us with ihsaan in all our aspects of life and make us worship you as if we see You.  Include us in the rewards of the muhsineen and make us live by the fact You are perfect and beyond excellence in Your dealings with us. Bless us with good in this life and the ultimate good in the Hereafter, seeing You in Paradise, ameen!

Get the print version of the first book in this beloved series! Order Book 1: 99 Names of Allah – Asma ul Husna here.