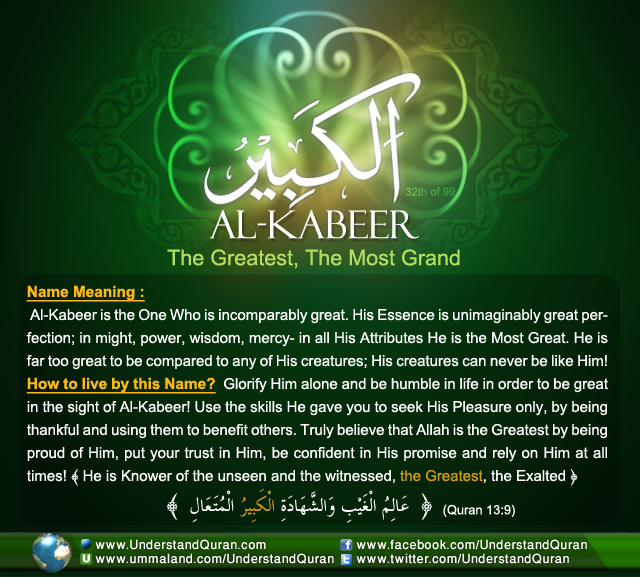 Allah calls Himself Al-Kabeer— The All Great, The Most Great, The Grand— on six occasions in the Quran. He is the One who is unimaginably great and perfect. Al-Kabeer embraces all kinds of greatness, from rank, size, nobility, and knowledge to mercy, and it tells us that nothing was, is, or will ever be like Him!

The All-Great, the One Far Greater Than Anything or Anyone

This root appears 161 times in the Quran in eighteen derived forms. Examples of these forms are kabura (“is great,” or “is difficult”), fakabbir (“magnify”), mutakabbireen (“the arrogant)”, akbaru (“greater”), kibaru (“old age”), and kubra, kabeer (“great”).

Linguistically, kibriyyah refers to the concept of greatness. One who is kabeer is someone great in rank or skill. Allah is Al-Kabeer—The All-Great and The Most Great; for each of His attributes He is the greatest.

The Ranks of This World and the Hereafter

We’re naturally predisposed to admire those who are most beautiful, most intelligent, most eloquent, most powerful, most generous, most merciful, etcetera.
However Al-Kabeer Himself says: See how We prefer one above another (in this world), and verily, the Hereafter will be greater in degrees and greater in preferment [Quran, 17:21]. The poorest in this world can be the richest in the Hereafter; it all depends on one thing: your rank with Allah al-Kabeer.

1. Say a lot of takbeer.
Revive the sunnah of The Prophet ‘salallahu ‘alayhi wa sallam by saying a lot of takbeer— Allahu Akbar. Abdullah ibn ‘Umar narrates that a man came late to Salāh. Upon arriving to the line he started his prayer with the following words, Allāhu Akbaru Kabīran wal-hamdulillahi kathīran wa subhān Allahi bukratan wa asīlā. The Prophet, after completing the prayer, asked the people who had said this. The man said, O Rasūlullah, I did not intend by it other than good. The Prophet salallahu ‘alayhi wa sallam said, I saw the gates of heaven open because of those words. Ibn ‘Umar added, I never ceased saying these words since hearing the Prophet say that. [Muslim, At-Tirmidhee, An-Nasaa’i and Ahmad]

2. Find happiness with Al-Kabeer.
Your original nature makes you seek love and perfection and Allah Al-Kabeer is the source of all perfection. So only by turning to Him can your heart feel peace and happiness. In fact, the more you get to know about Him, His names and His attributes, the more you’ll turn to Him with true love and devotion and feel secure and peaceful with Him.

3. Magnify Al-Kabeer in the proper way.
Allah ‘azza wa jall instructs you: And magnify Your Lord [Quran, 74:3]. Words to magnify Al-Kabeer, like the tahleel (laa ilaaha illAllah) tahmeed (Alhamdulillah), tasbeeh (subhanAllah) and takbeer (Allahu akbar), have great meanings; ponder their true meanings, increase in saying them and be careful not to misuse them.

4. Seek perfection at the source.
Don’t disappoint yourself by expecting others to be perfect and admiring those with wealth or status but no emaan. By admiring your Lord, by relying on and trusting in Al-Kabeer, The All-Great, The Source of Perfection, you will never be shocked or disappointed, even better you will be amazed by His enormous rewards for your little deeds.

5. Never be arrogant.
Guard yourself against arrogance (kibr). Never look down on others; you don’t know the rank they have with Al-Kabeer. Arrogance can also be found in how you deal with the commands of Allah. Look at the sin of Iblees; he refused to bow down due to arrogance. A good tip to keep you away from disobedience to the commands of Allah is that whenever you’re about to sin, look up and imagine Al-Kabeer watching you— would you dare to look up and say “no” to Him?

6. Strive for a high rank with Al-Kabeer.
Glorify Him alone and be humble in life in order to be great in the sight of Al-Kabeer. If Allah Al-Kabeer blessed you with being kabeer in this world in knowledge, job position, or any other skill, make others benefit and truly become kabeer to Him in the Hereafter.

7. Call upon Al-Kabeer.
Make dua using this name to ask Him to lead you to deeds pleasing to Him. There is no rank higher or achievement better than attainment of Allah’s good pleasure. It is as Al-Kabeer says: Verily, to Us will be their return; and then verily, for Us will be their reckoning. [Quran, 88:25-26] Always aim high in your supplications— ask Him for Jannatul Firdaws, the higest paradise, without reckoning.

8. Be proud of your Lord.
You shouldn’t be ashamed of Allah’s religion or divine commands. When you’re offered wine to drink, don’t apologize and make excuses like, “Sorry! I have a stomach ache.” You should proudly say, “I do not drink wine because it’s forbidden in my religion of Islam.” If you really believe that Allah is Al-Kabeer, you should be proud of your Lord in all situations, places, and company.

9. Feel your takbeer.
What is really akbar in your life? The Prophet salallahu ‘alayhi wa sallam taught you to say Allahu akbar at the start and during your whole salah. Whenever you say, or hear, Allahu Akbar in prayer or the adhaan (call to Prayer), know what it really means. Know that Al-Kabeer is far greater than anything that you could ever imagine or think of. When you raise your hands to start your prayer, imagine you’re throwing the whole world behind you and all is about Allahu akbar.

O Allah, Al-Kabeer, we know that Your Greatness is perfect and beyond our imaginations. Help us to reflect on Your greatness in order for us to stay close to Your commandments. Inspire us to magnify you in a proper way. Adorn us with pride in Islam, protect us from arrogance, and make us of those who attain the highest ranks with You in the Highest Paradise without reckoning, ameen!