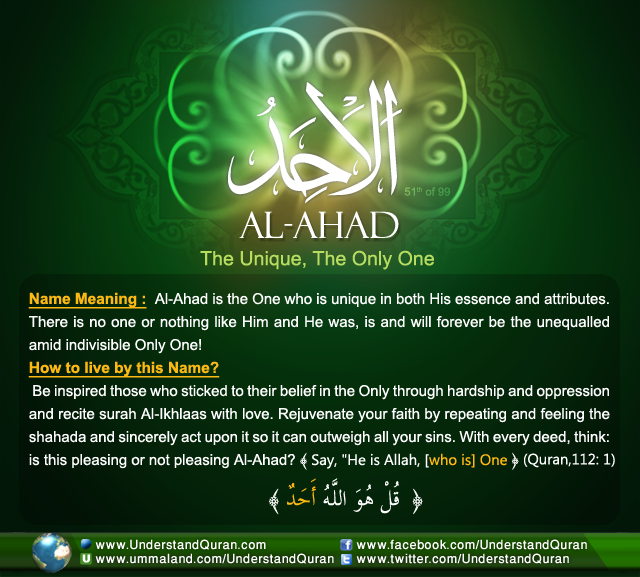 Allah calls Himself Al-Ahad— The Only One, the Unique— on one occasion in the Quran. Al-Ahad is the One who was, is, and will ever remain alone. He is indivisible and the essence of unity, and nothing or no one can ever be equal to Him in essence in all His beautiful attributes!

The Sole One, The Unity

Ahad comes from the root hamza-haa-daal, which points to two main meanings. The first meaning is to be the only one and sole. The second main meaning is to unite or unify.
This root appears 85 times in the Quran in 2 derived forms. Examples of these forms are ahadun (“anyone”), ahadukum (“one of you”) and ihdaa (“any, one”).

Linguistically what is ahad cannot be divided into parts, whereas that which is waahid appears to be divisable into separate parts. Some (scholars) differentiated between al-Waahid and al-Ahad by saying that al-Waahid refers to His being one in His essence only, whilst al-Ahad means that He is one in both His essence and His attributes [Tafseer Asmaa’ Allaah by al-Zajjaaj, p. 58]

And it was said that al-Waahid means He is unique in His essence and does not have any peer or rival, and al-Ahad is unique in His attributes. So al-Waahid is one in and of Himself, and al-Ahad means being one in His attributes. Al-Ahad is one of the attributes of Allah which belong uniquely to Him, and in which nothing else has a share. (Lisaan al-‘Arab –Ahad – 1/35; wahida 8/4779 – 4783).

Bilal radiyallahu anhu was a slave of Ummayah Ibn Khalaf, who was furious when he found out about his belief in the Oneness of Allah. Each day he would put Bilal in the heat of the sun denying him food or water and he ordered others to place a large rock on his chest so he could hardly breath. He continued crushing him saying, “I will never stop torturing you, until either you die or you declare kufr in Muhammad (saw) and you return back to worshipping the Lat and Uzzah.” In extreme hardship and under the pressure of the rock on his chest Bilal spoke his famous words of unshakeable faith which are an inspiration to all believers:
“Ahadun Ahad”, “The One! The One!” After eleven days of torture Abu Bakr radiyallahu anhu bought Bilal and set him free. The Prophet salallahu alayhi wa sallam himself soon selected Bilal for one of the most honourable tasks: the mu’addhin, the caller of the adhaan, every day proclaiming the Oneness of Allah, Al-Ahad!

1. Feel the testimony of faith.
Understand the shahada by studying its meaning and implications. Reflect on your relationship with the shahada and how both your limbs and heart should be connected to it. Remind yourself of all those believers who sacrificed all they by proclaiming the testimony of faith. Think of the wife of Firawn, the People of the Trench, the early Muslims of Makkah and all those men and women who are being pursued just for having faith and feel the power of the shahada! And they resented them not except because they believed in Allah [Quran, 85:8]
Next time you pray really feel it when you say laa ilaaha illAllah, He is the Only!

2. Fight your desires.
We know Al-Ahad is the Only but do we make Him the Only we listen to, work for, ask from and submit to in our daily life? How many times do you do something you think is important rather than what is truly important in the eyes of Al-Ahad? Fight your ego and make pleasing Him your only goal. Have you seen he who has taken as his god his [own] desire...[Quran, 45:23]

3. Repeat the shahada throughout the day.
The Messenger of Allah salallahu alayhi wa sallam said: The best Dhikr (remembering Allah) is La ilaaha illallah and the best supplication is Al-Hamdu Lillah. [At-Tirmidhi, An-Nasa’i and Ibn Majah]

4. Make your intentions for Him only.
Imagine a cup of white, pure milk, if there was one drop of blood or dirt in it, the whole colour would change and you would not drink it! Once you understand the shahada you know your intentions should be for Allah only. Think about the intention you have with every deed. For example if you feel angry when someone doesn’t acknowledge what you did for them, examine yourself and think, did I do this purely for Allah or was my intention mixed with something else? Start for one week to make everything you do to please Him only and taste the unique sweetness. When you are working, think you are pleasing Him by taking care if your family, when you are tending the children make the intention you want to raise them to worship Al-Ahad only, when you help someone, help them for the reward of Al-Ahad only!

5. Make surah Al-Ikhlaas your life’s motto!
Apart from reciting it in your prayer, have you ever thought what this virtuous surah means to your daily life? This surah inspires you to sincerity in all you do and live for the Only, Al-Ahad. He rewards your good deeds according to their sincerity, your sincerity is the key to your eternal success and without sincerity all your deeds are worthless! Say, ‘Surely my prayer and my devotion, my life and my death are all for Allah, the Lord of the Worlds.  No partner has He, and this is what I have been commanded [Quran, 6:162 ] This means not only act of worship like prayer and fasting, but you should have the intention to please Al-Ahad in spending money, dealing with colleagues, your family etc.

6. Ask Al-Ahad.
Ask Him, turn to Him and beg Him only for your every need. Ask Him to help you to purify your intentions.

To read about the importance of intention, click here.

O Allah, Al-Ahad we know that You are the Only.  Bless us with pure intentions and help us to do those deeds most pleasing to You. Guide us to understand, live, and die by the shahada so the fire cannot touch us, and we will enter Your everlasting gardens, ameen!