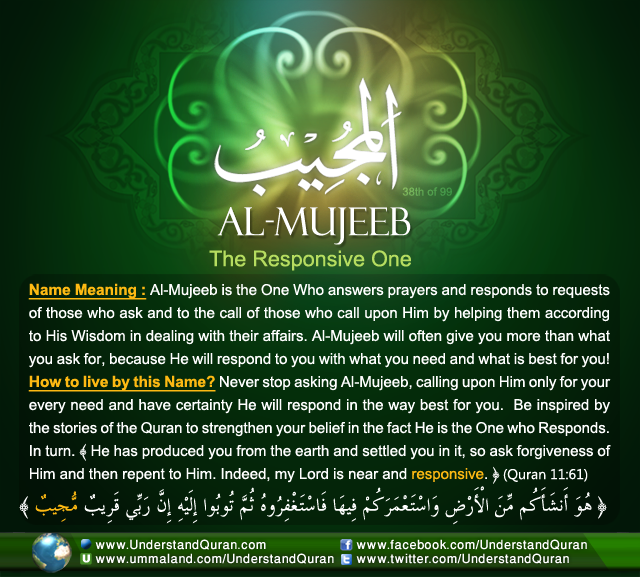 Mujeeb comes from the root jeem-waw-baa, which points to three main meanings. The first meaning is to answer, reply, respond, and accept. The second main meaning is to cut, pierce, or penetrate and the third is to have a dialogue or conference.

This root appears 43 times in the Quran in five derived forms. Examples of these forms are ujeebu (“I respond”), jaboo (“carved out”), istajaaboo (“respond”) and jawaabaa (“(the) answer”).

Responding to Each Request with Ease

The name Al-Mujeeb is related in meaning to Al-Hakeem (The All-Wise), Al-‘Aleem (The All-Knowing), As-Samee’ (The All-Hearing), Al-Baseer (The All-Seeing), Al-Wahhaab (The Giver of Gifts) and Al-Kareem. He responds to our requests in a way that displays His ultimate wisdom and knowledge. While we call out to Him He is All-Hearing and All-Seeing and He often gives us more than we deserve or even ask. He is the Most Generous.

His amazing power and wisdom in responding to our requests is demonstrated in this part of a beautiful hadith qudsi:
. . . O My servants, were the first of you and the last of you, the human of you and the jinn of you to rise up in one place and make a request of Me, and were I to give everyone what he requested, that would not decrease what I have, any more that a needle decreases the sea if put into it.. [Muslim, at-Tirmidhi and Ibn Majah]

1.      Respond to the call of Al-Mujeeb.
Al-Mujeeb says: When my servants ask thee concerning Me I am indeed close (to them); I listen to the prayer of every suppliant when he calls on Me; let them also with a will listen to My call and believe in Me; that they may walk in the right way. (Quran 2:186) Your share in this Name is that you are responsive to the commandments of Al-Mujeeb!

2.      Know the art of asking.
Ask for His forgiveness before you ask for anything, as was the formula of the Prophet Yunus ‘alayhi sallam when he desperately needed his supplication to be answered to be saved from the belly of the whale. Ask Al-Mujeeb for everything (halal) you wish in the Hereafter but also in this world. He loves it that you ask Him for everything you need in your deen and dunya (worldy matters). Ask him for clothing, a house to live in, food, drink, guidance, success etc.

3.      Think good of Al-Mujeeb.
Al-Mujeeb does not disappoint a believer who calls upon Him, however don’t be hasty as His delay is not His denial. The answer to your dua’ might come in a different form or time you wanted or expected. Made under the right circumstances – such as not earning haram income when asking Him or asking Him for something haram, like cutting of family ties – Al-Mujeeb responds to your dua, postpones it or prevents something bad from happening.

4.      Practise four powerful Quranic supplications for four powerful responses.
Al-Mujeeb relates to you the responses He gave after being supplicated to in different types of hardship. So whenever you are in a similar situation, apply the same dua’ and have faith in the response of Al-Mujeeb!

When you feel sad, say: There is no deity except You; exalted are You. Indeed, I have been of the wrongdoers. [Quran, 21:87] The response: So We responded to him and saved him from the distress. And thus do We save the believers. [Quran, 21:88]

When you feel scared say: Sufficient for us is Allah, and [He is] the best Disposer of affairs. [Quran, 3:173] The response: So they returned with favor from Allah and bounty, no harm having touched them. [Quran, 3:174]

When you are ill say: Indeed, adversity has touched me, and you are the Most Merciful of the merciful [Quran, 21:83] The response: So We responded to him and removed what afflicted him of adversity. And We gave him [back] his family and the like thereof with them as mercy from Us and a reminder for the worshippers [of Allah]. [Quran, 21:84]

When you feel hurt by other people say: I entrust my affair to Allah. Indeed, Allah is Seeing of [His] servants (Quran 40:44) The response: So Allah protected him from the evils they plotted, and the people of Pharaoh were enveloped by the worst of punishment. [Quran, 40:45]

5. Do good to strive for your prayers being answered.
Do as many good deeds as you can, check yourself in having a balance of hope as well as fear and be humble and not arrogant in your relationship with Allah and in your dealings with others. Al-Mujeeb says about responding to the request of Zakariyyah: Indeed, they used to hasten to good deeds and supplicate Us in hope and fear, and they were to Us humbly submissive. (Quran 21:89-90)

6. Respond to the servants of Al-Mujeeb.
Be of those who don’t just respond to the plight of those in need but of those who also actively look themselves for those who are in need of support. Have an active attitude in relation to the requests of the environment you live in and of the Ummah as a whole!

O Allah, Al-Mujeeb, we know that You are the answerer and fulfiller of prayers. Guide us to respond to Your call and be responsive to those in need and make us call upon and supplicate to you in the best manner. Don’t let our prayers be unanswered and adorn us with certainty in Your response, ameen!