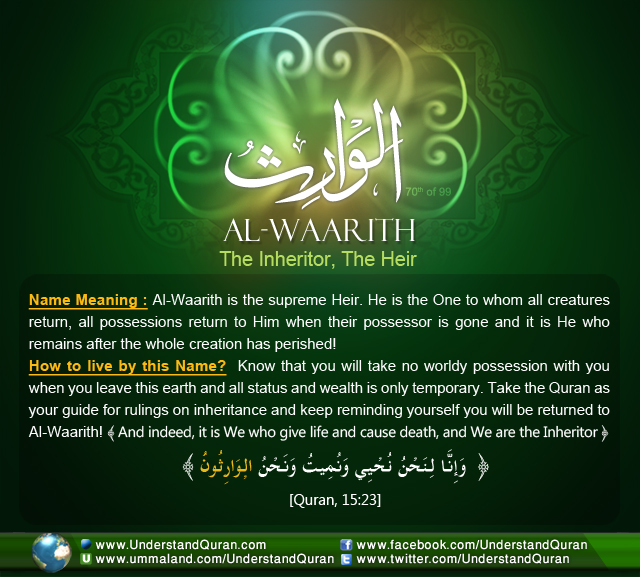 Allah calls Himself Al-Waarith—The Inheritor, the Heir— on one occasion in the Quran. Al-Waarith is the One who remains after the extinction of everyone and everything. He is the only One to whom all will return; He is the sole inheritor and owner of the whole creation!

The Inheritor, The Supreme Heir

Waarith comes from the root waaw-raa-thaa, which points to four main meanings. The first meaning is to inherit. The second main meaning is to be an heir or survivor, and the third is to be the owner or maintainer after one has passed.

This root appears 35 times in the Quran in five derived forms. Examples of these forms are narithu  (“we will inherit”), meeraathu (“(the) heritage”), and al waaritheena (” the inheritors”).

Linguistically, waratha refers to the action of inheriting whereas waarith is the one doing the action, the inheritor and al-meeraath is the inheritage. Even though there is the concept of heirs and inheritance of worldly possessions in this world, Al-Waarith is the supreme Heir to whom the heritage of the heavens and earth belongs.

Inheritance in the Quran

Al-Waarith says: It is not for a believer, man or woman, when Allah and His Messenger have decreed a matter that they should have any opinion in their decision. And whoever disobeys Allah and His Messenger, has indeed strayed into a plain error. [Quran, 33:36]  As believers we find guidance regarding the Islamic rulings on inheritance in detail in the Quran. The law of inheritance has been given in the Quran in Surah An-Nisaa, in ayaat  11 and 12 and then in ayah 176 and it is part of faith to refer to these at all times.

1. Know that you will return to Al-Waarith.
Don’t stick to worldly possessions and don’t let them distract you from obedience to the one to whom both your possessions, yourself and your actions, will return. Don’t look for success in wealth and status, big cars and houses, if it compromises your relationship with Allah ‘azza wa jall— even though society pushes through this concept of “success.” Raise your children in putting Al-Waarith first in their actions and remind yourself often that very soon you will return to Him and you won’t be able to take any of your possessions in this world.

3. Reflect on the ownership of Al-Waarith.
Take a look around you; everything you see– and don’t see— belongs to Allah. He gave you all the possessions you have— your car, your house, your children, your health, and even your time. Al-Waarith says: The kingdom of the heavens and the earth and everything in them belongs to Allah. He has power over all things. [Quran, 5:120] Realize Al-Waarith owns everything, nothing belongs to you, not even your own soul, and praise Him and ask Him for guidance to use your “possessions” to gain His pleasure.  When you lose something or someone console yourself with the fact it was Allah’s to begin with.

4. Follow the rulings on inheritance of the Quran and sunnah.
The rulings and laws regarding inheritance in Islam are laid out in the Quran and demonstrated in the sunnah; refer to them in any situation, whether it brings you worldly benefit or not. Some of us follow their own rules of inheritance to gain more financial benefit, this is a grave sin and disobedience to Al-Waarith. So ask Him to guide you to stick to His rulings at all times!

5.  Ask Al-Waarith.
The Messenger of Allaah salallahu ‘alayhi wa sallam used to say:
اللَّهُمَّمَتِّعْنِيبِسَمْعِي،وَبَصَرِي،وَاجْعَلْهُمَاالْوَارِثَمِنِّي،وَانْصُرْنِيعَلَىمَنْيَظْلِمُنِي،وَخُذْمِنْهُبِثَأْرِي
O Allaah, make my hearing and my sight strong, and make them my heirs (i.e., keep them strong until I die), and support me against the one who has wronged me, and avenge me. [Al-Bukhaari] Use this supplication in your daily life!
In the Quran you can find supplications in which waaritheen (inheritors) is used:
وَاجْعَلْنِيمِنوَرَ‌ثَةِجَنَّةِالنَّعِيم
And place me among the inheritors of the Garden of Pleasure. [Quran, 26:85]
وَزَكَرِ‌يَّاإِذْنَادَىٰرَ‌بَّهُرَ‌بِّلَاتَذَرْ‌نِيفَرْ‌دًاوَأَنتَخَيْرُ‌الْوَارِ‌ثِينَ
And [mention] Zechariah, when he called to his Lord, “My Lord, do not leave me alone [with no heir], while you are the best of inheritors. [Quran, 21:89]

O Allah, Al-Waarith, we know that You are the Inheritor of the heavens and earth. Aid us in using our worldly possessions to gain Your pleasure, guide us in remembering frequently that we will return to You and make us act upon this knowledge. Help us to abide by Your laws and make us of those that will inherit the highest Paradise, ameen!