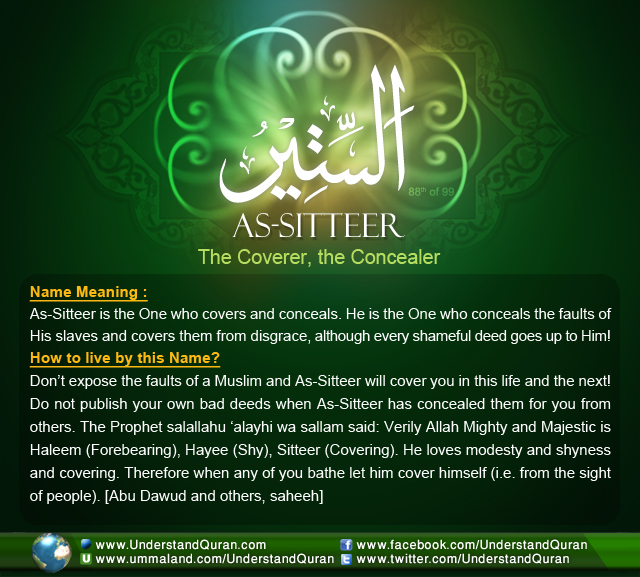 Allah’s name As-Sitteer— The Coverer, the One who conceals— is not mentioned in the Quran, but occurs in a narration of the Prophet salallahu ‘alayhi wa sallam. As-Sitteer is the one who covers and conceals according to His wisdom. He is the One who can conceal the biggest of sins, faults, and shortcomings whenever and for whomever He likes!

The Coverer, the One who Conceals

This root appears three times in the Quran in three derived forms.  Examples of these forms are tastatiroona (“covering yourselves”), sitran (“any shelter”), and mastooran (“hidden”).

Linguistically, sitr refers to the concept of concealing something. Sitteer is the emphasised form of the root, which points out to an intense quality and quantity of the root concept. It indicates extreme concealment. As-Sitteer is the only one who can conceal a great deal for His slaves and covers them from disgrace and shields them from Hellfire.

The Prophet salallahu ‘alayhi wa sallam said: Verily Allah Mighty and Majestic is Haleem (Forebearing), Hayee (Shy), Sitteer (Covering). He loves modesty and shyness and covering. Therefore when any of you bathe let him cover himself (i.e. from the sight of people). [Abu Dawud, An-Nasaa’ee, al-Baihaqi, Ahmed, graded as saheeh]

The forbearance and covering of Allah

Allah’s name As-Sitteer is related in meaning to Al-Haleem, the Forebearing. Imagine a humanity sinning openly against Him while highly dependent on Him, who would not even be able to move one limb in disobedience to their Lord if He did not give them the ability.

Then see how Allah ‘azza wa jall, who is completelty independent from the whole creation, is forebearing and covers His slaves out of His generosity and reluctance to disgrace them. He overlooks, covers, and conceals time and time again even though acts of disobedience rise up to Him continuously.

Yet He calls mankind to a beautiful and simple act; the repentance of the slave is between that slave and Allah ‘azza wa jall and Him only, and is concealed from the people.

1. Keep your sins to yourself.
How many people actually boast about their bad deeds, the bad places they visited, and the bad people whose company they shared? The Messenger of Allah salallahu ‘alayhi wa sallam said: My entire nation is safe, except al-mujahirin (those who boast of their sins). Among the mujaharah is that a man commits an (evil) act, and wakes up in the morning while Allah has kept his (sin) a secret, he says: O so-and-so! Last night I did this and that. He goes to sleep while Allah has kept his (sin) a secret but he wakes up in the morning and uncovers what Allah has kept a secret! [Al-Bukhari] So keep your sins a secret and repent to As-Sitteer.

Be inspired by this advice of Umar ibn Al-Khattaab radiyallahu ‘anhu: Abdullah Ibn Masoud radiyallahu ‘anhu related that a man came to the Prophet and said: O Messenger of Allah! I have mingled with a woman in the far side of al-Medina, and I fulfilled my desire short of actually having sexual intercourse with her. So, here am I, judge me according to what you decide. Umar ibn al-Khattaab then said: Allah had kept your secret, why did not you keep your secret? [Muslim]

And Allah says: Verily those who like that (the crime) of illegal sexual intercourse should be propagated among those who believe, they will have a painful torment in this world and in the Hereafter. [Quran, 24:19]

2. Don’t expose others’ faults.
Apart from covering your own sins, you should also keep away from exposing the sins of others when they did not commit their sins openly. How many people are eager to seek out and expose the sins and bad deeds of others, sometimes just to make themselves look better? A beautiful formula from the sunnah is: cover the faults of a Muslim and Allah ‘azza wa jall will cover you in this life and the next!

3. Call on As-Sitteer.
There’s a beautiful supplication from the sunnah in which the verb of satara is used. Part of the morning and evening adhkaar (remembrance) is that the Prophet salallahu ‘alayhi wa sallam used to supplicate:

Memorize this comprehensive dua’, make it part of your daily routine, and get immensely rewarded for invoking As-Sitteer and reviving a sunnah of the Prophet salallahu ’alayhi wa sallam!

O Allah, As-Sitteer, we know that You conceal and cover us continuously. Aid us in keeping our misdeeds secret and cover us from disgrace in this world and the next. Make us of those who do not expose nor seek out the faults of others and shield us against the Fire so we can enter Your paradise safely, ameen!