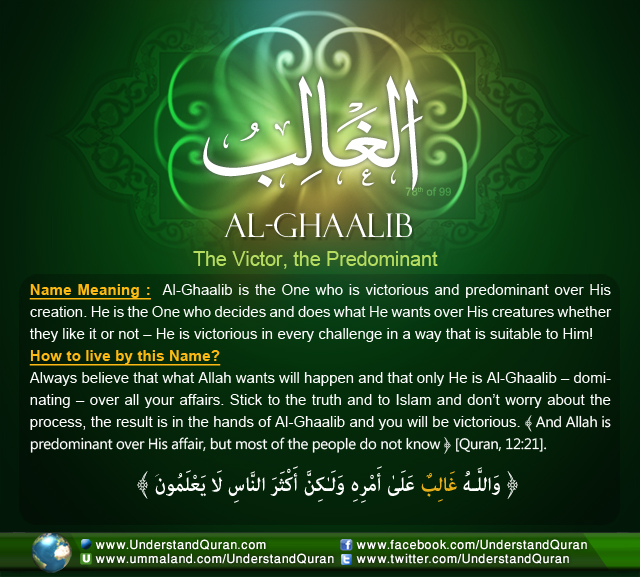 Allah calls Himself Al-Ghaalib— The Victor, the Predominant— on one occasion in the Quran. Al-Ghaalib is the One who is victorious in every situation. He is the only One who decides and does as He wants with the creation and makes the believers prevail.

The Victor, the Predominant, the One Who Prevails

This root appears 31 times in the Quran in five derived forms. Examples of these forms are yaghliboo (“the will overcome”), ghaaliboona (“victorious”), and maghloobun (“one overpowered”).

Linguistically ghaalib refers to the one possessing the attribute of victory and dominance, whereas ghalaba refers to the verb “to overcome.” From the same root comes the word ghulb in the Quran, Allah says: wa hadaa’iqa ghulba– and gardens of dense shrubbery [Quran, 80:30], which points to a thick foliage of plants to be found in the earth and “overcoming” the soil it is growing in.
Al-Ghaalib is the ultimate one to prevail, control, dominate, and overcome each being and situation with great ease and utmost wisdom— and whenever He pleases.

Al-Ghaalib Himself says: And the one from Egypt who bought him said to his wife, “Make his residence comfortable. Perhaps he will benefit us, or we will adopt him as a son.” And thus, We established Joseph in the land that We might teach him the interpretation of events. And Allah is predominant over His affair, but most of the people do not know. [Quran, 12:21]

Allah ‘azza wa jall calls Himself Al-Ghaalib in Surah Yuusuf. In the story of the prophet Yuusuf ‘alayhi sallam everything is intended one way and it goes the other way, a beautiful example of how everything is in the control of Al-Ghaalib.

Yuusuf’s brothers want to get him out of the way so they can get the love of their father. They left him to die in the well, but he survived. Allah says in this surah: Wallahu ghaalibun ‘alaa amrih (And Allah is predominant over His affairs). What He wills will happen, even though everything indicates another way.

Then Al-Azeez, the wealthy ruler, buys Yuusuf and brings him into His palace, and Al-Azeez’s wife, a powerful, beautiful woman, does everything she can to seduce this young, single man who is her slave. Every single aspect is tempting for zinaa– immorality– but Yuusuf doesn’t sway.

He ends up descending from a palace into the darkest prison and from the prison back to a ruling position in Egypt where he is reunited with his beloved father, Yaqoob ‘alayhi sallam. All the events of this story are a clear sign that the final decision is to Al-Ghaalib, “against all odds.” And every human being is like Yuusuf ‘alayhi sallam in that in his affairs Allah is Al-Ghaalib!

1. Have strong belief.
Never fear people and their decisions, never be deceived by the looks of a situation nor be scared of losing your possessions – know that Allah is Al-Ghaalib in Your affairs and He will decide what happens. Next time you feel tempted to care more about the acceptance of people or gaining belongings than trying to please Al-Ghaalib, remind yourself and live by this ayah:  If Allah should aid you, no one can overcome (ghaaliba) you; but if He should forsake you, who is there that can aid you after Him? And upon Allah let the believers rely [Quran, 3:160]

2. Hold onto the truth.
Allah has written, I will surely overcome (la’aghlibanna), I and My messengers. Indeed, Allah is Powerful and Exalted in Might [Quran, 58:21] Know that if you stick to the truth and to your Islamic principals you will win; no matter how weak the believers might get, the truth will prevail. This is because Allah is Al-Ghaalib; the victory of those who follow Him and the messengers is His promise and when Allah promises, He delivers.  Allah says: But those who were certain that they would meet Allah said, How many a small company has overcome (ghalabat) a large company by permission of Allah. And Allah is with the patient [Quran, 2:249] So hold on to the truth, no mater how weak it seems, have strong belief Allah is Al-Ghaalib, have patience and victory will be yours, whether in this life or the next!  And whoever is an ally of Allah and His Messenger and those who have believed – indeed, the party of Allah they will be the predominant (al-ghaaliboona). [Quran, 5:56]

3. Take lessons from the past.
And Pharaoh and his people were overcome (faghuliboo) right there and became debased. [Quran, 7:119] While you read the ayaat in the Quran of the former people and their fates, Allah observes if and how you apply these lessons in your daily life. Do you try to avoid the sins they committed? Look at the characteristics of the people who were defeated because of their transgression, disbelief and arrogance and strive to be better than them in shaa Allah.

4. Don’t let sins overcome you.
In the Hereafter there will be a heart-shaking scene: the people of the Hellfire will beg Allah to release them from the Fire. They will say, “Our Lord, our wretchedness overcame (ghalabat) us, and we were a people astray. [Quran, 23:106] However He (Allah) will say: Remain you in it with ignominy! And speak you not to Me!”  Verily, there was a party of My servants who used to say: “Our Lord! We believe, so forgive us and have mercy on us, for You are the Best of all who show mercy! But you took them for a laughing stock, so much so that they made you forget My remembrance while you used to laugh at them!) Verily, I have rewarded them this Day for their patience; they are indeed the ones that are successful. [Quran 23: 108-111] Let this scene inspire you to not be overcome by sins in this life and end up like the people begging Allah for one more chance. Instead believe in this life and continuously ask Al-Ghaalib for forgiveness and mercy, as you will not get a second chance to return to this world!

5. Don’t think you can prevail by yourself.
Never attribute any victory or success to yourself, nor dominate others in an unjust way. And [remember] when Satan made their deeds pleasing to them and said, No one can overcome (ghaaliba) you today from among the people, and indeed, I am your protector. [Quran, 8:48] Some people think they can prevail by themselves or they attach their mind or trust to another human being or even object, but eventually they will be defeated.

6. Don’t be deceived.
But, [on the contrary], We have provided good things for these [disbelievers] and their fathers until life was prolonged for them. Then do they not see that We set upon the land, reducing it from its borders? So it is they who will overcome? [Quran, 21:44] Sometimes the wealth, success, beauty and even intelligence of those who disbelieve can be confusing and even tempting. Know that Al-Ghaalib only prolongs the lives of some people for them to increase in their transgression. Say to those who disbelieve, You will be overcome and gathered together to Hell, and wretched is the resting place. [Quran, 3:12]

7. Call upon Al-Ghaalib.
When all people turn against Him after years of calling to Allah, what does Nuh ‘alayhi sallam do? He doesn’t ask others for help, he doesn’t give up, but he turns to Al-Ghaalib and beautifully supplicates:

O Allah, Al-Ghaalib, we know that You are the One who is predominant in all affairs. Make us of those who have strong belief, hold onto the truth at all times and learn from the lessons You provided us in Your book. Don’t let us be overcome by sin, and make us of those who are victorious in both this life and the Hereafter, ameen!