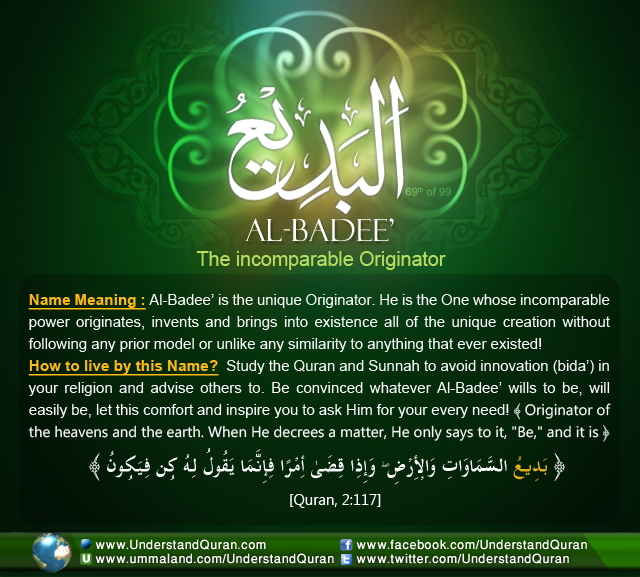 Allah calls Himself Al-Badee’— The incomparable Originator— on two occasions in the Quran. He is the One who initiates and creates in amazing and original ways that have no precedent, without any model or example. Al-Badee’ is the incomparable, the unique, and only One who originates, commences, invents, and creates in a perfect way!

The incomparable originator, the wonderful inventor and innovator

This root appears four times in the Quran in three derived forms. Examples of these forms are ibtada’oohaa (“they innovated”) and bid’an (“a new (one)”).

Linguistically, bid’ah means an innovation or something new, something not done or said by anyone before.

Al-Badee’ refers to the one and only Originator who time and time again does something new, unlike anything else, originating its existence without the use of any tool and without being limited to time or space.

Bida’h: the concept of innovation in religion

According to Islamic teaching bid’ah is any invented or innovated way in religion that is aimed at worshipping or drawing closer to Allah ‘azza wa jall. This means that this act, saying, or distancing from something, has no proof—or daleel— in the Quran and Sunnah and was not known at the time of the Prophet salallahu ‘alayhi wa sallam and the companions. (These unaccepted religious inventions and innovations don’t include worldly inventions, like technology.)

The Prophet salallahu ‘alayhi wa sallam would start a khutbah (sermon) saying: …The best of speech is the Book of Allah and the best of guidance is the guidance of Muhammad. The worst of things are those which are newly-invented, and every innovation is a going astray . . .  [Muslim] This shows us it is forbidden to innovate something in Islam or to follow an innovation someone else started.

He salallahu ‘alayhi wa sallam kept repeating:  Every newly-invented thing is a bid’ah (innovation), every bid’ah is a going astray, and every going astray will be in the Fire. [An-Nasaa’i]  He also explained that when you invent something in Islam this deed will be rejected from you: Whoever innovates something in this matter of ours that is not a part of it will have it rejected. [Al-Bukhaaree]

This shows how important it is to gain correct Islamic knowledge, as any innovation will not be accepted from the believers and can lead to the Hellfire.  Examples of bid’ah are denying any of the five pillars of Islam or of the six pillars of emaan (faith), celebrating non-Islamic events and declaring that which is haraam (forbidden) halaal (accepted) and that which is halaal, haraam.

And: . . . we were with ‘Umar and he said: We have been forbidden to undertake a difficult task beyond our capability (i.e. to exceed the religious limits, e.g., to clean the inside of the eyes while doing ablution).[Al-Bukhaaree] Never change or twist the meaning of the Quran or Sunnah to suit your desires. Be honest and take responsibility for your choices. Be careful with cultural activities; if they don’t contradict the Quran and sunnah there is no harm, but if they contradict Islam, avoid them.

5. Present Islam in a correct way.
When presenting Islam to someone, present the Quran and Sunnah and not your opinion.

6. Ask Al-Badee’.
. . . Originator of the heavens and the earth. When He decrees a matter, He only says to it, ‘Be,’ and it is. [Quran, 2:117] Know there is no problem too big, no situation too challenging, and no difficulty too hard as long as you call upon Al-Badee’ to ask for His support and for your every need.

O Allah, Al-Badee’,we know that You are the incomparable Originator. Make us of those who follow Your rope, gain correct knowledge of Your Book and the sunnah and protect us from bid’ah. Guide us in reviving the ways of Your prophet correctly, make us convey the message of Islam to others as You revealed it and adorn us with complete faith and trust in Your power to create and originate, ameen!