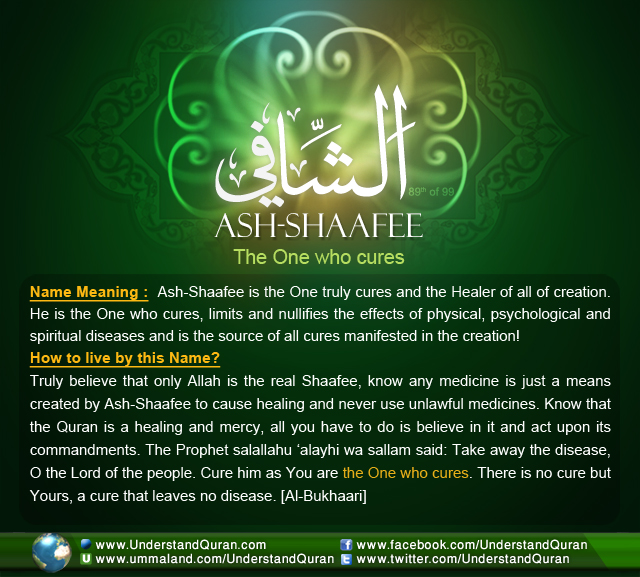 Allah’s name Ash-Shaafee— The One who cures, the Healer— is not mentioned in the Quran, but occurs in a narration of the Prophet salallahu ‘alayhi wa sallam. Ash-Shaafee is the only one who can cure and heal any disease or ailment. His healing is perfect according to His wisdom and He is the source from which all cures come!

The One Who Cures, the Healer

Shaafee comes from the root sheen-faa-yaa which points to two main meanings. The first main meaning is to cure and heal and the second to satisfy.

This root appears six times in the Quran in two derived forms.  Examples of these forms are wa yashfi (“and will heal”) and shifaa’un (“a healing”).

Linguistically, shifaa is used to indicate the cure or healing of a disease or ailment. For example different goods or practises, such as honey, black seed and cupping therapy, as well as the Quran itself are described to be or contain shifaa. Only Allah is Ash-Shaafee, the Ultimate Healer and the Source of all cures!

The Prophet salallahu ‘alayhi wa sallam said: Take away the disease, O the Lord of the people. Cure him as You are the One who cures. There is no cure but Yours, a cure that leaves no disease. [Al-Bukhaari]
Medical treatment and reliance on Allah

The Prophet salallahu ‘alayhi wa sallam said: Allah has sent down the disease and the cure, and has made for every disease the cure. So treat sickness, but do not use anything haram. [Abu Dawood]  Also a Bedouin said:  O Messenger of Allaah, should we not treat sickness? He said: Treat sickness, for Allah has not created any disease except He has also created the cure, except for one disease.  They said, O Messenger of Allah, what is it? He said: Old age. [At-Tirmidhee]

Along with strong reliance on Allah that He will bring you benefit in both worlds and will protect you, it is essential to take the appropriate means which Allah ‘azza wa jall has set in order for us to achieve results. Not using these means and tools is contrary to the concept of tawakkul. [paraphrased from Zaad al-Ma’aad, 4/15, Ibn ul Qayyim]

1. Believe Allah is the only Healer.
Realize that Allah is the One who heals whomsoever He wills and He decrees sickness and death for whomsoever He wills. He says: And if Allah touches you with harm, none can remove it but He, and if He touches you with good, then He is Able to do all things [Quran, 6:17] The Prophet Ibraheem ‘alayhi sallam used this beautiful fact as a powerful tool of da’wah: And when I am ill, it is He who cures me. [Quran, 26:80]
It is part of your belief to know and live by the fact Allah is the only One who can heal every disease of your body, mind and heart,  by whichever means He deems suitable. So trust in Him first and foremost,  and then make use of the lawful treatments He made available for you through medical and other sciences. However, never attribute healing to medicines or other means and always to Ash-Shaafee only. Don’t forget to say say bismillah when you take any medicine

2. Live by the Quran.
Included in the guidance for mankind to define the path to eternal success, the Quran is a cure and healing for all types of diseases and problems. Ash-Shafee clearly told us that the words of the Quran are a shifaa (healing);however it is upon you to believe in them and live by them. Allah says: And We send down of the Quran that which is a healing and a mercy to those who believe… [Quran, 17:82]

3. Apply the cures of the Quran & sunnah.
One example of treatment from the Quran and sunnah is ruqyah which refers to the recitation of Quran, seeking of refuge, remembrance and supplications that are used as a means of treating sicknesses and other problems. Ruqyah is of two types: ruqyah ash shar’eeya (permissible) and ruqyah ash shirkiyah (impermissible). Ruqyah ash shar’eeya – treatment as prescribed in the Quran and sunnah- must be with the speech of Allah (Quran) and His names and attributes, it must be in the Arabic language, or what is known to be its meaning in other languages and you must believe that ruqyah has no benefit by itself, but the benefits are from Allah.

Scholars have stated that ruqyah is one of the greatest remedies that the believer should use regularly. The greatest of ruqyah are surah Al-Faatihah, surah Al-Falaq and surah An-Naas, which can be used as general physical healing, cure and protection for the evil eye and sehr (magic) as well as psychological and spiritual diseases.*

‘Aisha (may Allah be pleased with her) said: In his last illness, the Prophet (peace be upon him) used to blow breath (into his cupped hands) and recite Al-Mu‘awwidhatayn (Surahs Al-Falaq and An-Naas) and then wipe over his body. But when his illness aggravated, I used to recite them over him and pass his own hand over his body for its blessing. [Al-Bukhaari, Muslim]

4. Visit the sick.
Visiting the sick (‘iyaadah in Arabic) is a communal obligation as mentioned in Majmoo‘ Fataawa wa Rasaa’il Ibn ‘Uthaymeen. However, the rewards for doing so are enormous. The Prophet said: There is no Muslim who visits a (sick) Muslim early in the morning but seventy thousand angels send blessings upon him until evening comes, and if he visits him in the evening, seventy thousand angels send blessings upon him until morning comes, and he will have a garden in Paradise. [At-Tirmidhee, saheeh]
The beauty in Islam is that we should not only visit the sick we know, but also those we don’t know, as we are doing it for the sake of Allah and His reward. Form a group in your community of those  who visit the sick, and teach children the reward. Revive the sunnah by saying these supplications:
1. لا بأْسَ طَهـورٌ إِنْ شـاءَ الله –  La ba’s, tuhoor in sha Allaah (No worry, it is a purification, if Allah wills). [Al-Bukhaaree]
2. Ask for the person to be healed three times: The Prophet visited Sa’d ibn Abi Waqqaas and said: ‘O Allah, heal Sa’d,’ three times. [Al-Bukhaaree, Muslim]
3. Place your right hand on the sick person and say, as the Prophet did:

A classic work is: Healing with the medicine of the Prophet by Ibn Qayyim al Jawziya.
O Allah, Ash-Shaafee, we know that You are the only Curer and Healer. Adorn us with strong belief in You as source of all cures, bless us with tawakkul and lead us to whatever means and treatments are best for us in times of illnesses. Guide us in benefiting optimally from the Quran as healing and bless us with knowledge and application of the treatments You prescribed. Make us of those who visit the sick and gain Your enormous rewards, ameen!