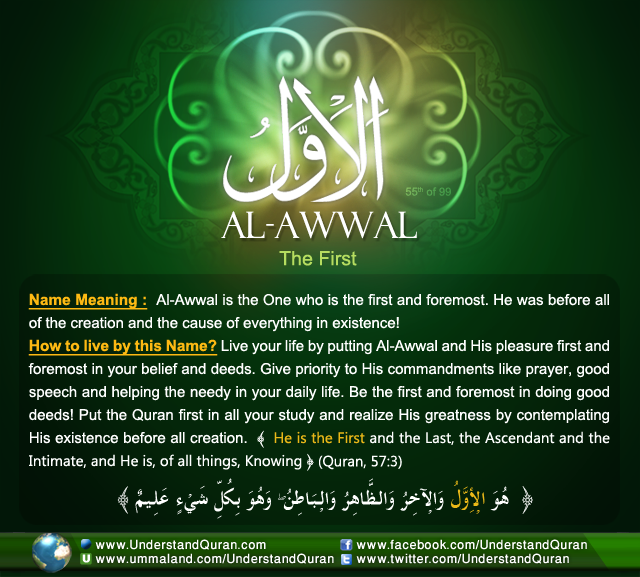 Allah calls Himself Al-Awwal— The First— once in the Quran. Al-Awwal is the one who neither has a beginning nor an end. There is none prior to Him; He is self-existent, all comes from Him, and He is the cause of all that became!

The First One, The Foremost, The Pre-existing

This root appears 170 times in the Quran in four derived forms. Examples of these forms are al-oolaa (“the first”), yaa ulee (“Oh men”), aali (“family, people”), al-awaleena (“the forefathers”) and taweelih (“interpretation”).

Linguistically al-awwal means the one who advances or precedes others. The firstness of Allah Al-Awwal means: the One Whose existence has no beginning [Al-Bayhaqi] and Who existed before everything without a limit (of beginning) [Ibn Jareer At-Tabari]. Al-Awwal  deserves to be the first since He existed when there was nothing before or with Him! [Al-Khattaabi]
This all refers to the same meaning, as the Prophet salallahu ‘alayhi wa sallam said:  O Allah! You are the First, and there is nothing before You… [Muslim]

Al-Awwal Himself says: . . . He is the First and the Last, the Ascendant and the Intimate, and He is, of all things, Knowing [Quran 57:3]

The First of Creation

Al-Awwal says: And He it is Who has created the heavens and the earth in six Days and His Throne was on the water, that He might try you, which of you is the best in deeds [Quran, 12:7]. Qataadah said: Your Lord, may He be blessed and exalted, is telling you how His creation began before He created the heavens and the earth [Tafseer al-Tabari, 15/246]

The Prophet salallahu ‘alayhi wa sallam said: There was Allah, and there was nothing else besides Him, and His Throne was over the water. He wrote all things in the Book (in heaven) and He created the heavens and the earth [Al-Bukharee] Both the ayah and the hadeeth state that the ‘Arsh (the Throne) of Allah ‘azza wajal was over the water before the heaven and earth were created.

We know Allah is the first, but do you really make him ‘awwal’ in your daily life? The Prophet salallahu ‘alayhi wa sallam said: Whoever makes the Hereafter his preoccupation, then Allah places freedom from want in his heart, gathers his affairs, and the dunya (worldly life) comes to him despite being reluctant to do so. And whoever makes the dunya his preoccupation, then Allah places his poverty in front of his eyes, make his affairs scattered, and nothing of the dunya comes to him except that which has been decreed for him [At-Tirmidhee]

Do you only think about the clothes you will wear, the food you will eat, the shopping you will do and the friends you will meet that day? Or about how you will pray your prayers on time,  keep yourself from back biting and how you will read your daily portion of the Quran? Fulfilling His commandments and staying away from what He forbade should be the biggest concern of your day!

3.   Give priority to your prayer.

The Prophet salallahu ‘alayhi wa sallam said: The first thing one will be held accountable for on the Day of Judgment is prayer [Sunan Abu Dawud, an-Nasaa’i, Al Hakim] Contemplate this important fact and let it motivate you to fit your daily activities around your prayer instead of fitting your prayers around your daily activities! Learn how to pray properly, understand what you say in salah, push yourself to pray on time and ask Al-Awwal to help you put your prayers first!

4.   Please Him first and He will beautify you.

The Prophet salallahu ‘alayhi wa sallam said: He who displeased Allah for seeking the pleasure of people, Allah is displeased with him and those people are also displeased..And he who pleases Allah, although by it he displeased people, Allah is pleased with him… Allah makes him splendid and his speech and acts in the eyes of others beautiful [Tibrani] You will never be able to please one person all the time. Focus on pleasing Allah ‘azza wajal first in everything you do and He will give you a beautiful position in people’s eyes insha’Allah!

5. Put the Quran first in your studies.

Ibn Taymiyyah raheemahullah said: As for seeking to memorize the Quran then this is to be given preference over many of the things that the people consider to be knowledge, but are -in reality – either totally useless, or having little benefit. It is also to be given precedence in learning especially by those who wish to acquire knowledge of the deen, its principles and its particulars. Since what is prescribed for such a person at this time is that he should begin by memorizing the Quran, as it is the foundation of the branches of knowledge of the deen [Fataawa al-kubra 2/54-55] Make understanding, reciting and interacting with the Quran should be the basis and priority of all your studies, even if it is ten minutes a day!

O Allah, Al-Awwal we know that You are the One without beginning nor end.  Guide us to put You and seeking Your pleasure first and foremost in our belief and our deeds. Help us to give priority to our prayers, adorn us with love and closeness to Your Book and make us of the saabiqoon, ameen!