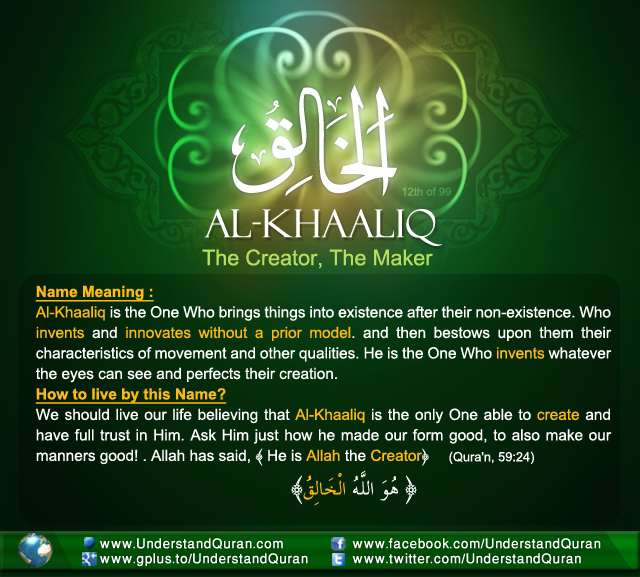 Allah calls Himself Al-Khaaliq— The Creator, or the Maker— on 11 occasions in the Quran. He is the One who creates everything from nothing. Al-Khaaliq invents and perfects according to His will and with the knowledge of what will happen!

The Creator, the Maker, the Planner

Khaaliq or Khallaaq (intensification) comes from the root khaa-laam-qaaf which points to three main meanings. The first main meaning is to measure accurately or to proportion one thing according to another and the second is to create something based on a devised model or pattern. The third main meaning is to bring a thing into existence from non-existence and after making it exist, to change it to something else.

This root appears 261 times in the Quran in eight derived forms. Examples of these forms are khalaqakum (“created you”), khuluqin (“of moral character”), and ikhtilaaqun (“a fabrication”).

Linguistically, khalq refers to creating, making, and giving measurement. Al-Khaaliq is the One who created the material and time present in the universe, gave matter to its properties and set in motion its laws. He has total control over everything and manages all its affairs but is independent of all that He created. Allah alone is the creator and all the rest is creation.

The product of Allah

Allah ‘azza wajal mentions in the Quran that He is ahsaanul khaaliqeen, the best of creators. This is meant metaphorically— there are no other creators. When we look at tawheed— our belief in the oneness of Allah— we see two aspects: the unity of Allah and the unity of the creation. They are not mixed in any way, the creation is the product of Allah Al-Khaaliq.
For example a chair: the cotton fabric comes from plants, the metal from rocks, and the wood from trees; all that people did is reassemble these sources into a piece of furniture. Human beings manipulate or reassemble that which already exists— we cannot and will never create anything.

Most ayaat of the Quran are a reminder for those who believe in Allah ‘azza wa jall, reminding them of Him as Creator and how to praise and be thankful to Him. In a few ayaat Al-Khaaliq powerfully presents the truth to atheists: Or were they created by nothing, or were they the creators [of themselves]? Or did they create the heavens and the earth? Rather, they are not certain. [Quran, 52:35-36]

The argument starts with Allah ‘azza wa jall giving the atheists a first option: if they don’t believe in a creator then were they created from nothing? Nothing cannot produce something, that’s the first option cancelled.

Allah gives them a second option: then, did you create yourselves? If you didn’t exist then you can’t do any creating. Allah ‘azza wa jall continues: did you create the heavens and the earth? Even if they claim to have created themselves, did they create the vast heavens and earth? Indeed, they are uncertain; somebody had to create them. Al-Khaaliq leaves mankind with these two options to think about. That is the logic of belief in Allah ‘azza wa jall, and the believers should be able to convey these ayaat or verses.

1. Strengthen your relationship with al-Khaaliq.
If there is anything you desire, ask the One who creates everything; if you desire children ask Al-Khaaliq, but also turn to Him for the smallest matters. The Messenger of Allah salallahu ‘alayhi wa sallam said: Each of you should ask for his needs from Allah, even if the strap of your sandal breaks, because if Allah does not facilitate it, it will never be possible. [At-Tirmidhee] No evil eye, magic, or any force on earth can prevent what Al-Khaaliq has destined to come into existence. Firawn tried his best to prevent Musa ‘alayhi sallam from coming into being and growing up to destroy his kingdom, but when Al-Khaaliq decides to create something it will be! So ask Him for all your needs and wishes.

2. Don’t fear created things.
Don’t fear the creation, only fear the Creator. Stop fearing people’s opinions, poverty, failure, etc., and focus on pleasing Al-Khaaliq. He will suffice for your needs. Our problem is that we often try to please people while angering Allah ‘azza wa jall, like joining in backbiting to be “cool.” The Prophet salallahu ‘alayhi wa sallam said: Whoever sought the pleasure of Allah though it was displeasing to the people then Allah becomes pleased with him, and will make the people pleased with him, and whoever sought the pleasure of the people though it was displeasing to Allah then Allah becomes displeased with him and will make the people displeased with him. [Ibn Hibban, At-Tirmidhee]

3. Don’t call people “creator.”
In the English language “to create,” is also used in the senses of forming, producing, or making. However, referring to “creating” we must not use it for people in the sense of making something existent from nothing, calling people “creator.”

4. Look at nature.
Allah al-Khaaliq says: You do not see in the creation of the Most Merciful any inconsistency. So return [your] vision [to the sky] -don’t be content with just one look, look more times and see- are there any breaks [Quran, 67:3] And the earth – We spread it out and cast therein firmly set mountains and made grow therein [something] of every beautiful kind, Giving insight and a reminder for every servant who turns [to Allah]. [Quran 50: 7-8] Form a new habit: take at least five minutes each day to sit down, day or night, and actively look around you, remember Al-Khaaliq, and stand before Him.

O Allah, Al-Khaaliq, we know that You are the Creator of all that existed, exists, and will exist. Lead us to unshakable belief in you as our Creator and let us never ascribe partners to You. Guide us to please You and to ask You for our needs and wishes, awaken us to reflect on the creation, and make us of those who are good in form and good in manners, ameen!