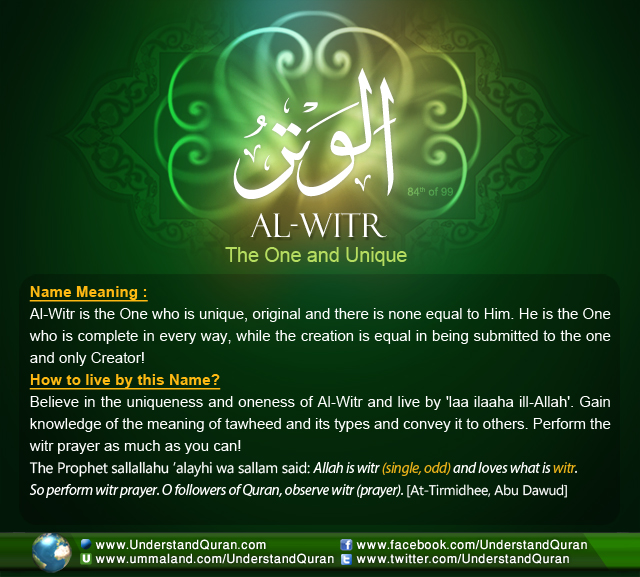 Allah’s name Al-Witr— The One and Unique—is not mentioned in the Quran, but occurs in a narration of the Prophet salallahu ‘alayhi wa sallam. Al-Witr is the One, the Unique and Only. He is unique in His essence in all His attributes and there is nothing equal to Him in any way!

The One, Odd-numbered, and Unique

Witr comes from the root waw-taa-raa, which points to three meanings. The first meaning is to be odd (numbered), one and single.  and the second is to be in succession. A third meaning is to deprive.

This root appears three times in the Quran in three derived forms. Examples of these forms are yatirakum (“will deprive you”), tatraa (“in succession”) and wal-watri (“and the odd”).

Linguistically witr means that which is odd-numbered,  unever, not uniform or equable. Allah’s name Al-Witr is related in meaning to His beautiful names Al-Ahad and Al-Waahid.  All indicate that Allah ‘azza wa jall is one, only and unique in His essence, all His powers, knowledge and abilities.

Examples of Witr in Worship

In Islam the ways we worship are indicated to the finest details in the Quran and the sunnah of the Prophet Muhammad salallahu ‘alayhi wa sallam. An example is the number of times we are ought to carry out certain acts of worship, of which some are in witr (odd numbers) only.

Examples  are the tawaaf (circulation) around the ka’bah, which is prescribed to be done seven times as well as the times Muslims go between Safaa and Marwaa as Hajj and Umrah ritual.

According to some ahadeeth the Night of Decree (laylatul qadr) is to be found in the last ten nights of Ramadhan, in the odd-numbered nights.

Another example is the amount of days which is sunnah to fast as one of the ways of the Prophet to fast was on ayaam ul beed – the white days – which are three days in the middle of each month.

The most known example regarding witr is the Witr prayer, which is a strongly recommended prayer of an odd-numbered rakaat to be prayed in the time after the ‘Esha prayer and before the Fajr prayer.

1. Keep reminding yourself of the uniqueness of Al-Witr.
The fact Allah ‘azza wa jall is one and unique in all He does, knows and gives is something we know, but sometimes forget to live by in our daily lives. Remind yourself each day Allah is the only one who can give you Paradise, so put Him first and not what people think or want of you or even what your ego (nafs) whispers to you!

2. Pray the Witr prayer. The Witr prayer is one of the greatest acts of worship that draw one closer to Allah. The majority of the scholars say is one of the confirmed sunan (a sunnah mu’akkadah) which you as a Muslim should observe regularly and not neglect. Imam Ahmad raheemahullah even said: Whoever neglects Witr is a bad man whose testimony should not be accepted. The Prophet said: Allah has prescribed for you a prayer (by which He may increase your reward), which is Witr; Allah has enjoined it for you during the time between ‘Esha prayer until dawn begins. [At-Tirmidhee, saheeh] Ask Allah Al-Witr to enable you to pray this prayer regularly.

3. Be unique.
As true Muslims we all share our belief in Allah Al-Witr alone, but this doesn’t mean we should not strive to be unique in our actions! Do your best to perform as many good deeds as you can, be creative and set up your own projects on the path of Islam and for the pleasure of Al-Witr and by the will of Allah, leave an unique legacy in this world which will count for you in the Herefter inshaa’Allah.

4. Know the meaning of tawheed and live by it.
Studying the meaning of tawheedullaah (the Oneness of Allah), its types and how to live by them is the most important branch of Islamic knowledge. Part of this knowledge are knowing the names and attributes of Allah ‘azza wa jall. At least spend one day a week of which you read from a trustworthy book about tawheed and its types and make sure to convey this knowledge to your children and family inshaa’Allah!

O Allah, Al-Witr, we know that you are one, single and unique. Help us to remind ourselves of Your oneness and turn to You only for all our needs and make us of those who consistently pray the Witr prayer. Increase our knowledge of tawheed and its types, aid us to live by them, and enable us to leave a unique legacy of ongoing good deeds for those who come after us until the day of judgement, ameen!

To read about the Name of Allah Al-Ahad, click here.

To read about the Name of Allah Al-Waahid, click here.