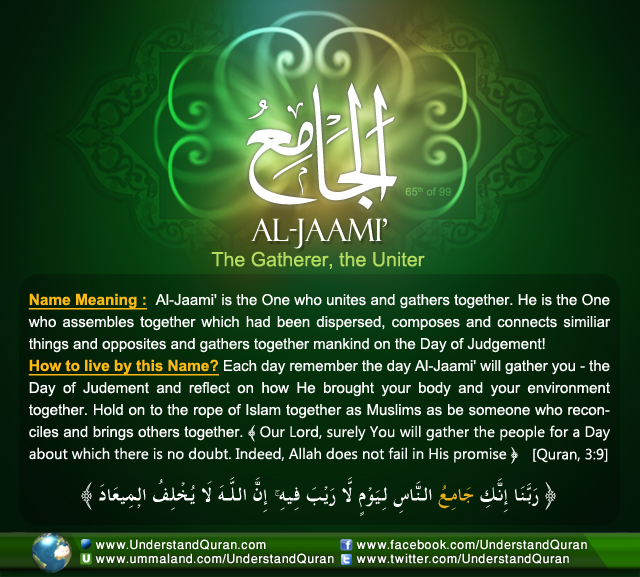 Allah calls Himself Jaami’—Gatherer, Collector, One

Who Unites— on two occasions in the Quran. He is the One who gathers, reconciles, assembles, and unites. Al-Jaami’ is the One who brought the whole universe together, who reconciles hearts, who connects opposites and that which is similar, and who will gather all to stand before Him!

The One Who Gathers and Collects, the Uniter

This root appears 129 times in the Quran in 11 derived forms. Examples of these forms are yajma’oona (they accumulate), ajma’eena or jamee’an (all together), al-jam’aani (the two forces, the two hosts) and jama’oo (gathered).

Linguistically, the concept of jam refers to both physical gathering and union, such as yawm ul-jumu’ah ( the day people gather) and ‘ijmaa (scholarly consensus) as spiritual reconciliation, such as bringing the hearts people together after enmity.

Al-Jaami’ is the One who makes substances in the bodies work together, who gathers all different creatures living side by side in the world and so will disassemble us and compose us again when He gathers us on the Day of Judgment!

Al-Jaami’ Himself says: Our Lord, surely You will gather the people for a Day about which there is no doubt. Indeed, Allah does not fail in His promise [Quran, 3:9]  . . . Indeed, you would then be like them. Indeed Allah will gather the hypocrites and disbelievers in Hell all together. [Quran, 4:140]

The Day of Gathering

Friday, or the day of Al-Jumu’ah, is a blessing Allah ‘azza wa jall granted the believers. The Prophet salallahu ‘alayhi wa sallam said: Allah sent astray those who had come before us from Al-Jumu’ah (The Day of Gathering/Friday).  So the Jews were guided to yawmus-Sabt (Saturday), and the Christians were guided to yawmul-Ahad (Sunday).  So Allah presented to us, therefore guided us to Al-Jumu’ah.  Furthermore, they will follow us on yawmul-Qiyaamah (The Day of Standing and Reckoning).  We are last from amongst Ahlud-Dunyaa -the people of this life- and first on yawmul-Qiyaamah  [Muslim]

The Day of Resurrection is also known as the Day of Gathering, because on that Day Allah will gather His slaves for their final Judgments; this is the great gathering. Allah ‘azza wa jall tells us about Yawm ul-Jam’i (the Day of Assembly): The Day He will assemble you for the Day of Assembly – that is the Day of Deprivation. And whoever believes in Allah and does righteousness – He will remove from him his misdeeds and admit him to gardens beneath which rivers flow, wherein they will abide forever. That is the great attainment. [Quran, 64:9]

1. Remember the Day of Gathering.

Allah– there is no deity except Him. He will surely assemble you for [account on] the Day of Resurrection, about which there is no doubt. And who is more truthful than Allah in statement. [Quran, 4:87] Reflect on the greatness of Allah ‘azza wa jall who is able to bring all of mankind, from the old ages to the last of times, together in one place. Every day think about your standing in front of Him, Al-Jaami’.

2.Strive for the shade of Al-Jaami’.

Couple your knowledge and remembrance of the Day of Judgment with action.The Prophet salallahu ‘alayhi wa sallam said: There are seven whom Allah will shade in His Shade on the Day when there is no shade except His Shade: a just ruler; a youth who grew up in the worship of Allah, the Mighty and Majestic; a man whose heart is attached to the mosques; two men who love each other for Allah’s sake, meeting for that and parting upon that; a man who is called by a woman of beauty and position [for illegal intercourse], but he says: ‘I fear Allah’, a man who gives in charity and hides it, such that his left hand does not know what his right hand gives in charity; and a man who remembered Allah in private and so his eyes shed tears [Al-Bukhaaree, Muslim]

Study each type carefully and strive to practice (elements of ) each in your daily life: connect with and look after your local mosque, come together with people for the sake of Allah, give secret sadaqah and cry out of love and fear for Him when you are alone.

3. Observe the etiquettes of Friday.

Which role does yawm ul-Jumuah play in your life? Study the virtues of Friday and practice the sunan so you can be immensely rewarded. For example, read Surah Al-Kahf, perform ghusl, pray the Jumu’ah prayer, and listen to the sermon (khutbah) and go early for it. Also supplicate to Allah ‘azza wa jall as much as possible, especially the last hour after ‘Asr and send peace and blessings on the Prophet abundantly.*

Apart from bringing together your knowledge with action and your personal acts of worship like salah, Al-Jaami’ rewards you for your acts of helping creation and bringing people together.

For example, pray in congregation, but also try to reconcile two parties in conflict and bring people together by sharing your dinner. Remember, unity doesn’t mean there are not differences in opinions, strategies, and backgrounds; it means you should be united through a bigger picture, seeing the Quran and the Sunnah as the rope you are holding on to together. As Al-Jaami’ says:  And obey Allah and His Messenger, and do not dispute and lose courage and your strength would depart; and be patient. Indeed, Allah is with the patient  [Quran, 8:46]

O Allah, Al-Jaami’, we know that You bring together and gather all things. Make us reflect on the ways You brought to us and the rest of creation together and aid us to observe the sunan of yawm ul-Jumuah. Make us of those who join and stay with the jama’a (congregation), bring others together for good, and open our hearts to remember the Day of Gathering often and strive for Your shade, ameen!

*The rewards of the sunan of Friday are mentioned in different narrations. The Prophet salallahu ‘alayhi wa sallam said:  The best of days is Friday; so increase in conveying peace and blessings on me that day, for your blessings will be submitted to me [Abu Dawood, An-Nasaa’i, Ibn Majah]

Seek the hour in which there is hope that prayers will be answered, on Friday after Asr prayer, until the sun goes down [At-Tirmidhee]

Whoever makes his wife do ghusl and does ghusl himself on Friday and goes out early, walking not riding, and comes close to the imaam and listens [to the sermon] without interrupting, will have for each step he takes a reward equal to that of fasting and praying at night for one year[Ahmad, at-Tirmidhee]

In another narration the use of perfume is mentioned in addition to above sunan and the reward is mentioned as:his sins in-between the present and the last Friday would be forgiven [Al-Bukaaree]
Wallahu ta’alaa ‘alem.