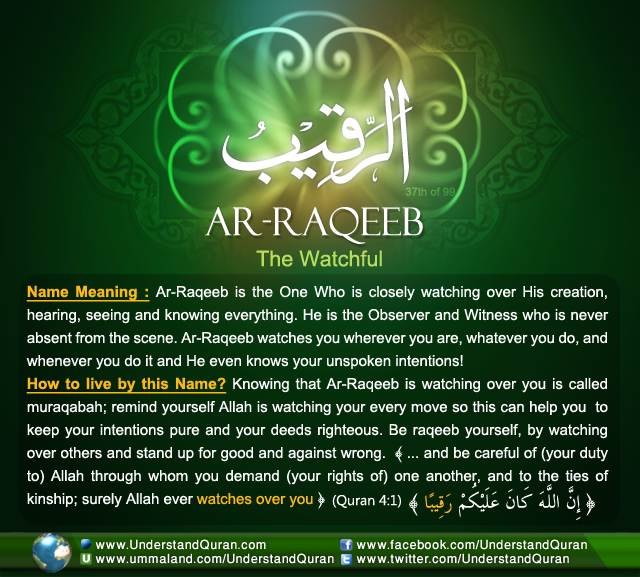 Allah calls Himself Ar-Raqeeb— The Watchful, The All-Observing, The Witness— on three occasions in the Quran. Ar-Raqeeb is the One Who sees what is hidden in the hearts and He is the One Who charges your soul for what it has earned. He is the All-and-Ever-Watchful, observing everyone’s actions, thoughts, and feelings. Ar-Raqeeb is also The Controller; preserving and organizing the affairs of creation with the perfect planning!

The Watcher, The Observer, and The Controller

Raqeeb comes from the root raa-qaaf-baa, which points to three main meanings. The first meaning is to look, watch, observe, and be vigilant. The second main meaning is to erect in order to care for something. Raqeeb is the one who takes charge, which includes protecting, maintaining, and preserving. The third is to regard, to hold in consideration and respect.

This root appears 24 times in the Quran in six derived forms. Examples of these forms are raqabatin (“a slave”), raqeebun (“an observer”), fartaqib (“so watch”) and laa yarquboona (“they do not respect (the ties) ”).

In the Arabic language raqeeb means is the one who watches over or supervises things. That includes raqeeb al-jaysh (sergeant) who guards and protects, and raqeeb al-qawm who guards the people. [See: Lisaan al-‘Arab under ‘raqiba’] A marqab is a high place on which someone is on guard to observe what is beneath and ar-raqaba is the neck, because it is erect.

A beautiful example of belief in Ar-Raqeeb

Narrated `Abdullah ibn Zayd ibn Aslam, from his father, from his grandfather, who said: When I was accompanying `Umar ibn al-Khattab on his patrol of Madinah at night, he felt tired, so he leant against a wall. It was the middle of the night, and (we heard) a woman say to her daughter, “O my daughter, get up and mix that milk with some water.” The girl said, “O Mother, did you not hear the decree of Amir al-Mu’minin (chief of the believers) today?” The mother said, “What was that?” The girl said, “He ordered someone to announce in a loud voice that milk should not be mixed with water.” The mother said, “Get up and mix the milk with water; you are in a place where `Umar cannot see you.” The girl told her mother, “I cannot obey Him (Allah) in public and disobey him in private.” [Sifat al-Safwah and Wafiyat al-A’yan and cited by Ibn al-Jawzi in Ahkam al-Nisa’]

This is an example of how we should understand and be aware of Ar-Raqeeb. This young woman was upright in her deeds, in public and private, because she believed that Allah was observing her at all times! The righteous leader ‘Umar Ibn Abdul-Azeez descended from her!

1. Know that you are never alone.
A scholar in the past advised: “Repeat the following statement whenever you go to bed, wake up or go out, “Allah looks at me; Allah watches me; Allah witnesses me”. Knowing that Ar-Raqeeb is watching over you is called muraqabah; remind yourself Allah is watching your every move, feel His presence and converse with Him, making dua to Him to keep your intentions pure and your deeds upright. When someone you look up to is watching you, you always try harder, what about Allah? So next time give extra sadaqah, pray on time and read the Quran more and impress Ar-Raqeeb!

2. Mind your words.
Some of us might stay away from the major sins, such as adultery and interest, but we daily commit thousands of sins with the way we speak and what we speak about. Be inspired by Ar-Raqeeb to mind every word you speak and ask yourself: does this speech please Allah or make Him angry?  Allah says: Man does not utter any word except that with him is an observer prepared [to record]. [Quran, 50:18]

3. Remember Ar-Raqeeb when you are tempted.
One day Umar ibn al-Khattab radiyallahu ‘anhu found a shepherd and asked if the boy would sell him a sheep. The boy replied that it was not his. `Umar ibn al-Khattab made him an offer to see how he would react, He said: “If your master asks you, tell him that the sheep was eaten by a wolf.”  He looked at him and said, “And what would I say to Him (i.e. Allah)?”  `Umar cried and said, “By Allah, you are right.  What would you say to Him?” Whenever you feel tempted to something haraam or not doing something Allah wants from you (like praying, wearing hijab etc) think about Ar-Raqeeb watching you; would you dare to look up to the sky and say ‘no’ to Allah? A’udhubillah!

4. Be raqeeb to yourself.
Be raqeeb yourself, by watching over others and stand up for good and against wrong. And be on the watch for the Shaytan and his tricks!

When the Prophet Yunus ‘alayhi sallam was all alone in the whale, what did he say? Then he called out in the darkness (saying), “There is no god except You. All Extolment be to You! Surely, I have been of the unjust. [Quran, 21:87]

O Allah, Ar-Raqeeb, we know that You watch over and control all things. Guide us to be watchful over our hearts and our obligations towards you, adorn us with ihsaan, worshiping you as though we see You for if we don’t see you, You surely see us, aid us in purifying our intentions, help us remember Your watchfulness over us, and make this awareness an inspiration for us to increase our good deeds and stay away from our bad habits, ameen!