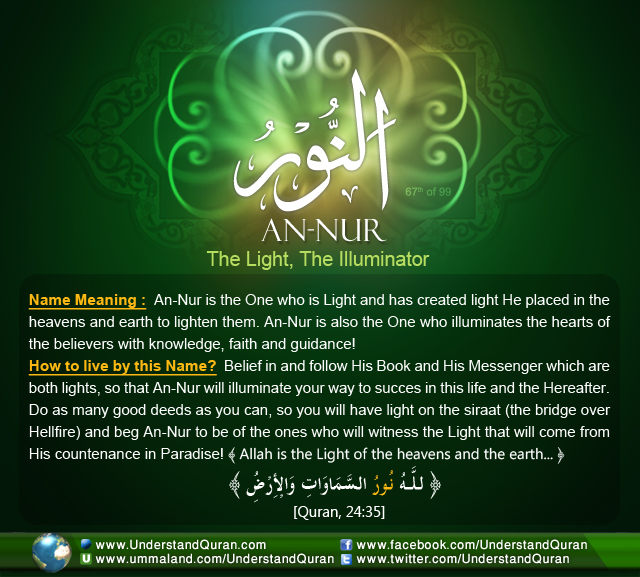 Allah calls Himself An-Nur—The Light, The Illuminating— on one occasion in the Quran. He is the one who is the light and from whom comes all light. An-Nur is the light of the heavens and earth, and His light clarifies and reveals, both physically and spiritually!

The Light, The One who reveals and illuminates

An-Nur comes from the root noon-waw-raa which points to four main meanings. The first main meaning is to give light and illuminate and the second to make visible, reveal,, and clarify. The third main meaning is to be flaming, blazing, and apparent to the senses, and the fourth main meaning to enlighten or give advice.

This root appears 194 times in the Quran in three derived forms.  Examples of these forms are an-naara (the Fire), nuruhum (their light)  and muneerah (illuminating).

Linguistically, nur is used to indicate anything that gives off light, in the form of rays for example, and is that which makes things visible. Referring to Allah ‘azza wa jall, He is the one by whom everything is made visible, whose attribute is light, and He is the One who illuminates (munawwir) and the One who guides (Haadi) the heavens and the earth!

An-Nur Himself says: Allah is the Light of the heavens and the earth. [Quran, 24:35]

The essence of Light

In the Quran and Sunnah we can find that Allah ‘azza wa jall has a nur (light) related to Him as an attribute of His essence. This is the same as His other attributes, for example sight, knowledge, might, etc. An-Nur says: And the earth will shine with the Light of its Rabb. [Quran, 39:69] This refers to the magnificent moment Allah ‘azza wa jall will come on the Day of Resurrection to judge mankind.

The Prophet salallahu ‘alayhi wa sallam stated about Allah’s attribute of nur: You are the Light of the heavens and the earth.[Al-Bukhaaree] He salallahu ‘alayhi wa sallam also said the very weighty words: Light is His hijaab (veil), if He uncovers it then the subuhaat (brightness and splendour) of His Face would burn His creation so far as His Sight reaches. [Muslim]

The scholars mentioned the light that is a part of Allah ‘azza wa jall and His attribute and the light given to the creation, both perceived— like from the sun and the moon— and spiritual. In surah An-Nur, ayah 35, Allah ‘azza wa jall describes His Light: The example of His light is like a niche within which is a lamp, the lamp is within glass, the glass as if it were a pearly [white] star lit from [the oil of] a blessed olive tree, neither of the east nor of the west, whose oil would almost glow even if untouched by fire. Light upon light. Allah guides to His light whom He wills. And Allah presents examples for the people, and Allah is Knowing of all things. [Quran, 24:35]

Ibn al Qayyim rahimahullah explained it as a spiritual light bestowed by Allah ‘azza wa jall upon the heart of His believing slave [Ijtimaa’ al-Ju-yoush al-Islaamiyyah] The niche is compared with the chest of the believer; inside the niche is a glass, of the most crisp and clear kind, and this glass resembles the heart of a believer. It sees the truth by virtue of its clarity and, similar to the olive oil, is the substance of the believing heart;it is from the “tree” of Revelation (that  which Allah ‘azza wa jall revealed in His books). [Ibn al Qayyim’s al-Waabil as-Sayyib] The stronger a believer adheres to the revelation, the stronger the roots in his heart are!

An-Nur says: There has come to you from Allah a light and a clear Book. [Quran, 5:15] This light is the Prophet Muhammad salallahu ‘alayhi wa sallam. The first step is to really treat the Quran and Sunah as your guide and deeply realize that only they are your way to receive the spiritual light of An-Nur.  Through them you can see the reality of things and you will learn to clearly distinguish between good and bad.

2. Strive for His light.

Strive for His light by making understanding the Quran a priority in your daily life. Each day at least read one ayah and its meaning and practise it. Learn to understand the original language of the Quran. The light which An-Nur puts in your heart when you submit is faith in Him, knowledge, and love and remembrance of Him. Make the Quran and sunnah priority in your daily life so An-Nur will guide you and bless you with spiritual clarity.

Do many good deeds for the sake of An-Nur so that He will put light on your face in the Hereafter: [Some] faces, that Day, will be radiant, looking at their Lord. [Quran 75:22-23] A beautiful way to increase your worship is to think about your intention consciously throughout the day and re-invent your intention by changing random deeds like cleaning, cooking, working, etc. with the intention of pleasing Allah ‘azza wa jall.

4. Think of the light on the Day of Judgement

The more your heart was responding to the light of the revelation (Quran and sunnah) in this life, the stronger your light will be on that dreadful day! So increase in doing good by seeing these deeds as a reason for light in the darkness of the Hereafter in shaa Allah!

Each day realize that An-Nur has guided you from the darknesesses of disbelief to the light of Islam and thank Him from the bottom of your heart.

Use this supplication from the Quran related to light:
يقولونربناأتمملنانورناواغفرلناإنكعلىكلشيءقدير

They will say: Our Lord, perfect for us our light and forgive us. Indeed, You are over all things competent  [Quran, 66:8]

And this beautiful invocation for when you go to the mosque:

O Allah, An-Nur, we know that You are Light and all kinds of light come from you. Guide us in following Your revelation, so it can be a source of light for us in this life and the next. Aid us in doing many good deeds so our faces will be shining with light in the Hereafter, light will emerge for us on the siraat so we can witness Your Light in Paradise, ameen!

To read more about the parable of the light of Allah by Ibn Katheer, please click here.