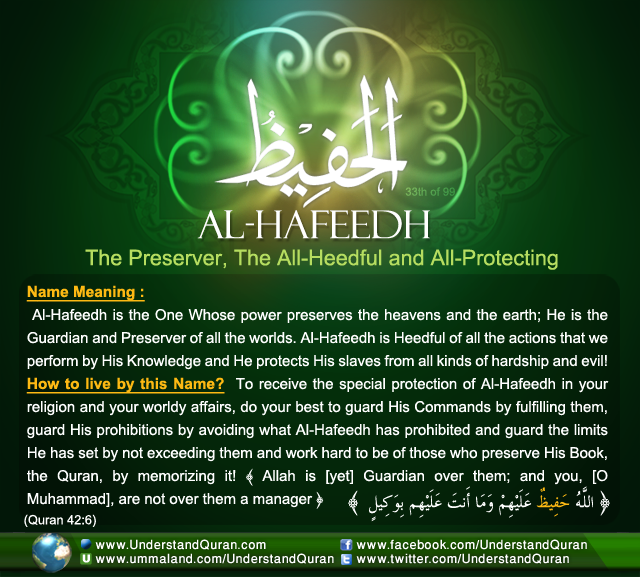 Allah calls Himself Al-Hafeedh— The All-Preserver, The All-Heedful, The All-Protecting— on three occasions in the Quran. He is the One Who created and preserves the worlds and what they contain. Al-Hafeedh is heedful of all we do and He protects us from things we do not even realize, giving believers many opportunities to earn His special protection!

The Ultimate Preserver, Guardian, and Protector

Hafeedh and Haafidh come from the root haa-faa-dhaa, which points out to three main meanings. The first meaning is guarding, protecting, retaining and taking care of. The second main meaning of this root is to prevent from perishing or becoming lost and the third is to be watchful, mindful, attentive, and vigilant.

This root appears 44 times in the Quran in eight derived forms. Examples of these forms are haafidheen(“guardians”), mahfoodh (“guarded, protected”), and wahaafidh’naahaa (“and We have protected it”).

Linguistically, haafidh is used for someone who memorized the Quran. Al-Hafeedh is the Ultimate Preserver, Guardian and Protector of the whole creation.

Allah ‘azza wajall negated forgetfulness on Himself; He will protect and guard knowledge and never forget it. Musa ‘alayhi sallam testified to this fact, saying: The knowledge thereof is with my Lord, in a Record. My Lord is neither unaware nor He forgets. [Quran 20:52]
We should know that haafidh is made of three aspects; first knowledge (‘ilm), then preservation (hifdh) and then recompense (hisaab). For example, removing a small piece of dirt from the floor so it wouldn’t make someone slip. Even though no one saw it, you need to be sure Allah knows about it, then you should be sure He will preserve it (hifdh) and finally you should be certain that Al-Hafeedh will recompense you for it.
This goes for anything anyone does for Allah’s Sake! Therefore there’s a relation between the beautiful names Al-‘Aleem (the All-Knowing), Al-Hafeedh (The All-Preserving) and Ash-Shakoor (The Appreciative).

1. Be motivated by Al-Hafeedh.
Al-Hafeedh is heedful of everything you do by His knowledge, He orders His angels to record everything you do. Even the smallest deeds, like coming to an Islamic lecture, sitting nicely, and making notes— Al-Hafeedh will preserve and appreciate it. When you know this you will really be a slave of Allah ‘azza wa jall and not of people.

2. Fear Al-Hafeedh.
He is also Al-Hafeedh when you do bad actions. Remember even with your “very small” wrong deed He sees, preserves, and will recompense you for it unless you repent. For example in prayer you need presence of the heart; khushoo means presence of the heart (hudoor al qalb) plus understanding (fahm).
Maybe in only one rukoo you remember Allah and the rest of the time your heart is distracted or heedless. Allah is hafeedh and He even knows you only remembered Him in rukoo’; then He will keep this remembrance in rukoo’ for you and will reward you according to this. Depending on whether your deed was good or bad al-Hafeedh will reward you or punish you, so this name gives you both hope (rajaa) and fear (al-khawf or khashiyah).

3. Remember people.
One of the sifaat ul mu’mineen – attributes of the believers— is being mindful and attentive to others. Maybe you met someone once and you lent her your pen and she remembers that so many years later, you would feel happy. The best example of this quality of remembering is the Prophet sallallahu ‘alayhi wa sallam, who never forgot Khadeejah radiyallaahu ‘anha.

4. Memorize the Quran.
Work hard to be of those who preserve His Book, the Quran, by memorizing it. When memorizing His Book call upon Al-Hafeedh and ask Him to preserve and keep it in your mind.

5. Purify your heart.
For example you talk bad about someone just because you dislike them. Al-Hafeedh will never forget what you did; this knowledge will be preserved with Him and maybe after a period of time you will be put in the same situation where you are innocent and yet someone accuses you wrongly or says something untrue about you. When this happens it is for you to recall and repent for what you did to someone else. Al-Hafeedh is giving it as a test to nurture you because He has this knowledge preserved whereas maybe you forgot or saw it as insignificant.

6. Strive for the special protection of Al-Hafeedh.
Aboo Tayyib At-Tabaree , an early scholar, was about hundred years old and he was physically strong like the young man. Once after an exhausting journey, Aboo Tayyib At-Tabaree jumped off the boat on the land. People were amazed. He said: When I was a young man, I preserved these bodily limbs from the disobedience of Allah and Allah preserved them for me in my old age. [Ibn Rajab]
To receive the special protection of Al-Hafeedh in your religion and your worldy affairs, the Prophet said: Guard Allah (His commands) and He will guard and protect you. [Ahmad, At-Tirmidhee]

8. Reflect on your environment and increase your awe for Al-Hafeedh.
Look around you and be amazed by the way Al-Hafeedh is able to preserve even the biggest creations. It is He Who preserved the sky from falling on us. We come up with ways by His leave to preserve even the food in fridges and by salt so we can use it longer, as well as the money in the bank. Allah is Al-Hafeedh and He guides humans for a means to even preserve food, health, and wealth.

9. Repent to Al-Hafeedh.
This name should shake you even more than the name Al-‘Aleem, because Al-Hafeedh not only implies that He knows everything, He even remembers the smallest things. You need the forgiveness of Al-Hafeedh, so another important impact of this name is that it will make you not delay but hasten to repent.

O Allah, Al-Hafeedh, we know that You preserve all there ever was, is, and will be. Give us your special protection by aiding us to fulfill Your commands, help us to be mindful of even the smallest sins, and make us rush to repent and be thankful to You for Your protection. Honour us by making us of those who memorize the Quran and support us in our belief and awareness of Your knowledge, preservation and recompense so we will strive to please You and earn Your Gardens, ameen!