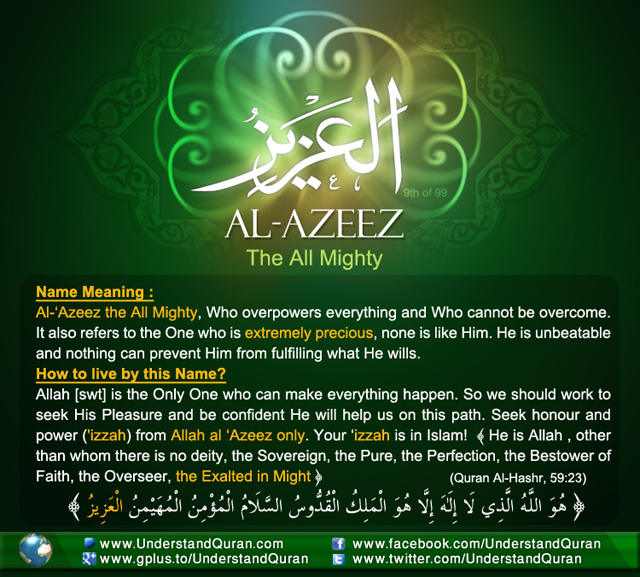 Allah calls Himself Al-‘Azeez— The Almighty, The Strong– on 92 occassions in the Quran. He is the One who overcomes everything. Al-‘Azeez is the incomparable source of all strength and might, and His power cannot be overcome or resisted. He gives honour, dignity, and strength to whomever He wills!

The Powerful, Noble, Invincible, and Incomparable

‘Azeez comes from the root ‘ayn-zay-zay, which points to four main meanings. The first main meaning is to be mighty and powerful and the second is to be noble and elevated. The third main meaning is to be invincible, and the fourth is to be rare and unattainable.
This root appears 119 times in the Quran in 7 derived forms. Examples of these forms are waʿazzanee (“and he overpowered me”), a’azzu (“mightier”), and ‘izzan (“an honor”).

Linguistically, al-‘izz originally means strength (quwwah), severity (shiddah), and conquest (ghalabah). ‘Azeez points to three concepts: ya’izzu, which means nobility, ya’uzzu, which means to prevail and be dominant, and ya’azzu, which means being mighty and powerful. Al-‘Azeez is the Noble One, no one is like Him, He is ghaalib and has overcome everything in that He has subdued it [Ibn Katheer] and He is the Invincible who cannot be reached and overcome. [Al-Qurtubi]

A beautiful poem about Al-‘Azeez

Ibn ul Qayyim raheemahullah wrote in his Nooniyyah: And He is al-Azeez whose (status) cannot be reached (overcome) How can He be reached, the owner of all Power? And He is al-‘Azeez, the Overpowering (al-Qaahir), the Subduing Overcomer. Nothing overcomes Him, so these are two characteristics. And He is al-Azeez, with Strength (quwwah) and this is His description. Al-Izz, therefore, has three meanings. And these are the ones that are perfected for Him, free is He of all imperfection, From every single aspect, the One who is devoid of any deficiency.

A powerful and wise combination

How many people have power but misuse it? The combination Al-‘Azeez-ul-Hakeem (The All-Mighty, the All-Wise) appears 47 times in the Quran; Allah al-‘Azeez uses His power with perfect wisdom. Allah ‘azza wa jall uses Al-Azeez-ur-Raheem (The All-Mighty, The Merciful) which occurs twelve times in surah Ash-Shu’araa after the narration of each destroyed nation. Against the disbelievers He is mighty and especially merciful to the believers striving on His path.

1. Seek your strength from Al-‘Azeez.
Having faith in Al-‘Azeez gives you courage because you know Your Lord is unbeatable. Whatever He wills happens, even if the people will otherwise, and whatever He wills not to happen won’t, even if the people will it. So only work to seek His pleasure and be confident He will help you. He has power over all things, so accept whatever happens to you and show sabr (perseverance) and shukr (gratefulness) for whatever befalls on you. When you feel weak or overpowered, turn to Al-‘Azeez for strength.

2. Know that your ‘izzah is in Islam.
Your honor does not lie in money, power, or looks; rather your honor is only in Islam. How many seek honor from other things or people? Al-‘Azeez said: Those who take disbelievers for protectors (or helpers or friends) instead of believers, do they seek honor, power and glory with them? Verily, then to Allah belongs all honour, power and glory. [Quran, 4: 139] Seek your honor in this life and the next from Al-‘Azeez only, by obeying Him and following His Messenger.

3. There’s no hiding from Al-‘Azeez.
Let Al-‘Azeez make you recognize that no matter who you are, how pious or “high-positioned” you are, you can never hide from His might and power. The repetition of Al-‘Azeez in the Quran can teach you that you constantly have to remind yourself that you can never go against His Will, and He is mighty against those who disobey Him.

4. Power doesn’t mean honor!
Always use your own “power” or authority in an honourable way, over your children or spouse for example. Train yourself to have strength to resist desires by reminding yourself of the wisdom Al-‘Azeez, who uses His power with wisdom, and always try to strengthen others with your advice, skills, or company.
The Prophet salallahu ‘alayhi wa sallam said: Whoever a believer is humiliated before him and he does not help him when he is able to do so, Allah will humiliate him before the creation on the day of judgment. [Ahmad]

5. Honor trusts.
The Prophet salallahu ‘alayhi wa sallam said: All of a Muslim is inviolable to another Muslim: his blood, his wealth and his honor [Muslim]. Don’t harm others by your tongue or hand; don’t backbite, slander, or misuse their belongings or even expose their faults.
You can even earn Allah’s protection from the Fire by defending someone’s honor. The Prophet salallahu ‘alayhi wa sallam said: Whoever defends the honor of his brother, then Allah will protect his face from the Hellfire on the Day of Resurrection. [At-Tirmidhee]
An example is to rebut backbiting in a company and to mention something good about the person in his or her absence. Your relationships with others are a trust (amaanah) from Al-‘Azeez and you should honor each trust you are given— in your dealings with others, as well as your own body and emaan— by looking after them according to the guidelines of Al-‘Azeez.

6. Use the Quran, al-’azeez!
Allah ‘azza wa jall called the Quran azeez because it is His speech: Verily, those who disbelieved in the Reminder (the Qur’ân) when it came to them (shall receive the punishment). And verily, it is an honourable respected Book. Falsehood cannot come to it from before it or behind it (it is) sent down by the All-Wise, Worthy of all praise. [Quran, 41:41-42]
Stop and reflect; this means the Quran contains everything you need to succeed in life, because it comes from your Creator. It is your manual— and why is a manual read? Only because you want to make something work. So don’t just read the Quran but also use it as your manual.