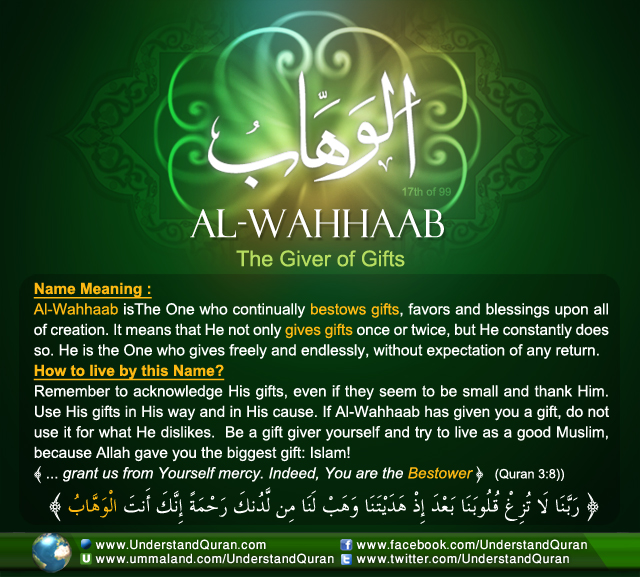 Allah calls Himself Al-Wahhaab— The Giver of gifts, The Most Liberal Bestower— three times in the Quran. He is the All-Giver who bestows gifts, favors, and blessings upon the whole creation. Al-Wahhaab gives gifts constantly, generously, endlessly, and without expecting anything in return!

The Great Giver, the One who constantly bestows

Wahhaab comes from the root waw-haa-baa, which points to three main meanings. The first meaning is to give for no compensation, to offer as a present, or to bestow and the second is to grant or endow. The third main meaning is to cause something to be.

This root appears 25 times in the Quran in two derived forms. Examples of these forms are:  hab (“grant”) and yahabu (“he grants”).

Linguistically, wahhaab has the structure of intensification and is the intense form of Al-Wahib, the giver. The word hiba means gift. Al-Wahhaab is the source of all gifts, bestowing favors with the most detailed wisdom. His gifts come in the form of moments you experience, scenes you see, things you hear, and as material blessings.

Al-Wahhaab Himself says: Or do they have the depositories of the mercy of your Lord, the Exalted in Might, the Bestower? [Quran, 38:9] He said, My Lord, forgive me and grant me a kingdom such as will not belong to anyone after me. Indeed, You are the Bestower. [Quran, 38:35]

How can you recognize a gift?

Rizq (provision) is something that’s written for you, but you have to work for it; it depends in part on your efforts. A gift (hiba) isn’t something directly related to your efforts. A person you missed suddenly calling you or getting something just at the right moment are gifts. Sometimes you give gifts to someone you love and sometimes you give gifts to draw someone closer to you. What does it mean when Al-Wahhaab gives you a gift? It might mean that He gives you a gift so that you can come closer to Him, even though you were going astray.

1. Remember Al-Wahhaab.
When someone gives you a gift, you thank him or her. So what about the Giver of all gifts? The difference between a believer and disbeliever is that the latter lives with the gifts of Allah ‘azza wajal but doesn’t remember Him, while a true believer knows the giver through the gifts. Always be thankful to your maker for everything you get. If you contemplate the universe you get to know Allah; if you realize His gifts, your heart will melt out of love for Him.

2. Be a true giver.
Al-Ghazali said: Whoever bestows gifts with an eye to some interest to be realized by it sooner or later, either appreciation, affection or release from blame, or acquiring distinction of mention— he is neither a giver nor generous, but rather engaged in transaction and recompense . . . But the one who sacrifices all he owns, even his life, for the sake of Allah alone— such a one is worthy of being named giver and generous. Make your way of giving an act of ‘ibaadah (worship). How? Give gifts or favors for the sake of Allah ‘azza wa jall and not to get something in return.

3. Use the gifts of Al-Wahhaab in the right way.
Thank Al-Wahhaab by using His gifts to please Him. An example is the mobile phone; Al-Wahhaab gave you this technology, so use it for sharing knowledge and not for wasting time. If He gives you a nice afternoon with friends, don’t use it for backbiting or spending time in places of immoral behaviour.

4. Learn from the love of the companions.
Ja’far’s right hand, may Allah be pleased with him, was chopped off in battle, so he held the Islamic flag with his left hand. Another blow chopped off his left hand, so he held the flag up with his upper arms and held it there until he died. What love could drive him to sacrifice his life? Read about and learn from this and other great role models and sacrifice for Al-Wahhaab out of deep love.

5. Ask al-Wahhaab.
Amazingly, using this ism (name), there are more than one Quranic invocations; you will find the prophets, peace upon them, asking Al-Wahhaab for mercy, offspring, etcetera, ending with innaka anta al-Wahhaab– verily You are Al-Wahhaab. Look for these ayaat, memorize them, and use them in your daily life.

5. Don’t praise yourself.
Sometimes we say, I got married, worked hard, and got a beautiful house. Or we say, I gave my child a good upbringing, that’s why he is so good-mannered— I made my son like that! Don’t forget it was Al-Wahhaab who bestowed these favors on you. Your child is given to you as a gift from Al-Wahhaab. And We granted him (Abraham) Isaac and Jacob, each of whom did We guide; and before him, We did guide Noah, and among his progeny, David, Solomon, Job, Joseph, Moses and Aaron. Thus do We reward the good-doers. [Quran, 6:84]

6. Ponder what Al-Wahhaab has given you.
First of all, He gave you your existence. Then think of the greatest gift Al-Wahhaab gave you: guidance. Think about water, which is scentless and colourless. Imagine if water were sticky— how could you wash yourself? Look at your memory and how Allah gave foods a nice smell. All of these are gifts of Al-Wahhaab; ponder them.

7. Give gifts to others.
The Prophet salallahu ‘alayhi wa sallam said, Give gifts, for this will increase your mutual love [Muslim]. No human being gives anything for nothing, even if it’s that we give to gain the reward of Allah ‘azza wa jall by it. The only One Who gives asking for nothing in return is Al-Wahhaab. If a human being gives you a gift, It is Al-Wahhaab who inspired him to give you what he has given you! So first thank Allah ‘azza wa jall for inspiring people to help you, and then be grateful to the people by doing a favor for them, or, if you can’t, by saying jazakAllahu khayran or barakAllahu feek(i).

O Allah, Al-Wahhaab, we know You are the Giver of all gifts. Make us of those who are grateful for Your gifts and use them to please You, and adorn us with love for You. Make us ponder Your gifts, inspire us to give gifts to others, and give us from Your mercy that overwhelms us in this present world and the world to come. Verily, You are the best giver of gifts, ameen!