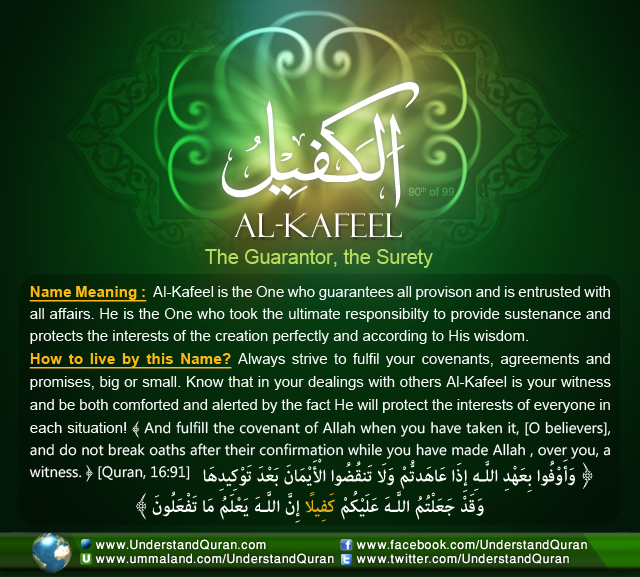 Allah calls Himself Kafeel— Guarantor, Surety— once in the Quran. Al-Kafeel is the only one able to protect the interests of the whole creation. He is the guarantor of all oaths, and He guarantees all material and spiritual provisions according to His wisdom. He is the best surety in the affairs of all!

The Guarantor, Surety, Responsible, and Witness

Kafeel comes from the root kaaf-faa-laam, which points to three main meanings. The first meaning is to guarantee, to be surety and witness, and the second is to take charge of. The third main meaning is be entrusted with the care of something.

This root appears 10 times in the Quran in five derived forms. Examples of these forms include yakfulu (“takes charge [of]”), kiflun (“a portion”) and al-khifli (“Dhul Kifl”).

Linguistically the kafeel of someone else is the person who takes someone under his or her care and takes responsibility for that person.

Al-Kafeel is the one and only creator, who takes ultimate responsibility for the complete creation, taking care of all affairs, fulfilling His oaths, and witnessing all oaths made by others!

Al-Kafeel Himself says: . . . And fulfill the covenant of Allah when you have taken it, [O believers], and do not break oaths after their confirmation while you have made Allah, over you, a witness. Indeed, Allah knows what you do. [Quran, 16:91]

Allah is sufficient as guarantor

Summarized from Imam Al-Bukhaari in his saheeh there is a story of a man from the children of Israel who asked another to borrow thousand dinars. The second man asked, Do you have a witness (for this transaction)? The first man replied, I have no witness except Allah. The other then asked, Do you have a guarantor? The man said, I have no guarantor except Allah. The second man said, Allah is ever all-sufficient as a Disposer of affairs.

He then gave him the money; they parted and agreed on a place and time to pay back the loan. When the man wanted to pay back the money at the set time he could find no boat to reach the other man who lived across the river.  He said, O’ Allah, he asked me for a witness and I found no one but you; he asked me for a guarantor, and I found no one but you. O’ Allah, make this letter reach him.

He placed the money with a letter in a hollowed out piece of wood and hurled it into the river. By the permission of Allah it floated forward according to a guided course.

The lender went to the shore in keeping with the appointment. He waited for a little while, and when the other man did not come, he said to him, Why don’t I at least take some firewood for my family? He passed by the piece of wood and took it home. Finding that it was hallow, he broke it open and found the money with the letter.

Allah ‘azza wa jall is truly the best guarantor and disposer of affairs and in Him should we trust:  And in Allah should the believers put their trust.  [Quran, 3: 122]

2. Take your promises seriously.
Don’t worry, I’ll do that for your tomorrow! I’ll give it back to you next week! So easily we make promises and set agreements regarding big and small matters, but do we realize it is a commandment of Al-Kafeel Himself and obligatory to fulfil them?

Fulfilling your promises brings you enormous rewards, such as the love of Allah ‘azza wa jall! Yes, whoever fulfils his pledge and fears Allah much; verily, then Allah loves those who are the pious. [Quran, 3:76]  Keep yourself in check with the following hadeeth. The Prophet salallahu ‘alayhi wa sallam said: Whoever breaks the covenant of a Muslim, upon him be the curse of Allah, the angels and all the people, and Allah will not accept any obligatory or voluntary act of worship from him. [al-Bukhaari, Muslim]

3. Put your trust in Al-Kafeel.
Allah ‘azza wa jall says: And put your trust in Allah if you are believers indeed. [Quran, 8:23] Let your faith in the promise of Allah increase so that you will call upon Him from your heart. Do whatever you can, but then learn to entrust your affairs to Him, knowing He will take care of you better than anyone or anything else. Allah says: Invoke Me, I will respond to your [invocation]. [Quran 40: 60] Train yourself to turn each worry and distress into a supplication!

4. Beware of these four characteristics.
Be inspired by this beautiful name to take your responsibilities to the best of your abilities!  The Prophet salallahu ‘alayhi wa sallam said: There are four characteristics, whoever has them all is a pure hypocrite: when he speaks he lies, when he makes a promise he breaks it, when he makes a covenant he betrays it, and when he disputes he resorts to obscene speech. Whoever has one of them has one of the characteristics of hypocrisy, until he gives it up. [Al-Bukhaari, Muslim]

O Allah, Al-Kafeel, we know that You are the best guarantor. Make us of those who fulfil our covenant with You and guide us to worship You in a way pleasing to You so You will admit us to Your Paradise. Bless us with truthfulness in speech and actions, aid us to keep our covenants with others and protect us from being guilty of betrayal and being betrayed by others. Ameen!