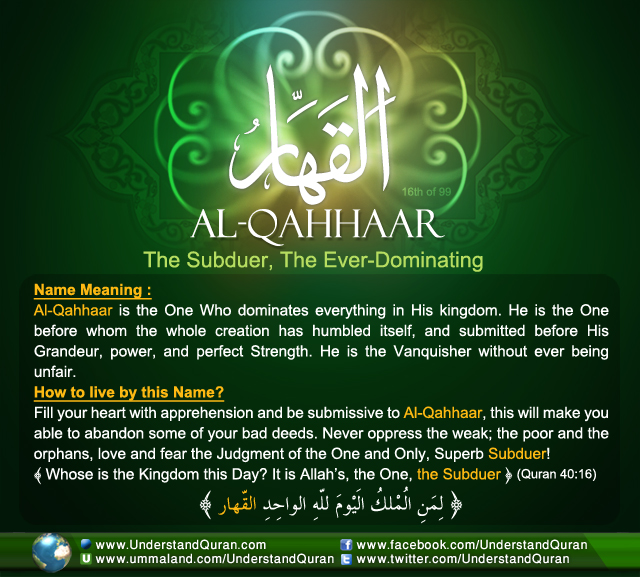 Allah calls Himself Al-Qahhaar— The Subduer, The Ever-Dominating— six times in the Quran. He is the One who prevails over all and to whom all creatures surrender. Al-Qahhaar dominates the whole universe, He is victorious over any opposition, and His will is irresistable.

The Subduer, the Prevailer, The Conquerer

This root appears ten times in the Quran in three derived forms. Examples of these forms are taqhar (“oppress”) and al-qaahiroona (“the subjugators”).

Linguistically, Qahhaar has the structure of intensification and is the intense form of Al-Qaahir, The Irresistible. Al-Qahhaar is the One with majestic strength. He has the supreme authority and ultimate power to do anything; He can subdue anyone to compel him or her to His will.
The names Al-Qahhaar and Al-Lateef (The Subtle) are sometimes used together to refer to the opposing yet complementary ways of Allah ‘azza wa jall; He is The Subduer, but also The Most Wise and the Most Just. Al-Qahhaar started life on earth by a blow in Adam’s body and ends by a blow on the trumpet.

The One and His supreme power

In each of the six ayaat in the Quran in which this beautiful name is mentioned it is amazingly combined with Al-Waahid (The One). Allah ‘azza wa jall demonstrates that every single creature submits to Allah willingly or unwillingly and that is by the power and force of Al-Qahhaar; this supreme power rests with Him only.
The skies, the earth, the angels, and all the creatures obey Him. Al-Qahhaar left us the choice: either we come to Him willingly or He’ll make us come to Him anyway. Allah says: . . . then said to it and to the earth, Come up (you two) willingly (or: in obedience) or unwillingly! They (both) said, We come up willingly. [Quran, 41:11]

A Soul-shaking Moment with Al-Qahhaar

One of the greatest examples is that the whole creation is subdued by death. Allah ‘azza wa jall describes to us an amazing scene: The Day when they will (all) come out, nothing of them will be hidden from Allah. Whose is the kingdom this Day? (Allah Himself will reply to His Question): It is Allah’s the One, Al-Qahhaar. [Quran, 40:16]

1. Submit. Surrender.
What does Islam mean? It means you submit and you surrender to the Lord of the Worlds. As his Lord said to him, Surrender, (i.e., be Muslim) he said, I have surrendered to The Lord of the worlds. [Quran 2:131] Surrender your heart, your limbs, your actions, your speech, your senses, your talents, and your skills all to Him by using them to do good deeds. Don’t submit to your own desires and whims; submit to Al-Qahhaar willingly. Know that submission is not a sort of humiliation but rather an apprehension and a beautiful glorification.

2. Ponder how Al-Qahhaar expresses His will.
The sea or the wind can be at times deadly and at other times beautiful and calm. Look at how Al-Qahhaar commanded nature to change at His will: the fire that didn’t burn Ibrahim ‘alayhi sallam, the knife that didn’t slaughter Ismaeel alayhi sallam, the whale that swallowed Yunus ‘alayhi sallam but didn’t digest him. Teach your children the stories of the Quran and ponder the effect of His will all around you, like gravity, water, and fire.

3. Be kind to the weak.
Be compassionate and kind to the weak, especially to the orphans and the poor. Then, as for the orphan, then do not subdue (him), and as for the beggar, then do not scold (taqhar). [Quran, 93:9-10] Imagine facing The Subduer, The Ever-Dominating, on the Day of Judgement, where people are either oppressors or oppressed. Who will be more fearful?

4. Be good to people at all times.
Remember the overpowering attribute of Allah ‘azza wa jall and be motivated to treat people well. Umar ibn al-Khattaab radiyallahu anhu asked his son to put his face in the dust as he was dying so that Al-Qahhaar would have mercy upon him. Umar Ibn al-Azeez ordered his servant to remind him of Al-Qahhaar in case he saw him oppressing anyone. Remind yourself of Al-Qahhaar to be good, just, and fair to others at all times.

5. Abandon your sins.
The Prophet salallahu alayhi wa sallam said: Two eyes will not be touched by Hellfire: An eye that cries from the fear of Allah, and an eye that spent the night in a guard post in the path of Allah (Jihad) [At-Tirmidhee] Al-Qahhaar compels your tongue at the time of your death and you might be unable to say la ilaaha illAllah because of your bad deeds. Have you noticed what a simple phrase la ilaaha illAllah is and that you can say it without even moving your lips? Still it is the will of Al-Qahhaar that will enable you or not enable you to say it. So abandon your sins and remember the power of Al-Qahhaar to subdue your limbs.

6. Ask Al-Qahhaar.
The Prophet salallahu alayhi wa sallam would say when he turned during sleep at night :
None has the right to be worshipped except Allaah, The One, Al-Qahhaar. Lord of the heavens and the Earth and all between them, The Exalted in Might, The Of-Forgiving [Al-Bukaaree, Muslim] Revive this sunnah in your life.

O Allah, Al-Qahhaar, we know that You overpower everything. Make us of those who bow to You in Islam, adorn us with apprehension of You, and aid us to surrender our hearts and our actions to You only. Make us ponder Your power, abandon our sins, and be kind to the weak, ameen!