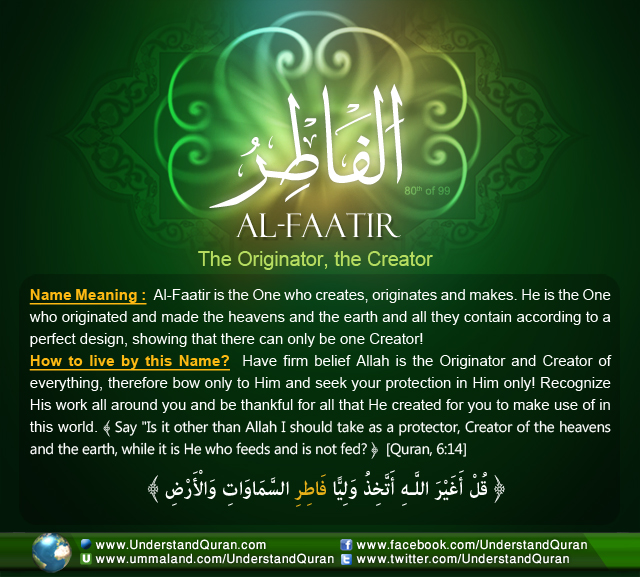 Allah calls Himself Al-Faatir— The Originator, The Creator, the Initiator— on six occasions in the Quran. He is the One who initiates and creates. Al-Faatir is the one who starts and finishes the complete creation with perfection!

The Initiator, the Creator and Originator

This root appears 20 times in the Quran in six derived forms. Examples of these forms are faTara (“He has created”), infaTarat (“is cleft asunder”), fuToorin (“flaw”) and munfaTirun (“will break apart”).

Linguistically, fatara al-shay’ means “he began the thing.” Ibn ‘Abbaas said: I did not understand what faatir al-samawaati wa’l-ard (Creator of the heavens and the earth) meant until two Bedouins came to me with a dispute about a well, and one of them said Ana fatartuha (I started it), meaning that he was the one who dug it first.

Abu’l-‘Abbaas said that he heard Ibn al-A‘raabi say: Ana awwal man fatara hadha (I am the first one who started this), meaning the first one to begin it [Taaj al-‘Aroos, 1/3347]
This means that the root faTara and faaTir may be used to refer to others than Allah ‘azza wa jall, however Allah is the only true Faatir as each and every thing is started by His will and power only.

In the Quran Allah starts a surah with: [All] praise is [due] to Allah , Creator of the heavens and the earth, [who] made the angels messengers having wings, two or three or four . . . [Quran, 35:1] Allah Al-Faatir teaches us beautiful lessons we can learn from this chapter: surah Faatir.
He ‘azza wa jall opens strongly stating it is He who is the Creator of the heavens and earth and therefore both praise and thanks belongs to Him.
Further in the surah Allah says: We gave the Book as an inheritance to those whom We chose from among Our servants; among them is the one who wrongs himself, and among them is also the one who takes a middle course, and of them is the one who is foremost in virtuous deeds by Allah’s permission; this is the great excellence. [Quran, 35:32]
Here Al-Faatir explains to us how of all of the creation, He chose a selection to be blessed with belief in Him, with Al-Islam. He then describes how we can classify ourselves into three groups, all of which are among the believers.
Al-Ḥasan al-Baṣri explained: the wrongful one is the one whose ill-deeds have overtaken his good deeds, the foremost one is the one whose good-deeds have overtaken his ill-deeds, and the middle-coursed one is the one whose good-deeds and ill-deeds are equivalent. This teaches us that true success, or excellence, lies not in materialism but in your good deeds outweighing your bad deeds.

1. Feel true praise and thanks.
Allah ‘azza wa jall starts surah Faatir with: Alhamdulillaahi faaTiris samaawaati wal ardh – [All] praise is [due] to Allah , Creator of the heavens and the earth..[Quran 35:1] You firmly believe He is the Creator, but how often do you really praise Him and how strong is your thanks to Him, for all He gave you?  Most important is that you say each alhamdulillah, with a strong conviction that He is your Creator, the Originator of all you see, feel, taste and touch!
Recognize His work all around you and be thankful for all that He created for you to make use of in this world. [He is] Creator of the heavens and the earth. He has made for you from yourselves, mates, and among the cattle, mates; He multiplies you thereby [Quran, 42:11].

2. Realize how blessed you are with Islam.
Halfway surah Faatir Allah says: We gave the Book as an inheritance to those whom We chose from among Our servants… [Quran, 35:32] Do you see the Quran as your inheritance? How much effort do you make to practise the Book Al-Faatir chose to reveal to you? Realize that as a Muslim you are blessed with the greatest bounty: belief. If you are weak in practising Islam still realize that you are part of His chosen slaves among His enourmous creation and let this motivate you to work harder. If you are already steadfast in your religion, keep reminding yourself this is from Al-Faatir only.

3. Seek love and protection at the source.
The most destructive quest is that for love and protection from the wrong sources. How many people have been consumed by their obsessive love for others instead of loving their Creator and disappointed and broken by their realization the creation could not protect them? Al-Faatir is the one who created the heavens and the earth and all that is in them and He is the only one who can protect you and love you like no other. Say, “Is it other than Allah I should take as a protector, Creator of the heavens and the earth, while it is He who feeds and is not fed?”[Quran, 6:14]
So bow to Him and seek Him only in ease and hardship! Like Yusuf ‘alayhi sallam beautifully supplicated: Creator of the heavens and earth, You are my protector in this world and in the Hereafter. Cause me to die a Muslim and join me with the righteous [Quran, 12:101]

4. Call upon Al-Faatir.
A beautiful way to praise and thank Him is to stick to the adhkaar of the Prophet salallahu ‘alayhi wa sallam, for example the morning and evening remembrance- a set of supplications to be said after fajr and after the ‘asr prayer.* One of them  is:

O Allah, Knower of the unseen and the evident , Maker of the heavens and the earth (faaTiras samaawaati wal ardh) , Lord of everything and its Possessor , I bear witness that there is none worthy of worship but You . I seek refuge in You from the evil of my soul and from the evil of Satan and his helpers . (I seek refuge in You) from bringing evil upon my soul and from harming any Muslim [At-Tirmidhee, Abu Dawood]. Memorize this beautiful dua’, make it part of your daily routine and revive the sunnah!

O Allah, Al-Faatir, we know that You originate, initiate, and create. Make us of the shaakireen (thankful ones) and of the ones whose good deeds outweigh the bad deeds. Guide us in seeking You only for protection, in directing our love to You first and foremost, and make us call upon You with conviction morning and evening, ameen!

*You can find the morning and evening remembrance by clicking here.