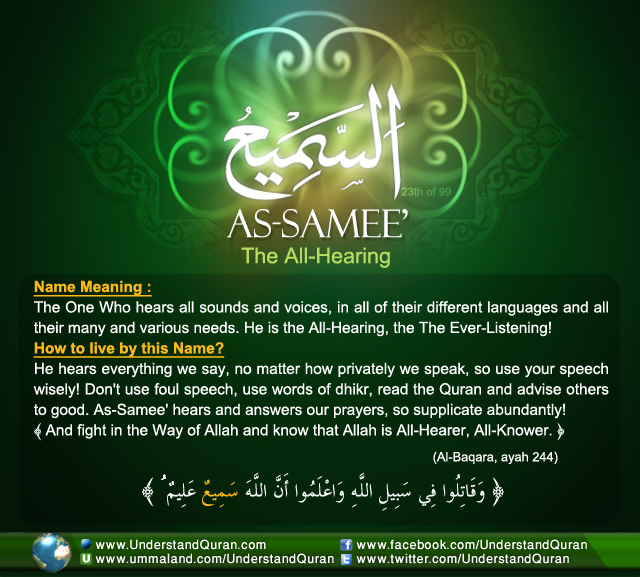 Allah calls Himself As-Samee’— The Hearing, The Ever-Listening— on 45 occasions in the Quran. He is the One whose hearing and attention comprehends everything. As-Samee’ hears every word, thought, and secret, and He listens to every voice. As-Samee’ listens and pays attention to everything, perfectly, eternally, and without any limits!

This root appears 185 times in the Quran in 10 derived forms. Examples of these forms are sami’a (to hear, to listen), tusmi’u (to make hear), and as-sam’a (the hearing).

Linguistically samee’ is on the structure of intensification. As-Samee’ refers to the perfection and the totality of Allah’s hearing, which cannot be compared with the hearing of any other created being.

As-Samee’ hears every single sound, every rustle of the tree, every voice, and every thought. Our most secret speech is an open declaration before Allah. As-Samee’ tells us: It is the same to Him whether one of you conceals his speech or declares it openly; whether he lies hidden by night or walks forth freely by day. [Quran, 13: 10] Aishah, may Allah be pleased with her, said: Glory be to Allah whose hearing embraces all voices. The woman came to the Prophet, peace be upon him, with her plea. She had a grievance against her husband. I was in the corner of the house and did not hear what she said. Then Allah revealed: Allah has heard the plea of the woman who pleads with you . . . [An-Nasaa’i, Ibn Maajah]

1. Watch that tongue.
How many times have you watched your mouth when certain people were around, like your parents, a teacher, or your boss? As a Muslim one of your tasks is to guard your tongue, anytime, anywhere, and in any company.
Parents sin if they use inappropriately harsh or curse words while disciplining the children. As-Samee’ told us: Not a word does he (or she) utter, but there is a watcher by him ready (to record it). [Quran, 50:18] Use your tongue wisely so that your words will not be something that keep you from the gates of Jannah.

2. Study the etiquette of speech for a Muslim.
How do you know if your speech is pleasing to As-Samee’ if you do not study His book and the sunnah of the Prophet, peace and blessings be upon him? Learn about the prohibitions of the tongue, like backbiting, swearing, and lying. Study the types of speech As-Samee’ loves to hear from you, like dhikr, good advice, kind words to others, and reciting the Quran.

3. Ask As-Samee’ in salah.
Did you know you have seven places where you seek As-Samee’ with supplications in your prayer? You can do so after the first takbeer, and on some occasions before bowing, also while bowing, when you rise from bowing, during your prostrations, between the two prostrations, and at the very end of the prayer before you say your Salaam. Make use of these times to ask for whatever (halaal) you want in this life and the next.

4. Be comforted by As-Samee’.
When Allah ‘azza wa jall sent Musa and Harun to confront the Pharaoh, He comforted them with the words: Fear not. Indeed, I am with you (both); I hear and I see. [Quran, 20:46] As-Samee’ hears and answers your prayers, so invoke Him and supplicate to Him. Remember— dua’ is the weapon of the believer and can make the mountains shake.

5. Seek refuge in As-Samee’.
The Prophet Muhammad, salallahu ‘alayhi wa sallam, used to seek refuge with Allah from four things, including a prayer that goes unheard:
اللَّهُمَّ إِنِّي أَعُوذُ بِكَ مِنْ عِلْمٍ لَا يَنْفَعُ وَمِنْ قَلْبٍ لَا يَخْشَعُ وَمِنْ نَفْسٍ ‏لَا تَشْبَعُ ‏ ‏وَمِنْ دَعْوَةٍ لَا يُسْتَجَابُ لَهَا‏
O Allah, I seek refuge in You from knowledge which does not benefit, from a heart that does not entertain the fear (of Allah), from a soul that is not satisfied and the supplication that is not answered. [Muslim] The Prophet did not mean that he feared Allah would not hear the prayer itself, but rather that Allah would leave the prayer unanswered!

6. Ask As-Samee’ to bless your hearing.
Allah As-Samee’ loves those who use the abilities He gave them for His sake. Did Allah give you ears to listen to gossip or music? Did He give you a tongue so He could hear swearing and lying from you? Ask Him to help you to use your hearing and your tongue only for things pleasing to Him.

7. Pick the right words.
A true believer would never intentionally give reason to others to be doubtful, nor hurt their feelings in any way. You must ensure, as far as possible, that what you say is heard and understood by all involved; pick your words with wisdom.

O Allah, As-Samee’, we know You hear every sound and thought. Aid us to watch our tongues and use them for Your sake only, protect us from foul speech, bless our tongue and our hearing, and make us of those whose prayers are answered, ameen!

The Understand Quran Academy Team
PS: Did you already sign up for our newsletter? Sign up now and receive the free welcome gift to the series The Names of Allah!