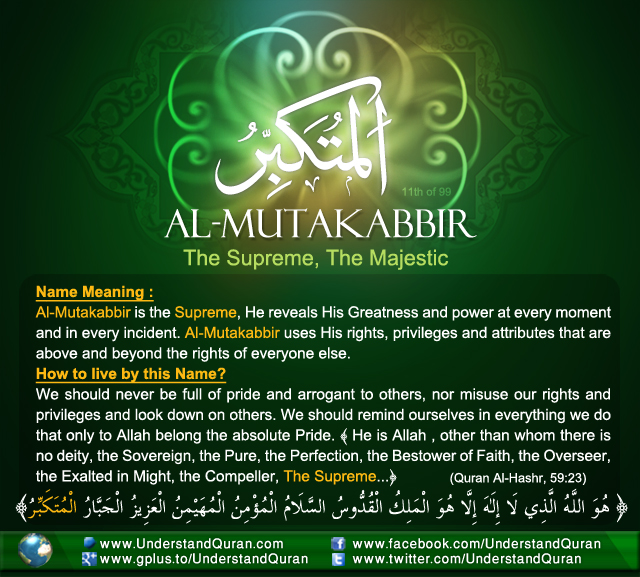 Allah calls Himself Al-Mutakabbir— The Supremely Great, The Perfection of Greatness— on one occasion in the Quran. He is the One who is supremely great. Al-Mutakabbir reveals His Greatness and power at every moment and in every incident!

The Supreme, The Possessor of All Rights, The Perfect Greatness

This root appears 161 times in the Quran in 18 derived forms. Examples of these forms are kabura (“hard”), yastakbiroona (“arrogant”), akbaru (“(is)greater”), and al-kibari (“the old age”).

Linguistically, kibriya means greatness and sovereignty, and it encompasses the meanings of the perfection of one’s self and existence; nobody can be described as such except Allah. Allahu Akbar– Allah is the Greatest— comes from the same root, as well as the name of Allah, Al-Kabeer. Al-Mutakabbir is the One who possesses all greatness, who is above having any of the qualities of His creatures, who cannot be harmed by the oppressors among His creation, and whose greatness and pride are the utmost.

Al-Mutakabbir Himself says: He is Allah , other than whom there is no deity, the Sovereign, the Pure, the Perfection, the Bestower of Faith, the Overseer, the Exalted in Might, the Compeller, the Superior. Exalted is Allah above whatever they associate with Him. [Quran, 59:23]

Allah Al-Mutakabbir versus the arrogant

Allah ‘azza wa jall describes people as mutakabbireen (arrogant) on multiple occasions in the Quran. They have arrogance in their hearts and actions towards Allah by disbelieving in His signs and they are arrogant to other people by looking down on them due to position, race, wealth, etc. The Prophet salallahu ‘alayhi wa sallam said: Allah is beautiful and loves beauty, arrogance is: rejecting the truth and looking down on people. [Muslim, At-Tirmidhee] Only Allah is al-Mutakabbir in a positive sense.

A lesson on how to battle pride

What is the opposite of kibr (arrogance)? It is humility, the adornment of a believer. Abu Hurayrah radiyallaahu ‘anhu narrated that the Prophet salallaahu ‘alayhi wa sallam said: . . . and no one will exercise humility for Allah’s sake, except that Allah will raise him up [Muslim] Urwah ibn Zubair radiyallaahu ‘anhu said: I saw Umar carrying a large leather water canteen on his shoulder. I said to him, ‘O Amir-ul-Mu’mineen, you shouldn’t be carrying that’. Umar replied by saying, A delegation came to Medina and I saw their obedience to me, and some ‘nakwah’ entered into my heart and I wanted to destroy it.
We all know of the strong personality of Umar radiyallaahu ‘anhu and yet when a small amount of pride (nakwah) entered into his heart, he hurried in an attempt to destroy it before it destroyed him.

1. Be great by being humble.
O you who believe, whoever of you should revert from his religion, Allah will bring forth a people He will love, and who will love Him, (who are) humble towards the believers, and powerful against the disbelievers . . . [Quran, 5:54] The greatest strength that you can attain is to have true reliance upon Allah ‘azza wa jall and to seek His support in hardship and ease. The highest level of greatness you can attain is to show humility (tawaada) to your Lord. Those who are well grounded in knowledge say: ‘We believe in it; it is all from our Lord.’ None will take heed except the people of understanding [Quran, 3:7]. Don’t only follow the ayaat or ahadeeth that suit you, but strive to apply the whole message to your daily life and dealings.

2. Respect others for the sake of Allah.
O you who have believed, let not a people ridicule [another] people; perhaps they may be better than them; nor let women ridicule [other] women; perhaps they may be better than them. [Quran, 49:11] Your knowledge of others is only by perception. Don’t mock or insult others as they might have a higher position with Al-Mutakabbir than yourself! Respect others, even though they may possess less beauty, knowledge, wealth, fame, or status or have a different skin colour. The Prophet salallaahu ‘alayhi wa sallam said: Whoever possesses an atom’s weight of kibr will not enter into the paradise [Muslim]. Abu Bakr radiyallaahu ‘anhu said: Let not any Muslim belittle another Muslim, for the lowest of the Muslims is great in the Sight of Allah.

3. Battle arrogance.
Allah ‘azza wa jall is the only true king and you are His slave— let’s not forget this. It’s easy to fall into arrogance (takabbur), thinking you know better and transgressing the limits set by Allah al-Mutakabbir. So keep checking your heart for feelings of arrogance creeping in and deal with them straight away by reminding yourself of the greatness of Allah. Al-Hasan al-Basri said: I wonder at the son of Adam! He uses his hand to wash himself from his waste once or twice a day, yet he seeks to compete with the All-Mighty? Don’t get carried away with your wealth or achievements, know it is from Al-Mutakabbir and not from yourself. The way to avoid arrogance is to remember Allah as much as we can until it becomes a habit to instantly thank Him for any good that comes our way, so increase in saying alhamdulillah!

4. Be humble to increase your knowledge
Abdullah ibn Mu’tazz radiyallahu ‘anhu said: The humble student is the one who gets the most knowledge, just as the lowest places on earth collect the most water. So always be humble towards your teachers and invoke Allah for them.

5. Ask al-Mutakabbir.
Every day ask Allah al-Mutakabbir to save you and protect you from the evil of pride and arrogance.

O Allah, Al-Mutakabbir, we know that You are supremely Great. Guide our hearts and actions to humility towards You, our Deen and Your creation. Protect us from arrogance and assist us to ways to cure any arrogance that entered our hearts. Make us of those who are blessed to witness Your Grandeur in Paradise, ameen!