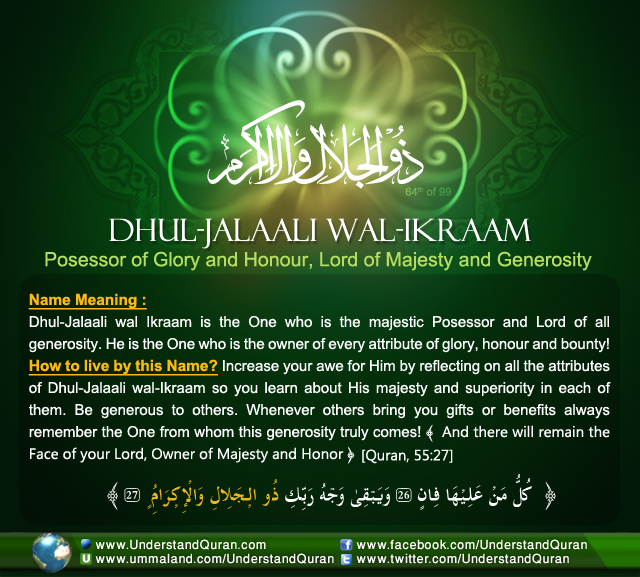 Allah calls Himself Dhul-Jalaali wal-Ikraam—The Possessor of Glory and Honour, The Lord of Majesty and Generosity — on two occasions in the Quran. He is the one who owns each attribute and manner of glory, majesty, superiority, generosity, and honour. Dhul-Jalaali wal-Ikraam is the source of great splendour and abundance!

The Owner of Loftiness and Majesty, The Lord of Generosity and Nobility

Jalaal comes from the root jeem-laam-laam, which points out to three main meanings. The first main meaning is to be glorious, majestic and sublime. The second main meaning is to be high, lofty and independant and the third to be supremely great.
This root appears twice in the Quran in one form; as the noun jalaal. An example is al-jalaali (of Majesty).

Ikraam, kareem and akram come from the root kaaf-raa-meem, which points out to four main meanings. The first meaning is to be generous, giving, and beneficent. The second main meaning of this root is to be highly esteemed, honoured and valued. The third main meaning is to be precious, valuable and rare and the fourth to be bountiful and productive. This root appears 47 times in the Quran in eight derived forms. Examples of these forms are al-akram (“the Most Generous”), kareemun (“noble”), kiraaman (“dignified ones”) and al-ikraam (“and Honor ”).

Linguistically, dhu or thoo is a demonstrative pronoun and literally means with, in, on, or of in the Arabic language. In Dhul-Jalaal dhu refers to Allah ‘azza wa jall being complete Possessor, Owner and Lord of al-Jalaal, Majesty and Glory. Wal-Ikraam means wa (and) al-Ikraam, the Generosity and Bounty. Kareem is an adjective while ikraam is a verbal noun.

Allah is the Lord of these two beautiful Attributes. Dhul-Jalaali wal-Ikraam is the One who is most precious and honoured, He is the Majestic and Glorious Lord, Owner and Source of all generosity, blessings and bounties!

Dhul-Jalaali wal-Ikraam Himself says: Blessed is the name of your Lord, Owner of Majesty and Honor [Quran, 55:78]

The Honourable Face of Allah

In Surah Ar-Rahmaan Allah ‘azza wa jall tells us about the moment everything and everyone on earth will perish and only His honourable Face will remain, because He is the Ever-Living and will never die. Allah ‘azza wajall describes His Face here as being Dhul-Jalaali wal-Ikraam. Ash-Sha`bi said, “When you have recited, Whatsoever is on it (the earth) will perish.) do not stop, continue reading,And there will remain the Face of your Lord, Owner of Majesty and Honor.”[Quran, 57:24-25] Ibn `Abbas commented on the meaning of Dhul-Jalaali wal-Ikraam, by saying, “Owner of greatness and pride.” Both of these statements can be found in tafseer Ibn Katheer.

Allah ‘azza wa jall describes His Noble Face as being Dhul-Jalaali wal-Ikraam; only He is worthy of being revered and obeyed. Make it a mission to seek His Face in everything you do. And keep yourself patiently with those who call on their Lord morning and afternoon, seeking His Face [Quran, 18:28] That means for example that if you do something for someone else or give someone something, you don’t do it for their praise or recognition, but only to please Allah. As He said about those giving charity: We feed you seeking Allah’s Face only [Quran, 76:9] You can test yourself by seeing how you feel when someone doesn’t show gratefulness or doesn’t recognize what you did for them: do you feel angry and upset? Then you might have to remind yourself to do it for His Face only  He records each deed, no matter if people thank you or not.

2. Remember Dhul-Jalaali wal-Ikraam after each prayer.
Follow a sunnah and get rewarded immensely by using below dhikr after salah. A’ishah radiyallahu ‘anhaa said, “When the Messenger of Allah would (say the) Salam (completing prayer), he would only sit as long as it takes him to say,

3. Be generous.
Let Allah ‘azza wa jall being  the Lord of generosity be an inspiration for you to be kareem (generous) to others as the Prophet salallahu ‘alayhi wa sallam said: The generous one is close to Allah, close to people, far from the fire… [At-Tirmidhee]

4. Recognize the Source.
When you receive gifts from people or someone benefits you by giving support or help, know that the Source of these bounties is Dhul-Jalaali wal-Ikraam. So when a gift or benefit arrives to you, make sure the first thing you do is saying ‘alhamdulillah’ and honour the true Giver from whom all blessings come. Then, thank the person for example by supplicating for them by saying  jazaakAllahu khayr (may Allah reward you with good) or baraakAllahu feek (may Allah bless you).

O Allah, Dhul-Jalaali wal-Ikram, we know that You are the Lord of all majesty and bounty. Aid us to seek Your Honourable Face only in our intentions, words and deeds. Help us to put obedience to You above everything else in our daily life and make us generous to others. Bless us with being able to see Your Countenance in the Hereafter,  ameen!

*To read about  how to live by the Beautiful Name Al-Kareem, click here.