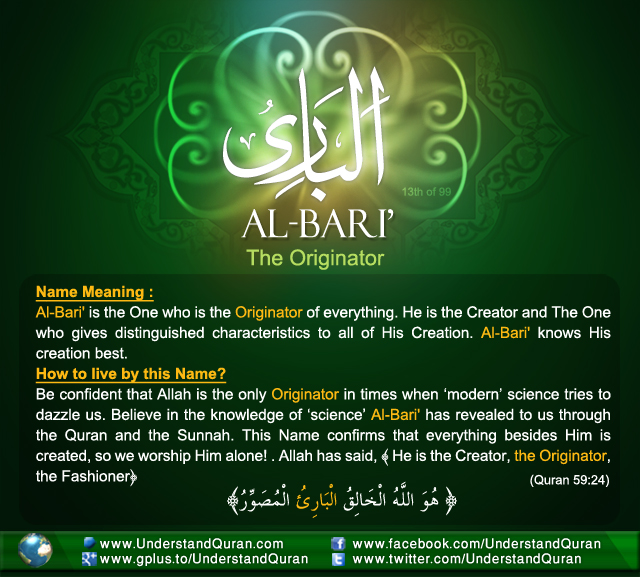 Allah calls Himself Al-Baari’ — The Originator, The Maker, The Evolver— on three ocassions in the Quran. He is the One who creates form out of nothing. Al-Baari’ creates with no model or similarity and evolves that which is in perfect proportion and harmony without any fault!

The Originator, The Producer, The Inventor

Baari’ comes from the root baa-raa-hamza which points to three main meanings. The first main meaning is to create and to form out of nothing and the second is to evolve, using pre-existing matter. The third main meaning is to be individual and free and clear from another, and from fault and blemish.

This root appears 31 times in the Quran in 10 derived forms. Examples of these forms are tabarra’a (“will disown”), baraa’atun (“is an exemption”), baree’un (“free”), and al-bariyyati (“(of) the creatures”).

Linguistically, scholars mentioned two concepts related to the root ba-ra-‘a: bari’a, which means to be free from or distant from something and baree’a, which means creation. In the context of Allah ‘azza wajal Al-Baari’means He is the Creator, the Originator, the Inventor who distinguished all creatures from each other by their detailed characteristics!

The fly in the Quran
Allah al-Baari’ makes a parable: O mankind! Here is an example for your understanding, so listen to it carefully. Those deities whom you call besides Allah, cannot create a single fly, even if they all combined their forces, rather, if a fly snatches away anything from them they cannot even get it back; how feebleminded are the suppliants and how powerless are those whom they supplicate! [Quran, 22:73]
Allah ‘azza wa jall revealed specific knowledge to the Prophet salalaahu ‘alayhi wa sallam, for example in the field of science, and the believers must be certain this is truth. In this ayah Allah al-Baari’ is challenging anybody, including modern-day scientists, to make a fly and they are not able to. A fly is a complete living being with a tiny yet comprehensive flight management, guidance, and surveillance system without turbines or propellers— a marvellous nano-technological design.

1. Have firm confidence in al-Baari’.
Let this divine attribute of Allah ‘azza wa jall restore your confidence in times when modern science tries to divert you away from belief in a Creator. A Bedouin who lived in the desert and who expressed it most eloquently, when he was asked, How do you know your Lord? He said: If you see the camel dung you know that a camel has passed this way, and if you see a footstep you know that a person has passed this way, so the heaven with its stars and the earth with its mountain passes and the oceans with their high waves all point to the existence of the All-Hearing, All-Seeing. Let this inspire you in yaqeen (certainty) and faith.

2. Disassociate yourself from the bad.
Distance yourself (baraa’a) from the haraam and those who do bad, are corrupt, or cause mischief. But don’t stop there, distance yourself from bad first, then enjoin good and forbid evil. As a believer you should always be pro-active and strive for ehsaan (excellence) in whatever you do in society. Al-Baari’ said: Let there arise out of you a group of people inviting to all that is good (Islâm), enjoining Al-Ma’rûf (i.e. Islâmic Monotheism and all that Islam orders one to do) and forbidding Al-Munkar (polytheism and disbelief and all that Islam has forbidden). And it is they who are the successful. [Quran, 3:104].

3. Know that everything besides Him is created.
The Messenger of Allah salallaahu ‘alayhi wa sallam said: There is no obedience to the creation, in disobedience to the Creator. Obedience is only in what is good. [al-Bukharee] Be very honest with yourself and look at how many occasions in your life you’ve actually tried to please the creation instead of pleasing al-Baari’. Then renew your intention (niyaa) to strive for the pleasure of Him only.

4. Ponder the creation of al-Baari’.
Look at the morning or evening sun, at tiny insects, flies, plants, and flowers. Study science and do so with the intention of pondering His creation. Also seek cure in the places Al-Baari’ revealed to His Prophet, for example by studying the book: Medicine of the Prophet by Ibn Qayyim al Jawziyah.

5. Spread the message.
Use your knowledge of this powerful name to give da’wah to those who do not believe in their Creator. Ayah 73 in Surah al-Hajj is an amazing example for you to use! The Messenger of Allah salallahu ‘alayhi wa sallam said to ‘Ali radiyallahu ‘anhu: If Allah guides a person through you, it is better for you than all that is on the earth. [Al-Bukharee, Muslim] Let this motivate you to daily carry out an act of dawah, from showing good manners to conveying even one ayah, as the smallest deeds can be part of Allah’s guidance of someone to Islam.

O Allah, Al-Baari’,we know that You create and form from nothing. Make us confident in our belief in You as the Originator of everything and let us worship you alone; guide us to obey You, distance ourselves from bad, enjoin good, and forbid evil. Help us ponder Your creations and appreciate Your power and greatness and give thanks to You, and maks us of those who carry the da’wah of Your Oneness to others in the best way, ameen!

*Inspired by the Names of Allah Series relayed on Al-Huda television by Dr Bilal Philips.