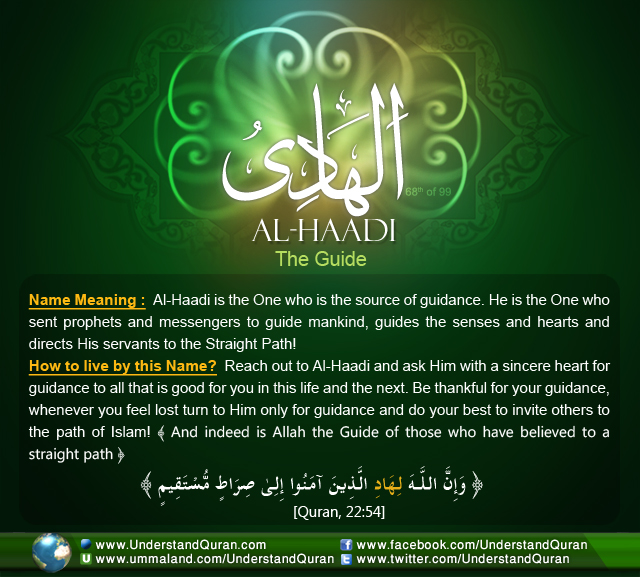 Allah calls Himself Al-Haadi— The Guide— on two occasions in the Quran. He is the one who gives perfect guidance. Al-Haadi is the one by whom His believers are guided and by whose general guidance all creatures are guided to what is beneficial for them!

The One who guides, The Guide of the right path

This root appears 316 times in the Quran in twelve derived forms.  Examples of these forms are al-hudaa (the guidance), yahdee (guide), hadiyyatin (gift), al-hadyi (sacrificial animal), and al-muhtadeen (the guided ones).

Linguistically, hadaa is the verb which means to guide, and hidaayah doesn’t just mean guidance; it also refers to guiding in a gentle and kind way. Referring to Allah ‘azza wa jall, He is the only true guide by whom the creatures are guided. Al-Haadi created signs in the universe to guide us, such as the stars and the moon, as well as the spiritual guidance of hearts to the truth and the physical guidance of the senses we use to detect harm.

Al-Haadi Himself says: And indeed is Allah the Guide of those who have believed to a straight path [Quran, 22:54] … And thus have We made for every prophet an enemy from among the criminals. But sufficient is your Lord as a guide and a helper. [Quran, 25:31]

Scholars divide the guidance of Allah ‘azza wa jall into four different types. The first is hidaayat-al-a’mmah  or general guidance, which is in place for the whole creation including plants, minerals, animals, etcetera;  all are guided by Al-Haadi in the best manner for them.  An example are the bees and how they work, the migrating of birds, the suckling of a newborn, the working of the senses. He said, Our Lord is He who gave each thing its form and then guided [it]. [Quran, 20:50]

The second type is described as hidaayat-al-Jinn-wal-Ins; it is guidance for the jinn and mankind defining the paths of good and evil, through the prophets and messengers sent by Allah ‘azza wa jall. And indeed, [O Muhammad], you guide to a straight path. [Quran, 42:52]

The third type of hidaayah is by tawfeeq (ability) and inspiration (or ilham). An example is when you are guided through a hardship and you display strong trust and belief in Al-Haadi: No disaster strikes except by permission of Allah. And whoever believes in Allah– He will guide his heart . . . [Quran, 64:11] Then there are those incidents when you end up at the right place, hearing something you just needed to hear or meeting someone just at the right moment, all as forms of guidance of Allah.

And the forth type is guidance to success in the Hereafter for the righteous believers: And We will have removed whatever is within their breasts of resentment, [while] flowing beneath them are rivers. And they will say, Praise to Allah, who has guided us to this. [Quran 7:43]

1. Keep asking for guidance.
If you seek the truth sincerely, Al-Haadi will guide you to it. As a believer, you say, a minimum of seventeen times a day when you pray:  ihdinas siraatal mustaqeem– guide us on the straight path. Why, while you are already guided to Islam, should you keep asking for guidance? Because there are different levels of guidance for you to attain to be truly guided and because you are in need of continuous hidaayah; realize no one is safe from misguidance.

2. Feel it when you say ihdinas siraatal mustaqeem.
These are levels of true guidance: guidance of knowledge to know the truth, the capacity to be guided, to desire to be guided, to act upon it, and to remain steadfast in it. For all obstructions that impede guidance to be removed and to be granted sight of your ultimate goal along the path. For you to be aware of your own desperate need for guidance from Allah ‘azza wa jall over any other necessities and to make you see the misguided paths [ summarized from Ibn al Qayyim al Jawziyyah] So next time you say ‘Guide us on the straight path’, say it with feelings, sincerely asking to attain all levels of guidance from Allah.

3. Seek guidance from Al-Haadi in each matter.
Whenever you feel lost, stuck or when you have to make a decision, turn to Allah ‘azza wa jall before turning to others. Asking for guidance, you can use this beautiful name, e.g. by starting your invocation with Yaa Haadi. Whatever guidance someone or something might give you, know that it truly comes from Al-Haadi. A means to seek hidaayah is to pray the sunnah istakhaarah prayer.

4. Be thankful and do good to increase your guidance.
In Paradise you will say: . . . and we would never have been guided if Allah had not guided us. [Quran, 7:43] Reflect how hidaayah (guidance) is the best hadiyyah (gift) you can ever get, so thank Allah ‘azza wa jall for it each day. Indeed, We guided him to the way, be he grateful or be he ungrateful. [Quran, 76:3]

Another benefit of thanking Him for guidance is that He will give you more: . . . If you are grateful, I will surely increase you [in favor]. [Quran, 14:7] Also, your good deeds are directly linked to your guidance, so the more good deeds you do, the more Al-Haadi will increase your guidance: And Allah increases those who were guided, in guidance, and the enduring good deeds are better to your Lord for reward and better for recourse. [Quran, 19:76]

5. Invite others to the right path.
Invite others to the straight path, first and foremost by showing  exemplary behaviour yourself.  However, know that true guidance is from Al-Haadi. This should increase you in your confidence in calling others to Islam, as you know that the results are not dependant on your da’wah or speech but are in the hands of Al-Haadi; so don’t get disheartened or arrogant:  Indeed, [O Muhammad], you do not guide whom you like, but Allah guides whom He wills . . . [Quran, 28:56]

O Allah, Al-Haadi, we know that You are the ultimate Guide. Guide us on the straight path and make us of those who keep asking sincerely for your guidance in every matter. Inspire us to be aware and thankful for Your Guidance and aware of those who desire it. Aid us in inviting others to Islam and bless us with the ultimate guidance we need to enter Your Paradise, ameen!