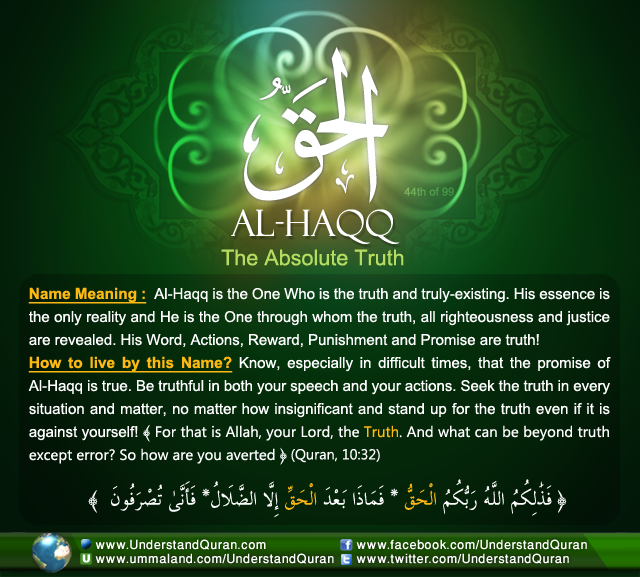 Allah calls Himself Al-Haqq— The Absolute Truth, The Reality— on nine occasions in the Quran. Al-Haqq is true in and of Himself and in His attributes; His existence is undeniable and nothing else can exist except through Him. His words are truth; the meeting with Him is truth; His Messengers are truth; His Books are truth; His religion is the Truth; the worship of Him Alone, with no partners or associates, is the Truth; everything that has to do with Him is truth! [Tayseer al-Kareem al-Rahmaan fi Tafseer Kalaam al-Mannaan, Shaykh ‘Abd al-Rahmaan al-Sa’di]

The Truth, the Reality, the Just and Correct

This root appears 287  times in the Quran in seven derived forms. Examples of these forms include haqqa (“proved true”), ahaqqu  (“more right”), al haqq (“the truth”) and al haqqatu (“the inevitable reality”).

The truth is a value, whereas justice means the truth being put into action. Haqq refers to the One He acts in accord with the needs of every situation. He cannot but exist and His essence is unavoidable, every truth comes from Al-Haqq!

A Surah of Reality

Suratul Haaqqa (The inevitable reality,surah 69) evolves around many concepts of al haqq (the truth). The first section tells us the coming of the Resurrection and the occurrence of the Hereafter is a truth which has to take place inevitably. Then the faith of the communities who denied the truth is discussed. Then Allah, Al-Haqq, tells us that all men shall appear in the Court of their Lord, where no secret will stay hidden and the truth about every single person will prevail. Allah ‘azza wajal tells us that the people who worked for the truth will be blessed with the eternal bliss of Paradise, while those who didn’t recognize the rights of Allah and denied the truth, will be cast into Hell. Then the ultimate Word of truth is described, the Quran, brought through the true and last Messenger, the Prophet Muhammad salallahu ‘alayhi wa sallam. And Allah, Al-Haqq ends with saying the Quran is the Truth and is absolute and pure: and for those who deny it, it will be a source of deep regret.
These very ayaat entered deep into the heart of Umar al Khattaab radiyallahu anhu, even though he was not Muslim yet!

1.    Be truthful.
Being truthful doesn’t just mean speaking the truth, it also means seeking honesty in all your actions. It means you can never hide the truth and you should abide by the truth, even if it is against your personal interests.  Al Haqq Himself instructs us:  And do not mix the truth with falsehood or conceal the truth while you know [it]. [Quran, 2:42] The Prophet salallahu ‘alayhi wa sallam, who was knows as as-Sadeeq al-Ameen, the truthful and trustworthy, is our true example!

2. Advise others to speak the truth.
Speaking the truth and always being honest in your dealings with others doesn’t end just there, Allah ‘azza wajal gives us a golden advice in Suratul ‘Asr: Except for those who have believed and done righteous deeds and advised each other to truth and advised each other to patience. [Quran, 103:3] How many of us think about ourselves, but are not strong or committed enough to inspire others to seek and stand up for the truth? Do you sometimes hold back a truthful advice because you don’t want to ‘hurt’ someone’s feelings? Think a step further, a know that a truthful advice given in a wise way is the right of your fellow Muslim brother or sister!

3.Recall His promise in times of hardship.
Knowing the promise of Al-Haqq is true and firmly believing in this is an amazing comfort for the troubled heart. Whereas standing up for the truth may bring hardship, the promise of ease is true; verily, with hardship there is ease [Surah ash-Sharh]
Remain steadfast by knowing the reward of Al-Haqq is just and true. They tried to tempt the Prophet salallahu ‘alayhi wa sallam with power, but he stood by the truth and he conquered Mekkah 23 years after he was forced to leave it.

4. Ask Al-Haqq.
It is not sufficient to just recognize the truth, it is necessary you act upon it. The same goes for evil, you can not just recognize evil, you must refrain from it. For a believer knowledge comes with action. Reflect upon this beautiful dua:

Al-Haqq tells us: And Satan will say when the matter has been concluded, “Indeed, Allah had promised you the promise of truth. And I promised you, but I betrayed you. But I had no authority over you except that I invited you, and you responded to me. So do not blame me; but blame yourselves. I cannot be called to your aid, nor can you be called to my aid. Indeed, I deny your association of me [with Allah ] before. Indeed, for the wrongdoers is a painful punishment. [Quran, 14:22]

O Allah, Al-Haqq, we know that You are the ultimate Truth.  Guide us to live by and die upon  the truth and make make us of those who advice others to the truth. Don’t let us be deceived by shaytan and his helpers. Make us reflect upon the universe and ourselves and witness the reality of Paradise, ameen!