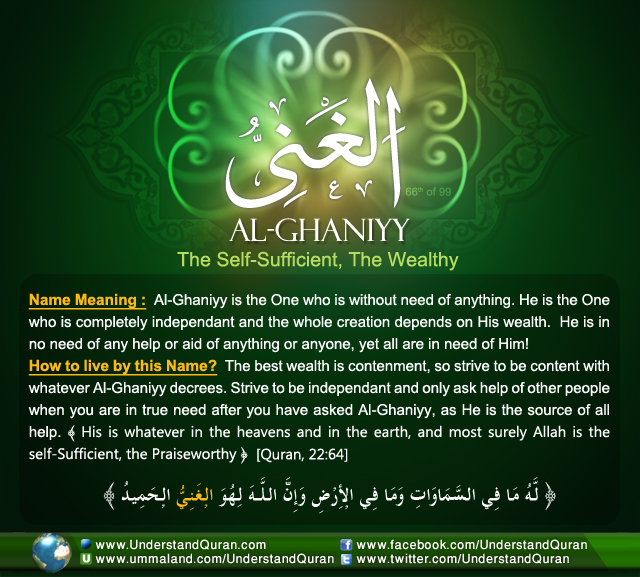 Allah calls Himself Al-Ghaniyy—The Self-Sufficient, The Independent— on eighteen occasions in the Quran. He is the one without need of anything. Al-Ghaniyy is self-sufficient, free of any dependence, and rich— while all of His creatures stand in need of Him!

The Independent, The Wealthy, Self-Sufficient

This root appears 73 times in the Quran in five derived forms.  Examples of these forms are aghnaa (availed), yughnee (benefits, avail)  and istaghnaa (considers himself self-sufficient).

Linguistically, ghina is used to refer to the concept of independence because of being self-sufficient. The opposite is faqr, which refers to poverty, being in need. Faqeer is used to describe a poor person. In reality no one is in absence of need of Allah ‘azza wa jall and everyone is dependent on no one other than Him. Therefore Al-Ghaniyy is the only One who truly transcends all needs, is completely satisfied, and the One upon whose wealth, riches, and blessings all others depend!

In the Quran, Allah ‘azza wa jall combines His name Al-Ghaniyy ten times with His name Al-Hameed (The Praiseworthy). For example, the believers are instructed to spend of their wealth in charity, however Allah ‘azza wa jall is far Richer from needing their charity, but the purpose is that the distance between the rich and the poor becomes less. [Tafseer ibn Katheer]

Of whatever is given, it is the piety behind it that will reach Al-Ghaniyy, as He reveals: It is neither their meat nor their blood that reaches Allah, but it is piety from you that reaches Him. [Quran, 22:37]. Whenever a believer gives in charity with a sincere intention, he should know that Allah is the Most Rich and He will reward him for his charity and multiply it many times. And complete praise and thanks is to Him, as no one can do Him a favour, for everything is His own creation and invention!

1. Don’t let wealth distract you.
No matter how wealthy you are, good-looking or of good career, remind yourself Who is the real owner of everything.O mankind! You are the poor ones in need of Allah, where as Allah is the Rich Beyond Need , the Praiseworthy. [Quran, 35:15] So use your money, power and position to please Him only.

2. Thank Al-Ghaniyy.
Whenever anything of wealth comes your way, for example a promotion through work, a financial gain, or anything of benefit to you, make sure the first thing you do is to thank Al-Ghaniyy and to ask Him to aid you to use it wisely and make it a source of barakah (blessings) for you. Musa said: If you were to be ungrateful, you and everyone on Earth, Allah is Rich Beyond Need, Praiseworthy. [Quran, 14:8]

3. Be content.
The Prophet salallahu ‘alayhi wa sallam said: Richness is not having many possessions. Rather, true richness is the richness of the soul. [Al-Bukhaaree] Remind yourself that the highest degree of wealth is contentment with the decree of Allah ‘azza wa jall. Strive for ridaa, which means you are satisfied with whatever Al-Ghaniyy gives you or withholds from you as this is the ultimate key to the tranquility of your soul.

4. Don’t beg or ask from others when there is no need.
The Prophet salallahu ‘alayhi wa sallam said: It is better for anyone of you to take a rope and bring a bundle of wood over his back and sell it, and Allah will save his face because of that, rather than to ask the people who may or may not give. [Al-Bukhaaree] As a Muslim you should strive to not burden other Muslims or be lazy and inactive.

You should never ask from others just to increase your wealth. The Prophet salallahu ‘alayhi wa sallam warned: Whoever begs from the people in order to accumulate wealth, it is as if he is asking for a live coal, so let him ask for a little or a lot. [Muslim] The Prophet mentioned three cases in which it is allowed to ask the help of others: in case of repaying debts, when a calamity has stricken and all your wealth is destroyed or when one is stricken with poverty and three trust-worthy persons can testify for this. [Muslim]


5. Ask Al-Ghaniyy.
Use the beautiful and comprehensive supplication of Musa ‘alayhi sallam while realizing your need of Al-Ghaniyy:
رَبِّإِنِّيلِمَاأَنزَلْتَإِلَيَّمِنْخَيْرٍفَقِيرٌ(28:24)
My Lord! Truly, I am in need of whatever good that You bestow on me! [Quran, 28:24]

6. Give of what you love.
When you give charity there are two very important instructions: only give from halaal wealth or belongings and don’t give what you would dislike for yourself. Ibn ‘Abbas radiayallahu ‘anhu mentioned as reported in tafseer Ibn Katheer:  Allah commanded them  to spend from the purest, finest and best types of their money and prohibited spending from evil and dishonest money, because Allah is pure and good and only accepts that which is pure and Verily, Allah is far Richer than you, He is in no need of this money, so do not give, for His sake, what you would dislike for yourselves.

Giving of what you love is something lost in our modern day, individualistic society. How many times do we give away old, even broken clothes in charity? Al-Ghaniyy knows you best. Reflect on this crucial statement:  By no means shall you attain Al-Birr, unless you spend of that which you love [Quran, 4:92] So give away something you love yourself and you will feel the effect on your heart!

O Allah, Al-Ghaniyy, we know that You need none and all need you. Make us recognize our poverty in front of You and always make us thankful for the wealth You bestow on us and aid us to use it for Your sake. Adorn us with contentment with Your decree and make us of those who give away of what they love, ameen!