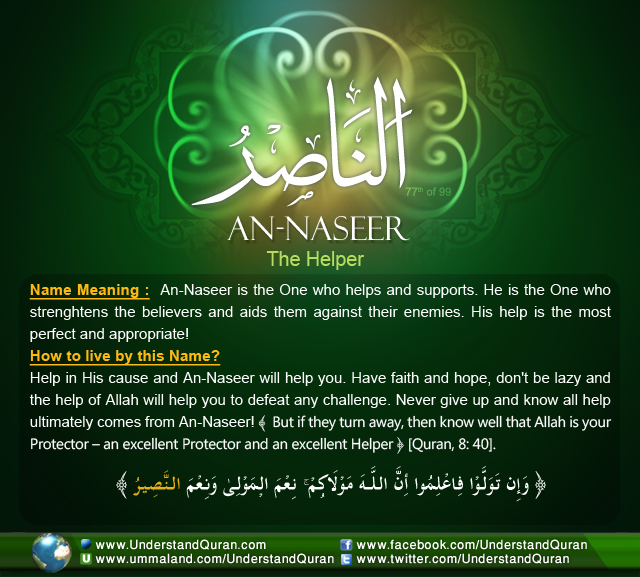 Allah calls Himself An-Naseer— The Helper— on five occasions in the Quran. An-Naseer is the one who helps and supports His slaves. He is the One who backs, strengthens, defends, and aids the believers, and there is no helper but Him!

The Helper, the One who supports and defends

This root appears 158 times in the Quran in 10 derived forms. Examples of these forms are yansuru (“He helps”), yantasiroona (“help or defend themselves”), al nasru (“the victory”), nasaaraa (“Christians”) and naasireena (“helpers).

Linguistically, there are different words used in the Quran referring to kinds of help. Examples are ista’anah (linked to Allah’s beautiful Name Al-Musta’aan) which means all sorts of help, ayada, az’ara, madda etcetera. The noun nasr includes help against an oppressor and help when wanting to overpower someone else.
Nasrullaah is the help of Allah ‘azza wa jall which cannot be equalled to any other kind of help.  Allah is An-Naseer, He is the ultimate Helper, Supporter and Defender of His believing slaves.

An-Naseer says: But Allah is your protector, and He is the best of helpers [Quran, 3:150] The help or victory (nasr) of Allah ‘azza wa jall is of different types described by the scholars.

One type is the victory that is deserved; it comes with a price, which is faith and preparation. For example the victory of worthiness of the sahaabah at the battle of Badr. This is the type of victory for the believer who obeys Allah ‘azza wa jall and wins.

The second type is a victory that is not deserved by the faith and obedient behaviour of a certain group, but Allah ‘azza wa jall decrees victory for them according to His wisdom in that situation.

The third type is the principal victory, which might not be seen as victory by others, but in reality indicates the true victory of a human being. An example are the believers in the story of the Ditch described in surah Al-Burooj, who were killed in masses. And the hairdresser of the daughter Fir’awn of whom her children and herself were thrown in boiling oil. How did they win? They stood by their belief in Allah ‘azza wa jall and principles and gained the ultimate victory: the pleasure and reward of An-Naseer for the martyrs with the highest Paradise.

An-Naseer says: If Allah should aid you, no one can overcome you; but if He should forsake you, who is there that can aid you after Him? And upon Allah let the believers rely [Quran, 3:160]. Help in Allah’s cause by defending Islam, spread the message of the Quran and standing by your Islamic principle. Teach the children to stand up for the truth by showing them the correct role models and hero’s of Islam, both contemporary and from the past. The Muslim nation is in need of those who stick to the principles of Islam. So get close to the Quran and inspire others to, use it as a guidance in your actions and the help of Allah will come. O you who believe! If you help (in the cause of) Allah, He will help you, and make your foothold firm [Quran, 47:7]

2. Help your brothers and sisters.
As part of a hadith recorded by Muslim, the Prophet salallahu ‘alayhi wa sallam said: …Allah is helping the servant as long as the servant is helping his brother. The point is to look out actively where you can help your brothers and sisters so you will get the help of An-Naseer in return. Sometimes you can help someone financially by paying their debts, spiritually by giving them emotional support and advice or even by your reputation or authority. Use all the means An-Naseer gave you to help those in need!

3. Don’t be lazy. Sometimes people get frustrated and imagine that Allah will not help them. Never mistrust Allah and His help! To deserve the help from An-Naseer you must strongly believe in Him and His attributes. Take your inspiration from Musa ‘alayhi sallam: And when the two companies saw one another, the companions of Moses said, “Indeed, we are to be overtaken!

[Moses] said, No! Indeed, with me is my Lord; He will guide me [Quran, 26:61-62] But don’t just have faith alone without action. You need to prepare as well; don’t be lazy and expect the support of Allah to come! So think well of Allah, believe in Him and do whatever you can in taking pre-cautions.

4. Know help comes from Allah alone. Never think you were helped in a certain situation, just because you made the right decision or because you were so skilful. Don’t say “I did this and succeeded”, rather say “Allah is my Helper and all success comes from Him alone”!
A subtle way An-Naseer helps you is when He fills your heart with happiness and security when you make a right decision and He fills it with anxiety and pessimism when you make a wrong decision. So recognize the help of Allah in your life and be grateful.

5. Live by Surah An-Nasr. Surah An-Nasr [Quran 110] or the Victory, teaches you many lessons: apply them! This surah indicates the successfull spread of Islam, the near-approaching death of the Prophet and describes etiquettes to observe after gaining victory after going through lots of struggles. Instead of being arrogant, you should praise Allah, thank Him and seek His forgiveness.  So next time you gain something or succeed after a challenge; say subhanAllah, alhamdulillah and astaghfirullah from the heart!6. Call on An-Naseer.

How many times are people diagnosed with fatal diseases, doctors pronounce no hope and they are completely healed by the help of Allah? Call for the help of An-Naseer alone – even though He mght send His help through other people or even objects –  and He can help you defeat any disease, enemy or any struggle you are dealing with, mentally, psychically or materially!

To read about some of the beautiful Names that are related in meaning to An-Naseer and how to live by them as well click below.
Al Mawlaa
Al Waliy
Al Musta’aan

O Allah, An-Naseer we know that You are the only Helper. Make us of those who aid Your cause and help our brothers and sisters so we receive Your help in return. Make us strong in our belief in Your help and active in seeking it and make us realize You are the only source of help and be grateful for it. Grant us victory and success in this life and most importantly the ultimate victory of Jannatul Firdaws, ameen!