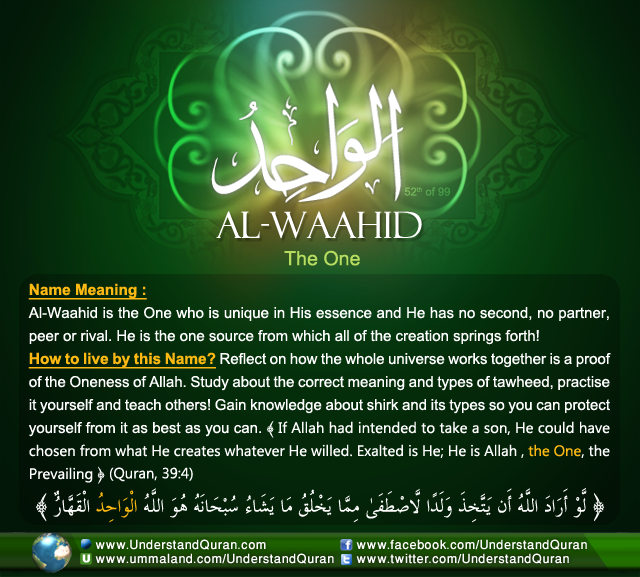 The One, Apart From Others

Waahid comes from the root waw-haa-daal, which points to four main meanings. The first meaning is to be one, to be made one and to be called one. The second main meaning is to connect, join and unite. The third is to be unique and singular and the fourth is to be one apart from others.
This root appears 68 times in the Quran in four derived forms. Examples of these forms are waahidan(“one”),  waahidatan (“single”) and wahdahu (“alone”).

Linguistically waahid means one who is one, or alone, apart from others. Tawheed also comes from this root and it means unification or asserting oneness.
Tawheedullaah means to belief that Allah is One without partner in His dominion and His actions (Ruboobiyyah), One without similitude in His essence and attributes (Asmaa wa Sifaat), and One without rival in His divinity and in worship (Uloohiyyah/Uboodiyyah). Disregarding one of these aspects of Tawheed is shirk (literally sharing); the association of partners with Allah. Being One is a quality of Allah ‘azza wajal wich nobody else shares with Him. He is the One and Only in His being, authority, actions and powers!

Allah ‘azza wajal chose His Name Al-Waahid to be paired with His Name Al-Qahhaar on each occasion in the Quran!
This Beautiful Name illustrates that He has the supreme authority and ultimate power to do anything. Al-Qahhaar can subdue anyone to compel him or her to His will and He does so with perfect knowledge and justice and this great ability belongs to Him only. All that is in the heavens and the earth submits, willingly or unwillingly, to Al-Waahid alone!

1.   Remind yourself and others of His Oneness.
The Oneness of Allah is a principle you need to keep reminding yourself of. His Oneness is the core message all the Prophets, peace be upon them all, were sent with! If you truly understand Al-Waahid, you will worship Him accordingly. Remind yourself He is the Only One able to do everything, so in your daily life, make dua only to Him, sacrifice only for Him and give sadaqah only for Him. Study tawheed and its meanings and teach this Name to your children and others!

2.   Turn to Him first. We know we have to believe in Al-Waahid alone, but in daily life when difficulty hits us we often turn to other means to try to relieve ourselves. When you have a problem turn to Him turn to Him first and then to other means to your disposal. When you are ill, don’t just grab a medicine quickly, but first ask Al-Waahid to provide you cure. When you are hurt, don’t immediately vent your heartache to a friend, ask Al-Waahid to mend your heart first. Why turn to anyone else if you can turn to The Sustainer of the Heavens and the earth?

3.   See Al-Waahid’s proof all around you.
The integration of the whole universe is a proof for the Oneness of Allah. The orbit of the sun and the moon, the composition of the air, the earth, the sees and the planets, the birth of a child, the perfect works of the human body are all proofs that there is only One Creator Who is the source of all of these diverse manifestations of His Unity. So look around you to increase your awe for His Beautiful Oneness!

4.   Trust in Al-Waahid.
Tawheed means you recognize He alone manages the affairs of the creation.  Nothing or no one else creates, sustains, grants, withholds, brings back to life, causes death, nor manages the affairs of every single person, nor sees their innermost feelings, except Al-Waahid. So put your trust in Him and know that only He will deal with you with perfect wisdom and justice at all times!

5.    Learn how to protect yourself from shirk.
Gain knowledge about shirk and its types so you can protect yourself from it as best as you can. Al-Waahid says: Surely Allah does not forgive that anything should be associated with Him, and forgives what is besides that to whomsoever He pleases; and whoever associates anything with Allah, he devises indeed a great sin. [Quran, 4:48] This shows you beautifully that Al-Waahid forgives all sins, except shirk. However, repentance wipes out each and every sin, even an act of shirk!  The Prophet salallahu ‘alayhi wa sallam taught you this comprehensive supplication regarding shirk:

Allaahumma innee ‘aoothu bika an ushrika bika shaiann wa anaa a’lamu, wa astaghfiruka limaa laa a’lamu.
O Allah, I seek refuge in You lest I associate anything with You knowingly, and I seek Your forgiveness for what I know not [Ahmad] Memorize it and ask Al-Waahid with it each day!

O Allah, Al-Waahid we know that You are the One and Only.  Grant us  correct and unshakable belief in Your Oneness, allow us to truly understand and appreciate this Beautiful Name, act upon it and spread the message of Your Oneness to others. Make us reflect your Creation and protect and forgive us from all types of shirk, ameen!