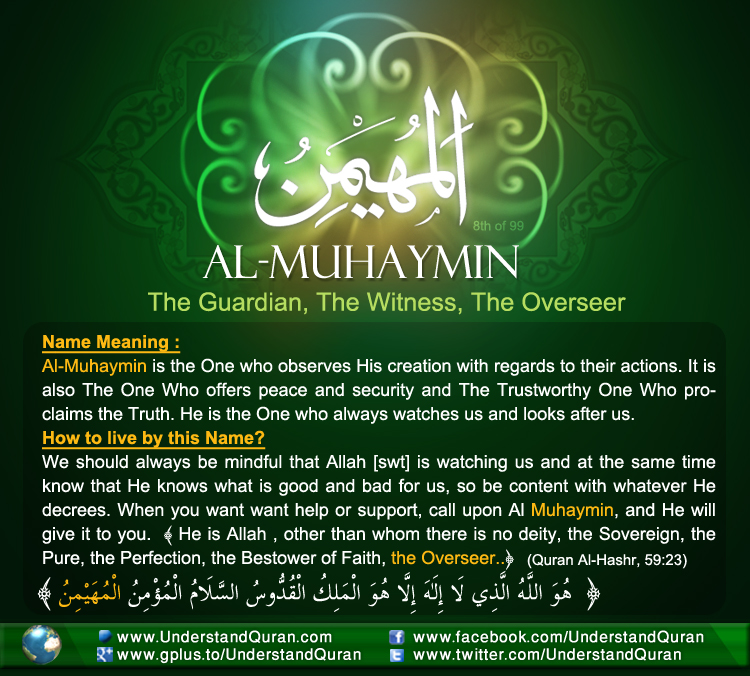 Allah calls Himself Al-Muhaymin— The Guardian, The Witness, The Overseer — on one occasion in the Quran. He is the One who ensures the wellbeing of creation. Al-Muhaymin observes, guards, and protects His creation!

The Overseer, Protector and Guardian

This root appears two times in the Quran in one derived form. Examples of this form are wamuhayminan (“and a guardian”) and al-muhayminu (“the Guardian”).
Linguistically, the root of muhaymin also means to extend a wing, like a hen protecting her chicks, and is related to the names Ar-Raqeeb (the Watcher), al Haafidh (The One who protects and guards), and Ash-Shaheed (The Witness). Al-Muhaymin is the One who observes, controls, looks after, completely covers us and judges us by the truth.

Al-Muhaymin Himself says: He is Allah , other than whom there is no deity, the Sovereign, the Pure, The Perfection, the Bestower of Faith, the Overseer. [Quran, 59:23]

The Quran is called ‘muhaymin’

Allah ‘azza wa jal calls the Quran muhaymin: And We have sent down to you the Book in truth, confirming the Scripture that came before it and muhaymin (trustworthy in highness and a witness) over it. [Quran, 5:48]
After mentioning the position of His Book Allah Al-Muhaymin instructs to make use of it: so judge between them with what Allah has sent down. [Quran, 5:48] The Quran is to be recited and memorized as well as to be applied in our daily life situations, such as judging between right and wrong in our relationship with Allah ‘azza wa jall and other people.

1. Be aware that Al-Muhaymin is watching you.
The Prophet salallahu ‘alayhi wa sallam said: Be mindful of Allah and Allah will protect you. [at Tirmidhee] Al-Muhaymin sees every deed you do; He observes your reactions to situations and even witnesses your inner thoughts. Remind yourself constantly of this fact and let it motivate you to stay away from sins and temptations. Al-Muhaymin will protect you from harm and even from committing sins if you are mindful of Him and keep remembering Him in your actions.

2. Accept the decree.
Believe with certainty that whatever Allah al-Muhaymin gives to you or keeps away from you is good for you, even though it does not always seem like it. He ‘azza wa jall is overseeing everything and everything is part of His plan. Complaining about your looks, about others’ belongings, about missed opportinuties, etcetera, are signs you have to strengthen your faith in Al-Muhaymin.
Accepting and being content with His qadr (decree) will be your true key to the tranquillity (saakinah) in your heart that you are so badly longing for but cannot find in anything else in this whole wide world.

3. Use the Quran, the muhaymin!
Don’t just read the Quran— interact with it, implement it, and memorize it. The Quran is muhaymin, trustworthy in highness, and a witness. The Prophet salallahu ‘alayhi wa sallam said: Verily, Allah elevates some people with this Quran and abases others. [Muslim] That is, those who fulfil the rights of the Quran will be raised high in this world and in the hereafter; those who leave it will be put down. Make the Quran a witness for you and not against you.

4. Ask Al-Muhaymin.
Indeed the deen of Islam is itself manners, where anyone that surpasses you in manners, is better than you in deen. [Ibn al-Qayyim] While working on your character, never think you cannot change for the better, and ask Al-Muhaymin to help you. Ask Him to protect you from your own desires and weaknesses. Imagine the protection of a hen for her chicks and know that Al-Muhaymin’s protection for you is beyond limits, so whenever you are in a difficult situation, you are scared, or feel lost, invoke Allah using this name.

5. Protect your heart.
The Prophet salallahu ‘alayhi wa sallam said: There is a piece of flesh in the body if it becomes good (reformed) the whole body becomes good but if it gets spoilt the whole body gets spoilt and that is the heart. [Al-Bukharee] Your heart is one of the greatest trusts given to you by Al-Muhaymin and it will be your most important witness when you stand before Him, so protect your heart.
How? Gain knowledge about the types of diseases mentioned in the Quran and Sunnah and their symptoms, assess yourself, and then seek the cure. Scholars mentioned four of the greatest poisons of the heart as: unnecessary talking, unrestrained glances, too much food, and keeping bad company.

O Allah, Al-Muhaymin, we know that You are the One who ensures our well-being. Make us mindful of You in everything we do and aid us in accepting and being content with Your decree in good and bad times. Make the Quran our close companion and a witness for us, protect and cure our hearts from its diseases, and protect us at all times, against others and ourselves, in this life and in the Hereafter, ameen!