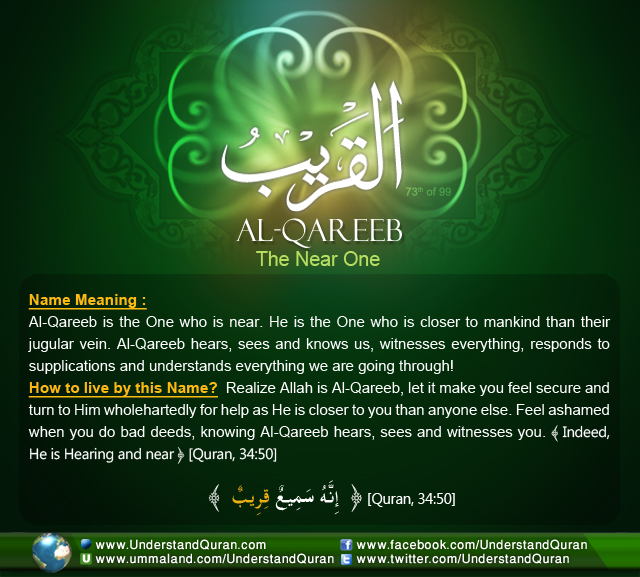 Allah calls Himself Al-Qareeb, the Near One, on one occasion in the Quran. He is the One who is closest to mankind, by His hearing, seeing, knowing, and witnessing, and the successful ones are those closest to Al-Qareeb in the Hereafter!

The Near, the Close One

This root appears 96 times in the Quran in 11 derived forms. Examples of these forms are taqraboo(“go near”), al-qurbaa  (“the relatives”), qareebun (“near, impending”) and al-muqarabeena (“those brought near”).

Linguistically, qareeb is related to time or place and the opposite is ba’eed (far). Qareeb can refer both to physical and non-physical closeness, for example in the expression: that person is close to my heart, in which it refers to a close emotional connection.
Allah Al-Qareeb is The Near through His perfect hearing, seeing, and understanding of the every action, feeling or thought of the whole of mankind.

Allah is Al-Qareeb and His type of closeness (qurb) is a general nearness or closeness, as He is the All-Hearer, All-Seer and All-Knower of both believers and non-believers, sinners and good-doers. He knows what is felt, done and thought. Allah says: … There is in no private conversation three but that He is the fourth of them, nor are there five but that He is the sixth of them – and no less than that and no more except that He is with them [in knowledge] wherever they are [Quran, 58:7]

Then there is a special closeness, reserved for those believers who work to attain it. Allah ‘azza wa jall says: … And the forerunners, the forerunners -those are the ones brought near [to Allah ] in the Gardens of Pleasure [Quran, 56, 10-12] The muqarraboon are those brought near to Al-Qareeb. They are those who believe and perform good deeds and therefore attain a close status to Allah ‘azza wa jall which translates into help, protection and blessings in this life and closeness of place to Him in Paradise.

1. Empty your heart to Al-Qareeb.
Some complain they don’t feel close to Allah, there is no concentration in prayer etc. Realize He is Al-Qareeb; when you’ve had a bad day, He knows what happened. When you had a good day, He knows what made you happy. So take your prayer to concentrate and empty your heart to Al-Qareeb; present to Him your worries, ask for His help, show Him your gratefulness and He will give you more. Transform every worry into a supplication! Allah says: Indeed, my Lord is near and responsive [Quran, 11:61]


2. Follow the call.
Al-Qareeb says: When my servants ask thee concerning Me I am indeed qareeb (close to them); I listen to the prayer of every suppliant when he calls on Me; let them also with a will listen to My call and believe in Me; that they may walk in the right way [Quran 2:186] So not only let this Name inspire you to ask Him, but also to follow His commands, prohibitions and instructions laid out in the Quran and Sunnah!

3. Be ashamed of your bad deeds.
Al-Qareeb uses His attribute of closeness together with His attribute of hearing: Indeed, He is Hearing and near [Quran, 34:50] Let this inspire you to mind everything you say, whether it is in public or private, at work or to relatives. Know Allah ‘azza wa jall is closer to you than your jugular vein, let this make you feel comforted and secure, but also be ashamed of your bad deeds, speech and actions, knowing He is so close to you!

4. Know the Day of Judgement is near.
Allah says: [The time of] their account has approached for the people, while they are in heedlessness turning away [Quran, 21:1] On many occasions in the Quran Al-Qareeb reminds us that the Day of Judgement is near. Act upon this knowledge by regularly bringing yourself to account, repenting and seeking Allah’s forgiveness often.

5. Strive to be of al-muqarraboon.
The muqarraboon have the highest place in paradise and their top consists of the prophets, the siddiqeen, the martyrs, and the righteous. Strive and ask Allah ‘azza wa jall to make you one of them. Ibn Katheer said about the ones close to Allah: They are those who do the obligatory acts and the recommended ones and they abstain from the prohibited acts, the disliked acts, and [even abstain] from some of the permissible ones [due to them bringing no benefit in the afterlife] [Tafseer ibn Katheer] Some of the salaf said: They are the first of people to go to the mosque and the first to go out for jihaad for the sake of Allah.

O Allah, Al-Qareeb, we know that You are closer to us than our jugular vein. Guide us in seeking Your closeness, turning to You only and respond to Your call. Adorn us with shame before You, help us prepare for the Day of Judgement and make us of al-muqarraboon, ameen!