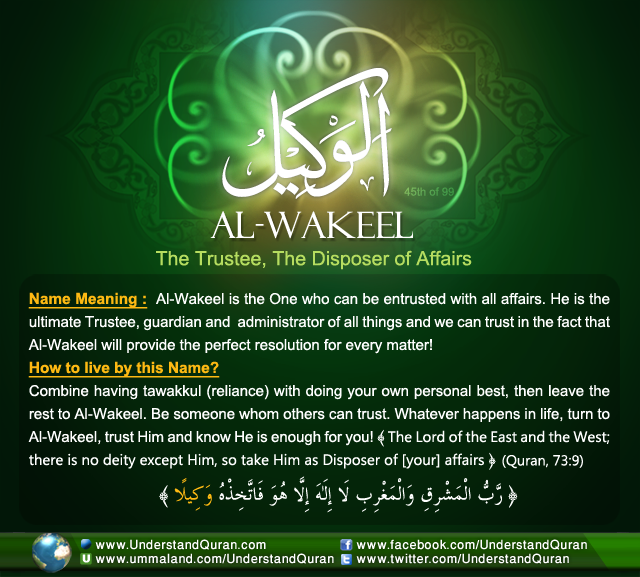 Allah calls Himself Al-Wakeel— The Trustee, The Disposer of Affairs, The Guardian— on 14 occasions in the Quran. Al-Wakeel is the only One who takes charge of the affairs of those under His care, managing all matters as He pleases. He is the One to be relied on, for all power belongs to Him!

The Disposer of Affairs, The One to be Relied Upon

Wakeel comes from the root waaw-kaaf-laam, which points to three main meanings. The first meaning is to appoint or entrust for the care or management of something. The second main meaning is to be a guardian of one’s interests, and the third is to rely upon.

This root appears 70 times in the Quran in four derived forms. Examples of these forms include tawakkaltu (“I put my trust”) and al-mutawakkileen (“the ones who put trust”).

Linguistically the wakeel of someone else is the person who efficiently represents him or does what he is incapable of doing on his behalf. Al-Wakeel is the ultimate Trustee, guardian and administrator of all things and we can trust in the fact that Al-Wakeel will provide the perfect resolution for every matter!

In the ayaat in which the name Al-Wakeel is mentioned, Allah gives a reference to His power and authority. The name Al-Wakeel is related in meaning to Al-Haseeb (The Reckoner, The Sufficer) and to Al-Qadeer (The All-Powerful); we entrust our affairs to Allah because only He has control over all things and only He is sufficient for us as provider and reckoner.

1.       Have trust and work hard.
Reliance on Allah (tawakkul) means you entrust your affairs to Him, take every worldly precaution, and submit to Al-Wakeel for the result. An example is the hijrah for which the prophet salallahu ‘alayhi wasallam and Abu Bakr radiyyallahu ‘anhu planned according to their means. However, they were overtaken by the Quraysh. This is when the prophet calmed Abu Bakr with a beautiful statement of tawakkul, saying What do you think is the destiny of two people who have Allah for their Companion?

One of the most beautiful examples of trusting in Al-Wakeel’s choice is the istakharah prayer. Ask Allah that if the matter is good for you to make it easy for you and if not, to take it away and then be content with the decree of Al-Wakeel.  Make it a habit to practice this sunnah in your daily life, for big and small matters, as the prophet salallahu ‘alayhi wa sallam taught the companions to make istakharah in all things, just as he used to teach them surahs from the Quran!

Many people are depressed or worried about their or their children’s future. Don’t fear the power of the enemy, never go for unlawful earnings, and know that you can trust Al-Wakeel because He will manage your affairs in the way best for you! Be inspired by what Ibraheem ‘alayhi sallam said when he was thrown in the fire: Allah suffices me, for He is the best disposer of affairs (hasbunallaahu wa ni’mal wakeel)!* Take the example of those who entrusted their souls to Al-Wakeel, like Haajar, when she was left in the desert with Ismaeel ‘alayhi sallam who said with true belief: Did your Lord order you to do so, then He shall not forsake us.

4.       Be someone others can trust and rely on. Be someone others can turn to when they need help, and when you have to act on someone’s behalf fear Al-Wakeel and fulfill your duty as good as you can. The Prophet salallahu ‘alayhi wa sallam said: Allah will aid a servant (of His) so long as the servant aids his brother. [Muslim]

5. Train yourself to trust Al-Wakeel.
The first time Musa ‘alayhi sallam saw the stick becoming a snake, he ran away in fear. The second time he did not run but felt fright within himself upon being confronted by the magicians, and the third time, the most difficult of these situations, when the army of the Pharaoh was behind them and the sea in front of them, he had no fear; he said what can be translated as, Not at all. Surely my Lord is with me; He will soon guide me. [Quran, 26: 62]  [paraphrased from the series In Thy Name we live by Dr. A. Khaled]

6.      Do dhikr with this name.
Every morning and evening say: حَسْبِ اللهُ لا إله إلا هو، عليه توكلت و هو ربَ العرش العظيم
Allah is sufficient for me. There is no God but He.  I have placed my trust in Him, He is Lord of the Majestic Throne. Whoever says this seven times in the morning after fajr, and seven times after Asr, Allah will take care of whatever worries him of the matter of this world and the hereafter. [Abu Dawood, Muslim]

The Prophet said: Whoever says(when he leaves his house) – Bismillaah, tawakkaltu ‘alaa Allaah, wa laa hawla wa laa quwwata illaa billaah – In the name of Allah, I put my trust in Allah and there is no power and no strength except with Allah- , it will be said to him: You are taken care of and you are protected and guided, and the devils will move away from him, and one devil says: What can you do with a man who has been guided, taken care of and protected? [Abu Dawood, At-Tirmidhi]

*For an excellent article on how to use this powerful dhikr, read this.

O Allah, Al-Wakeel, we know that You take care of all matters.  Make us of the mutawakkileen, those who gracefully rely on You and guide us to work in this world to the best of our ability. Make us of those others can trust in, protect us against our enemies and ourselves, guard over us and make us entrust our souls to you in times of ease and hardship, ameen!