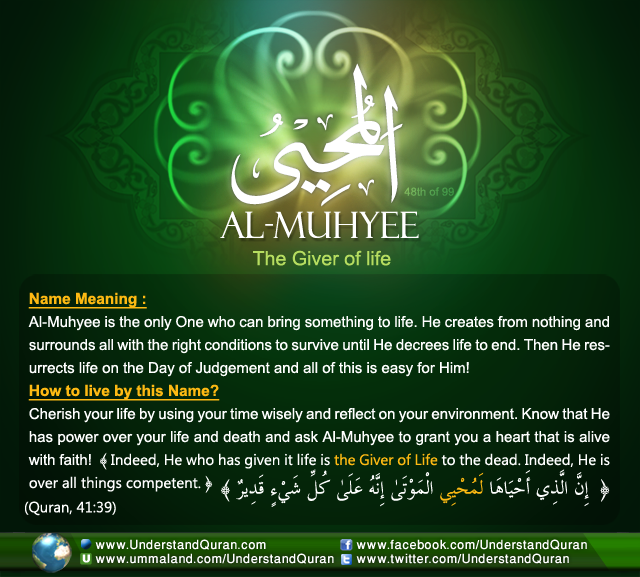 Allah calls Himself Al-Muhyee—The Giver of Life— on two occasions in the Quran. Al-Muhyee is the One who created life and decides what will be brought to life. He is the only One who can bring something to life, including the spiritual life to the hearts!

The Bestower of Life, The Reviver

This root appears 184 times in the Quran in 12 derived forms. Examples of these forms are yuhyee (“grants life”), hayyan (“alive”) and al hayaatu (” the life”).

Al-Muyhee is the only One who can give life to whomever He pleases, surrounding the creation with the right conditions to survive. Then He decrees death, to restore life and join the soul and body on the Day of Judgement to repay us for what we did in this world and this is an easy task for Him!

Al-Muhyee Himself says: . . . Indeed, He who has given it life is the Giver of Life to the dead. Indeed, He is over all things competent. [Quran, 41:39] So observe the effects of the mercy of Allah – how He gives life to the earth after its lifelessness…[Quran, 30:50]

The Plan of Life

The Prophet salallahu ‘alayhi wa sallam narrated: Verily, each of you is brought together in his mother’s abdomen for forty days in the form of a drop of fluid. Then it is a clinging object for a similar [period]. Thereafter, it is a lump looking like it has been chewed for a similar [period]. The angel is then sent to him and he breathes into him the spirit. He is also commanded to issue four decrees: to record his sustenance, his life span, his deeds and [whether he will be] unhappy [by entering Hell] or happy [by entering Paradise]..[part hadith, Al-Bukharee, Muslim]
Al-Muhyee bestows our life in stages and grows our body in a miraculous way, from a drop of fluid into a detailed body clothed with muscles, flesh, veins and skin. But not only psycically, Al-Muhyee also gives us life by sending an angel to breath the spirit into us and we remain limited in knowledge of our innerselves. On top of bestowing our lives, Al-Muhyee also commands to issue four decrees which determine the course of our life. Such is the plan of life of Al-Muyee!

1. Be convinced Al-Muhyee can make anything happen.
He it is Who gives life and causes death; so, when He decrees an affair, He only says to it: Be, and it is [Quran, 40:68] This is one of the most hope giving ayaat for those who call upon Him. As Al-Muhyee can bring everything to life and even restore life to that which appeared dead to us, so rest assured taking care of your matters is easy for Him, all you have to do is ask Him, wholeheartedly and sincerely. Turn every worry, moment of stress, wish and desire into a dua!

2. Ask for a heart alive with faith.
Scholars have described hearts, just like bodies, to be of three types; the healthy heart, the dead heart and the sick heart. The alive heart is a heart of faith, its services are exclusively reserved for Allah, willingly and lovingly, with total reliance, relating all matters to Him, in fear, hope, and sincere dedication and it is extremely important to work for a healthy heart: The Day on which neither wealth nor sons will be of any use, except for whoever brings to Allah a sound heart. [Quran 26:88-89]

3. Revive the sunnah.
Mankind has many different concepts of success in life. But what is the right way? He brings (beings/things) to life and causes death; therefore, believe in Allah and in His Messenger, the Prophet who believes in Allah and in His words, and follow him, so that you may walk in the right way [Quran, 7:158]. So make an effort to apply the sunnah in your daily life and for extra reward, revive acts from the sunnah by telling others about them, from the forgotten sunan like the prostration of gratefullness (sajda us shukr) to the neglected acts, like giving salaam on the street!

4. Cherish life.
Al-Muhyee gave you life and placed you on this earth as an ambassador. Respect your life by using your time wisely and respect other people’s life by benefiting them with your knowledge, skills and emotional support and never harm another life unjustly, not even the life of an animal. If you truly cherish life you constantly strive against lughw – useless activities as mentioned in the Quran – this includes useless conversations, watching things of no benefit etc.

5. Learn from nature.
Study the extremely valuable lessons Al-Muhyee teaches you through His works in nature. Among His Signs is that you see the earth laid bare, and then, when We send down water on it, it quivers and swells. He Who gives it life also gives life to the dead. Certainly He has power over all things. [Quran, 41:39] When you see the change of seasons, from greenery to bareness, reflect on the ups and downs of your life and that after dark(difficult) times, light(easy) times come.

6. Strive for knowledge.
Islamic knowldge is a light, ask Al-Muyhee to walk in light in this life and the next! Is he who was dead then We raised him to life and made for him a light whereby he walks among people like him whose likeness is that of one who is in utter darkness from which he cannot come out? [Quran, 6:122]

7. Remind yourself and others of the After-Life.

The Prophet salallahu ‘alayhi wasallam was asked: “Which of our companions are best?” He replied: One whose appearance reminds you of God, and whose speech increases you in knowledge, and whose actions remind you of the hereafter. [al-Muhasibi]

O Allah, Al-Muhyee, we know that You are the only Giver of Life. Bless us with hearts that are alive with faith encouraging us to righteous actions. Make us of those who  live by and revive the sunnah of Your Prophet, guide us in reflecting on Your signs in nature and learn from them. Give us beneficial knowlegde, grant us respect for our own life and the lives of others and make us of the best companions, reminding ourselves and others about the Hereafter, ameen!

PS: Have you signed up for our newsletter? Sign up now and receive the free welcome gift to the series,  The Names of Allah!