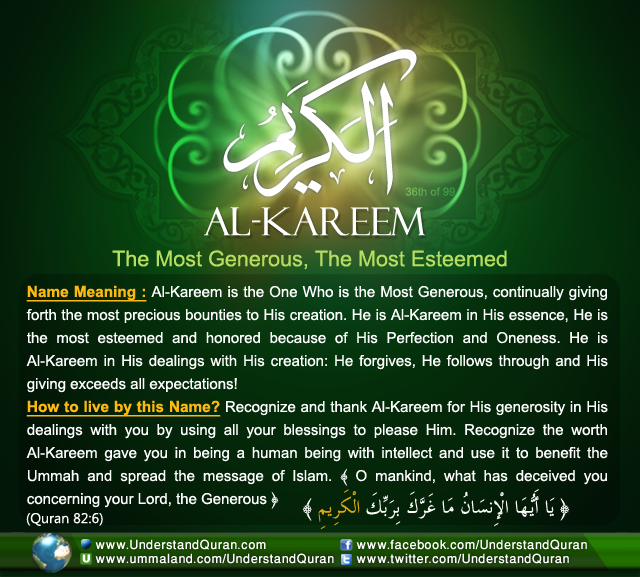 Allah calls Himself Al-Kareem— The Generous, The Honourable, The Beneficent— on two occasions in the Quran. He is Al-Kareem in both His essence, being the source of all virtue, good and honor. He is Al-Kareem in His dealings with His creation; He forgives, He follows through and His continually giving forth of the most precious bounties exceeds all expectations!

The Most Generous, Most Esteemed and Beneficent

Kareem,  Akram, and Ikraam come from the root kaaf-raa-meem, which points out to two main meanings. The first meaning is to be generous, giving, and beneficent. The second main meaning of this root is to be highly esteemed, honoured and valued.
This root appears 47 times in the Quran in eight derived forms. Examples of these forms are al-akram (“the Most Generous”), kareemun (“noble”), kiraaman (“dignified ones”), al-mukrameen (“the honoured ones”)  and al-ikraam (“and Honor ”).

In the Arabic language ‘kareem’ does not just mean generous but the term embraces many meanings. ‘Kareem’ includes being forbearing, kind, gentle, patient, noble, pure and beneficial. In other words each and every laudable thing is being described as ‘kareem’.
Examples are a precious ‘kareem’ stone, a beneficial ‘kareem’ letter and a noble, good-looking, a ‘kareem’ person.
Al-Kareem Himself says: O man! What has made you careless about your Lord, Al-Kareem (the Generous), Who created you, fashioned you perfectly and gave you due proportion? In whatever shape He willed, He put you together. [Quran 82: 5-8] and… Read! And your Lord is Al-Akram.[Quran 96: 3]

Al-Kareem Related to other Names

The name Al-Kareem implies all that is honourable, good, and virtuous and therefore is strongly related to various other Asmaa was-Sifaa (names and attributes) of Allah ‘azza wajal.

Al-Kareem is related to Al-Wahhaab (The Giver) and Ar-Razzaaq (The Provider) in the sense that He initiates favors to His slaves, beyond what we deserve. Al-Kareem brought you into existence even though He was not obliged to do so. Al-Kareem gives us the whole world, as He tells us: It is He Who created for you all that is in the earth. [Quran, 2: 29] Our book, the Quran, is not only an instruction but also a cure. Our prayers are not only rituals, but also treasure chests of multiple rewards. Our food is not just one kind, but an amazing variety of tastes, structures and flavours; this is the giving of Al-Kareem!

Al-Kareem is related to Al-‘Afuw (The Pardoner) because even when you sin and forget about it, Allah deals with you generously and makes you live comfortably. It is He who covers your sins and when you turn to Him out of His amazing generosity He doesn’t just forgive but completely erases your bad deeds and on top of this turns them into good deeds. He is At-Tawwaab. What a generous Lord!

Related to Ash-Shakoor (The Appreciative), Al-Kareem rewards you generously when you only present to Him little sincere acts of worship. The ultimate example is Jannah: everlasting pleasure for a couple of years of worship in this life!

Al-Kareem is related in meaning to Al-Wadood (The Loving); us being worthy of His divine love is truly a generosity we should recognize! Al-Kareem says: Verily, those who believe and work deeds of righteousness: the Most Gracious shall bestow love upon them. [Quran, 19: 96]

His Attribute of karam truly is beyond our imagination!

1. Be generous to be close to Al-Kareem.
Allah’s names and attributes are of two types: those that are attributed only to Him ( e.g. Al-Khaaliq, The Creator) and those that can and should be strived for to be attributed to ourselves, one of them is Al-Kareem. Be generous with your belongings, time, and even your words.  The prophet salallahu ‘alayhi wa sallam said: The generous one is close to Allah, close to people, far from the fire; a stingy person is far from Allah, far from people, far from Paradise; and the generous ignorant person is more beloved to Allah than a stingy worshipper. [At-Tirmidhi]

2. Develop a relationship with the Quran al-Kareem.
Allah’s book, the Quran, is kareem because it is full of benefits and guidance, good things and blessings, it includes not a single error or contradiction. Open Al-Quran al-Kareem at least every single day; even if you read one ayah a day, understand it and let it transform your character, mind and heart and see how it will make you more kareem, insha’Allah!

3. Spread the message of Islam.
Al-Kareem honoured (karram-na) us as human beings and specifically honours us as Muslims. Recognize the worth Al-Kareem gave you in being a human being with intellect and use it to benefit the Ummah. Share the ayaat of the Quran with others, teach someone else, even if it is one hadith and spread the message of Islam by showing beautiful, honorable manners to non-Muslims.

4. Don’t forget the fire.
Indulging in all the blessings Al-Kareem gave you, don’t forget about hellfire. The Prophet salallahu ‘alayhi wa sallam said, The people will be thrown into Hell ( Fire) and it will keep on saying, ‘Is there any more?’ till the Lord of the worlds puts His Foot over it, whereupon its different sides will come close to each other, and it will say, ‘Qad! Qad! (enough! enough!) By Your ‘Izzat (Honor and Power) and Your Karram (Generosity)!’ Paradise will remain spacious enough to accommodate more people until Allah will create some more people and let them dwell in the superfluous space of Paradise. [Saheeh al-Bukharee]

5. Study about Al-Kareem.
Al-Kareem says: O man! What has made you careless about your Lord, Al-Kareem (the Generous). Study about Allah, learning about His names and attributes and what they mean to you. Do not be deceived by this world and by the Shaytan. Know that Al-Kareem will never let down those who spend their lives obeying Him, even though others might say practicing your deen is not “cool.” Don’t ever think those who have much in this life but are denying Him, will have any share in the Hereafter. You are here because of Him and for Him; use the intellect and skills Al-Kareem gave You to work towards His pleasure and His ultimate generosity: Paradise!

O Allah, Al-Kareem, we know that You are the Most Generous and Most Esteemed in Your being and dealings. Guide us to be generous to others, aid us to develop honouroble and noble manners, adorn us with understanding and practicing of Your book.  Guide us in spreading the noble message of Islam and return the honour to the Ummah. Make us reflect Your attribute of karama by always being thankful for Your favors which are beyond our basic needs and only turning to You when we ask and enter us into Your greatest generosity, Jannatul ‘Alaa without reckoning, ameen!