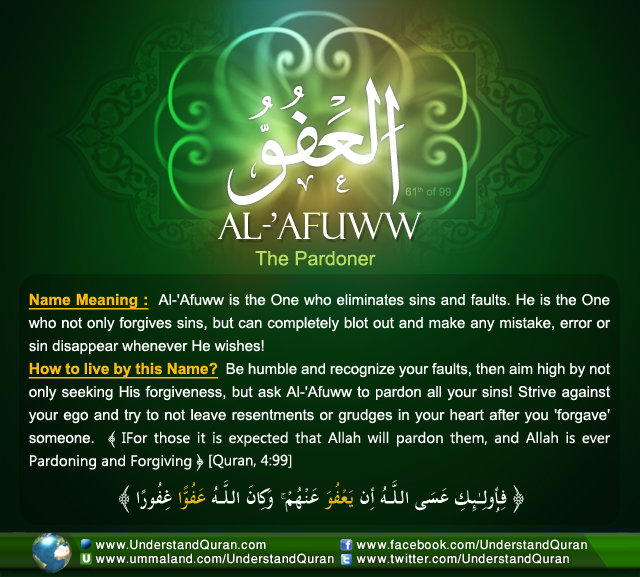 Allah calls Himself Al-‘Afuww—The Pardoner, The Eliminator of Sins, The Effacer— on five occasions in the Quran. He is the One who can make any sin or mistake disappear. Al-‘Afuww not only forgives but can also remove wrong actions, errors, and faults, leaving no trace of them!

The One who eliminates sins, The Pardoner

This root appears 35 times in the Quran in four derived forms.  Examples of these forms are ‘afaa (forgave), al-‘afwa (the surplus, (to) forgiveness)  and wal ‘aafeena (those who pardon).

Linguistically, ‘afw refers to two concepts, one of which is to remove all traces. In the Arabic language it is sometimes used with wind referring to its blowing and removing of footprints etc. The other concept is to willingly give others without constraint. Al-‘Afuww is the One who removes and erases someone’s sins, mistakes, errors and faults and their traces and consequently becomes pleased with one. He is the One who then grants them blessings willingly without even being asked!

Difference between pardoning and forgiving

Of the five times, Allah’s name Al-‘Afuww is mentioned four times with His name Al-Ghafoor (The Forgiving) in the Quran.  Allah ‘azza wa jall might forgive some people and pardon others. Forgiving means that Allah ‘azza wa jall conceals our sins and mistakes and we will not be punished for them on the Day of Judgement. However, they are still there in our book of deeds. When Allah pardons the sins of people, the sins are completely erased from their book of deeds; He will not even remind them of their sins, nor question them, simply because their sins have been removed. Pardon is greater than forgiveness!

Grave sins and pardon in the Quran

Allah’s pardon is mentioned in the Quran along with grave sins, such as Baani Israeel who worshipped the calf: Then We forgave you after that so perhaps you would be grateful. [Quran, 2:52] And those who turned away at the battle of Uhud: Then he turned you back from them [defeated] that He might test you. And He has already forgiven you, and Allah is the possessor of bounty for the believers. [Quran, 3:152] This is the beautiful pardon of Al-‘Afuww!

How can you live by this Name?

The people who surpress anger and pardon others are the people of Paradise. Al-‘Afuww says: Who spend [in the cause of Allah] during ease and hardship and who restrain anger and who pardon the people – and Allah loves the doers of good [Quran, 3:134] Ibn Katheer mentions: They forgive those who treat them with injustice. Therefore, they do not hold any ill feelings about anyone in their hearts, and this is the most excellent conduct in this regard.

Fight against your ego and ask Al-‘Afuww to help you to not even leave a trace of bad feelings and resentment in your heart. If someone wrongs you, think about your own sins and those who you wronged. Strive to pardon others so that Allah ‘azza wa jall may pardon you!

2. Don’t remind others of their mistakes.

Imagine Allah ‘azza wa jall pardoned all your past sins; not a single sins would be recorded in your book of deeds. Reflect on how much you should love Al-‘Afuww! A beautiful opportunity is Laylatul Qadr, which comes once a year in Ramadhan. Value this crucial night, seek it with your best deeds, and remind yourself that night and every other night how beautiful the pardoning of Allah ‘azza wajal is!

4. Say this dua from your heart.

O Allah! Verily You are the Oft-Pardoning, You love to pardon, so pardon me [Ahmad, At-Tirmidhee, An-Nasaa’i, Ibn Majah] Memorize this dua and beg Al-‘Afuww with is sincerely. Recognize your sins, be humble and then aim high, not only asking your Lord for forgiveness, but for Him to pardon each and every sin you committed!

O Allah, Al-‘Afuww, we know that You can erase all sins. Grant us the strength to pardon others and make us reflect on Your love and blessings upon us. Aid us to obey you and guide us in keep asking You sincerely to pardon all our sins, mistakes, neglect, errors and faults so we will not even be questioned about them on the Day of Judgement, ameen!