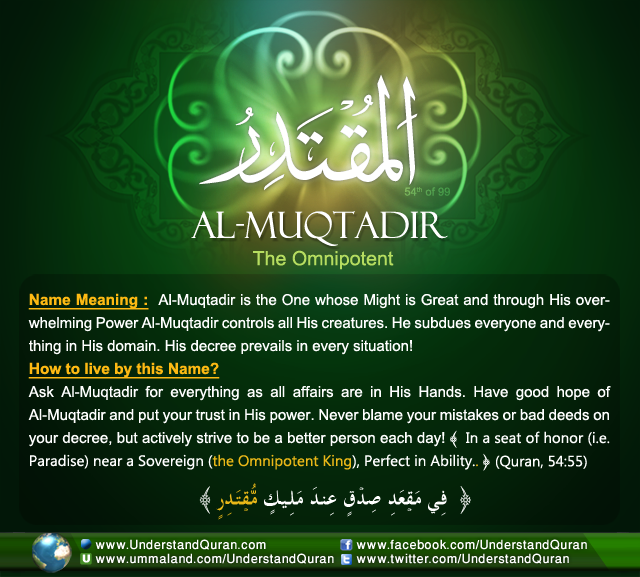 Allah calls Himself Al-Muqtadir— The Omnipotent, The Powerful Determiner— on two occasions in the Quran. Al-Muqtadir is the One who has the power and he ability to do whatever He decides. His Power enforces all decrees and His decree prevails in every situation!

The Omnipotent, The All-Determining

Both muqtadir and qadeer come from the  root qaaf-daal-raa, which points to four main meanings. The first meaning is to have the power to accomplish, to be capable. The second is to measure, to distribute something, or to make manifest. The third is to decree or to ordain and the fourth is to prevail.

This root appears 132 times in the Quran in 11 derived forms. Examples of these forms are taqdiru (“is decreed”), qadran (“a measure”), and maqdooran (“destined”).

Allah ‘azza wajal refers to Himself with the active participle muqtadir four times in the Quran, of which two mentions of Muqtadirin, (The) Powerful One, Most Powerful, or the Omnipotent.

Linguistically qadeer, qaadir, and muqtadir are all derived from the root qaaf-daal-raa, all pointing to the all-prevailing and perfect Power of Allah ‘azza wajal. Muqtadir is the intensive form of the root which refers to the use of supreme power to actively enforce whatever His wisdom decides. The ‘mu’ at the beginning of the word in Arabic refers to a means, or theembodiment of an action, which results in translations as the do-er or the one who is, eg Muslim, one who submits.

1. Never think you can depend on your own powers.

Your tawfeeq (ability) is from Al-Muqtadir only, your success is not because of yourself but because He enabled you to accomplish matters.  When you show your need for Him, Al-Muqtadir will support you but when you think you can depend on your own power for even the blink of an eye, He will abandon you. And let not those who disbelieve think that they can outstrip (escape from the punishment). Verily, they will never be able to save themselves[Quran, 8:59] We often take this ayah as not for us as we are no disbelievers, but how often do we fall into the trap of thinking that ‘our children are good, because we raised them well’ or ‘I have this job, because I am clever.’ Always humble yourself by thinking: all I have is from Allah Al-Muqtadir!

When someone is diagnosed with a fatal disease, they should still think, Allah ‘azza wajal is able to do all things! It is easy to say, Allah is capable to do all things, but do you really live by this? The companions of Musa said: ” We are sure to be overtaken. Musa said: “Nay, verily with me is my Lord. He will guide me. [ Quran, 26:61-62] He was alone facing many enemies, but his belief in the determining power of Al-Muqtadir was unshakable, let this be your example when you feel overpowered or hopeless and tell yourself: Allah is really able to do all things and He will guide me through this!

3. Be grateful for the hidden blessings.

Al-Muqtadir forces each and everything in this world to happen according to His infinite wisdom. There is a reason behind everything and only as a believer can you benefit from each situation in your life, good or bad.  Allah had completed and perfected His Grace upon you, (both) apparent and hidden [Quran, 31:20] Thank Al-Muqtadir each day for His hidden blessings!

4. Remember the dua of the Prophet Yunus.

But he cried through the darkness: Laa ilaaha illaa anta [ none has the right to be worshipped but You, subhanaka [Glorified and Exalted are you], innee kuntu min adh-Dhaalimeen [truly, I have been of the wrong doers]. So We answered his call, and delivered him from the distress. And thus We do deliver the believers [ Quran, 21: 87-88] By narrating this story in the Quran Al-Muqtadir made this event into a daily life lesson for every believer: no matter how dark your situation is, turn to Al-Muqtadir, recognize His position, realize your position and He will give you a way out.

5. Value the importance of peace of mind.

The decree of Al-Muqtadir comes from perfect knowledge and power and it controls our daily life. You are making hundreds of choices each day responding to many different situations, and each time you have the choice: do I turn to Allah or do I turn away from Him? You can get angry, or try to have patience. You can swear or remain quieit, you can backbite or you can talk good about others. Al-Muqtadir says: Verily, in the remembrance of Allah do hearts find rest [Quran, 13:28]
Al-Muqtadir gives money, power, intelligence and beauty to people, but He decrees true peace of mind to His believers only! So with every choice you make throughout your day, remember Allah.

To read about the related Beautiful Name Al-Qadeer, click here.

O Allah, Al-Muqtadir we know that Your power enforces all decrees.  Guide us to practise our belief in your All-ability and capability, make us grateful for all aspects of your decree for us,  save us from arrogance and adorn us with tranquil hearts who remember you abundantly, ameen!

The Understand Quran Academy Team
PS: Have you signed up for our newsletter?
Sign up now and receive the free welcome gift to the series,  The Names of Allah!