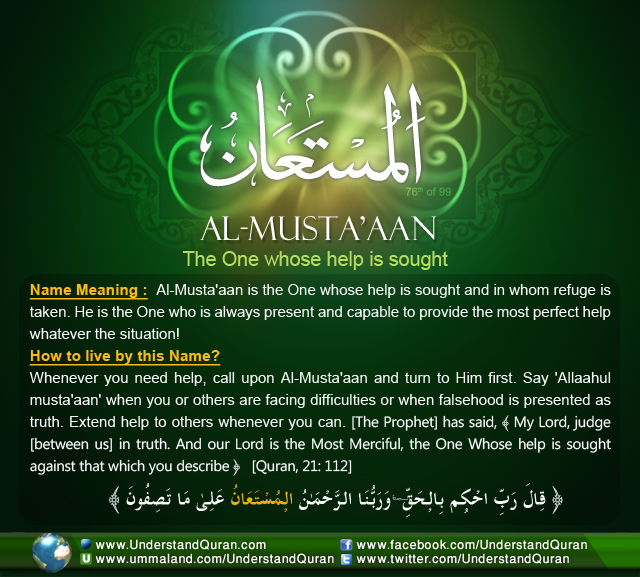 Allah calls Himself Al-Musta’aan— The One whose help is sought— on two occasions in the Quran. Al-Musta’aan is the one whose assistance and support are sought and in whom refuge is taken. Any help the creation provides to each other, is through His help alone!

The One sought for help

Musta’aan comes from the root ‘ayn-waaw-noon which points  to two main meanings. The first main meaning is to seek or ask for help and assistance and the second is to aid, cooperate and help one another. A third meaning is to be middle-aged.

This root appears 11 times in the Quran in five derived forms. Examples of these forms are wa a’aanahu (“and helped him”), ta’aawanoo (“help one another”), nasta’eenu “(we ask for help”) and ‘awaanun (“middle-aged”).

Linguistically, isti’aanah refers to the concept of seeking help. It comes from the same root as nasta’een— we seek help— ta’aawun –help one another- and musta’aan – the one whose help is sought. Allah is Al-Musta’aan, which means that not only He is the Helper (An-Naseer), but He is the only one whose help first and foremost should be sought. He is the One who knows, sees, hears and controls all affairs and therefore His help is perfect at all times.

Al-Musta’aan Himself says: . . .And they brought upon his shirt false blood. [Jacob] said, Rather, your souls have enticed you to something, so patience is most fitting. And Allah is the one sought for help against that which you describe [Quran, 12:18] and . . . [The Prophet] has said, My Lord, judge [between us] in truth. And our Lord is the Most Merciful, the one whose help is sought against that which you describe. [Quran, 21:112].

The meaning of seeking help from Allah

In Islamic context, isti’aanah means to seek help from Allah ‘azza wa jall alone and it is an act of worship. In some circumstances seeking someone’s help other than Allah is considered as shirk and in certain circumstances it is not.

Firstly, in some issues you can only ask Allah and Allah alone and asking others in these circumstances is major shirk. Examples are asking others to seek blessings, provisions, removal of a disease or giving security.

Secondly, there are both worldly and religious matters that can be sought from the creation, however with certain conditions. An example is when you loose something and ask someone to help you look for it. Still you first turn to Allah and then ask the assistance of someone else in that matter.

The one sought for help needs to meet three conditions: they have to be alive, present and capable. We cannot ask the dead for help and we cannot ask those for help who are not present (the prophets could also not hear the calls for help from people who were not within their hearing). And we cannot seek that which others are not capable to give; like asking a shaykh to put you in Paradise, even if he is alive and you are with him. Only Allah ‘azza wa jall is capable of doing so, and asking someone else in this matter would be shirk.

1.Say Allaahul Musta’aan.
Each prayer you say: You alone do we worship, and You alone do we turn for help [Quran, 1:5] Do you really seek His help?  Allaahul musta’aan is a beautiful statement  you can find twice in the Quran.

In Surah Yuusuf, his sons clearly described something that had not taken place to Yaqoob; no wolf ate Yuusuf, but what could Yaqoob do? All he could do was turn to Allah and he said: Allaahul musta’aanu ‘alaa ma tasifoon – And Allah is the one sought for help against that which you describe. [Quran, 12:18] We can learn to use this dhikr when falsehood is presented as truth which causes you or others difficulty.

In surah Al-‘Anbiyaa the Prophet salallahu ‘alayhi wa sallam used this statement himself when disbelievers were disrespecting Allah: wa Rabbunar-Rahmaanul Musta’aan’alaa maa tasifoon– And our Lord is the Most Merciful, the One Whose help is sought against that which you describe [Quran, 21:112]

2. Seek Al-Musta’aan first and foremost.
Ibn Abbaas radiyallahu ‘anhu said: One day, I was riding behind the Prophet when he said: O boy! I will instruct you in some matters. Protect the commandments of Allah, He will preserve you. Safeguard His Rights, He will be ever with you. If you seek help, seek help from Allah alone; and if you need assistance, supplicate to Allah Alone for help. And remember that if all the people gather to benefit you, they will not be able to benefit you except that which Allah had foreordained (for you); and if all of them gather to do harm to you, they will not be able to afflict you with anything other than that which Allah had pre-destined against you. The pens had been lifted and the ink had dried up. [At-Tirmidhee]

Focus less on people, don’t fear the effect of anyone’s decisions and know that even if people seem to benefit you, the true source is Al-Musta’aan. Even though you are permitted to seek help from others; it is crucial you first call on Al-Musta’aan to provide help and rely on Him alone and not on others. So next time you borrow money of a friend, or even ask a teacher to help you understanding a lesson, first ask Allah to help and guide you and He will provide His help, sometimes by means of other people or even objects or animals (think of the birds who destroyed the army of Abraha described in Surah Al-Feel)!

3.Help one another.
Al-Musta’aan says: And co-operate all of you together upon piety and righteousness. Help you one another in righteousness and piety; but do not help one another in sin and transgression.  And fear Allaah.  Verily, Allaah is severe in punishment. [Quran, 5:2] Extend help in that which is good and halaal to others and never help others in doing that which Allah ‘azza wa jall forbade. For example helping someone to buy alcohol, commit zinaa, etc.

4. Limit yourself in asking others.
Allah’s Messenger salallahu ‘alayhi wa sallam said: Who will guarantee me that he will not ask mankind for anything, and I will guarantee for him Paradise (in return)? So Thawban said, “I”, and he added, “And I would never ask anyone for anything.” [Abu Dawood] Even though in cases it is permissible to ask others, limiting yourself in seeking aid from others is a characteristic of the pious and takes courage and strength and truly reliance on Allah; the promise for those people is no less than Paradise. A dhikr you can use in this  context is:

فَقُلْ حَسْبِي اللَّهُ لا إِلَهَ إِلاَّ هُوَ عَلَيْهِ تَوَكَّلْتُ وَهُوَ رَبُّ الْعَرْشِ الْعَظِيمِ Say: Allah is sufficient for me. None has the right to be worshiped but He, in Him I put my trust and He is the Lord of the Mighty Throne [Quran, 9:129]. The Prophet salallahu ‘alayhi wa sallam used to say this seven times in the morning and evening. Revive this sunnah and live by it!

O Allah, Al-Musta’aan, we know that You are the only One whose help is sought. Make us of those who truly seek Your help first and foremost, beautify us with the feature of not asking others often and make us of those who help others in that which is good and encouraged by You, ameen!
The Understand Quran Academy Team