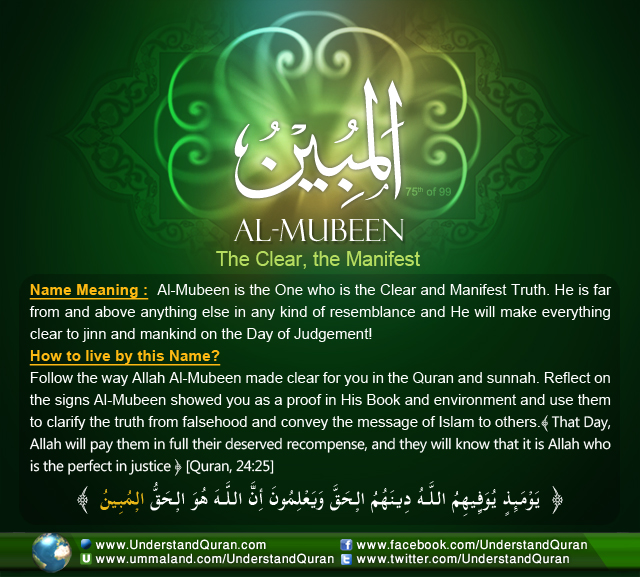 Allah calls Himself Al-Mubeen— The Clear, The Manifest One— once in the Quran. Al-Mubeen is the Clear and Manifest Truth. He is the One who clarifies what is falsehood and what is truth and manifests His signs to the creation!

The Clear, the Manifest, the One Beyond Resemblance

This root appears 523 times in the Quran in 13 derived forms. Examples of these forms are yabayyinu (“makes clear”), bayna (“between”), al-bayinaatu (“the clear proofs”)and mubeenun (“clear”).

Linguistically, mubeen implies something that is clear in essence and something which clarifies something else. Al-Mubeen is the One who is far from and above anything else in resemblance, His Names and Attributes are clear and He is the One who clarifies the truth from falsehood in this life and ultimately on the Day of Judgement.

Al-Mubeen Himself says: . . . That Day, Allah will pay them in full their deserved recompense, and they will know that it is Allah who is the perfect in justice [Quran, 24:25]

The Quran is Mubeen

Allah ‘azza wa jall described His Book as mubeen; al kitaabil-mubeen. This characteristic of the Quran can be found especially in chapters after the disjointed letters (al huroof muqatt’aat) are mentioned. For example: Ta-Seen-Meem. These are the ayaat of the ‘mubeen’ Book [Quran, 28:1-2] and Ha-meem. And by the ‘mubeen’ book [Quran, 43:1-2].

The Quran is far from being compared to any other book, it is a clear proof (bayyinah) in itself – it is authentic and unique-  and it clarifies the truth from falsehood and guidance from misguidance!

Follow the way Allah Al-Mubeen made clear for you from the two sources: the Quran and sunnah. Al-Mubeen says: There has come to you from Allah a light and a clear (mubeen) Book [Quran, 5:15] Make sure you complete reading the Quran from cover to cover in your own language as a minimum. Study the explanation of the Quran, such as the Tafseer of Ibn Katheer to gain more understanding of the meanings. Don’t be satisfied by merely reciting the Quran without understanding it, how else can it be a source of guidance? So treat the ayaat of the Quran as the signs on your way through this life they are meant to be and focus on your final destination: Paradise.

Study the ways of the Prophet salallahu ‘alayhi wa sallam as Allah ‘azza wa jall describes him as mubeen:It has not been revealed to me except that I am a clear (mubeen) warner [Quran, 38:70]. Revive his sunnah in your daily life( click here for the Revive a Sunnah Series: https://understandquran.com/revive-a-sunnah)

One of the ways Allah Al-Mubeen clarifies the straight path is by warning us against hindrances and enemies on our way for whom we should be prepared. Allah ‘azza wa jall says: O mankind, eat from whatever is on earth [that is] lawful and good and do not follow the footsteps of Satan. Indeed, he is to you a clear enemy [Quran, 2:168] Treat shaytan as your enemy and use ‘a’oodhu billaahi minash-shaytanir rajeem’ as a daily life weapon in times of anger, doubt and fear!

It is Al-Mubeen clarifies for you what is right and what is wrong; never see a sin as small or big, rather consider the One you are sinning against. Allah ‘azza wa jall says: But whoever earns an offense or a sin and then blames it on an innocent [person] has taken upon himself a slander and manifest(mubeen) sin [Quran, 4:112]. Ask Al-Mubeen sincerely to make you recognize your sins, so you are able to repent and set them straight. How many people are blinded by their own sins?

Al-Mubeen will ultimately clarify everything for us on the Day of Judgement, where lies will be made evident and the truth cannot be escaped from by the disbelievers. Allah ‘azza wa jall says: So worship what you will besides Him.” Say, “Indeed, the losers are the ones who will lose themselves and their families on the Day of Resurrection. Unquestionably, that is the manifest (mubeen) loss [Quran, 39:15]

Pray to Al-Mubeen that you will not become a case against yourself on this dreadful day because of your bad deeds overshadowing your good deeds, because of the sins you belittled or because of the friends you chose: O you who have believed, do not take the disbelievers as allies instead of the believers. Do you wish to give Allah against yourselves a clear (mubeen) case? [Quran, 4:144]

O Allah, Al-Mubeen we know that You are the Clear and Manifest Truth. Enable us to follow Your signs of the Quran and sunnah and increase our knowledge. Make us aware of our enemies and protect us against them and make clear for us the way to Your pleasure by giving us the ability to differentiate between right and wrong and acting upon this, ameen!