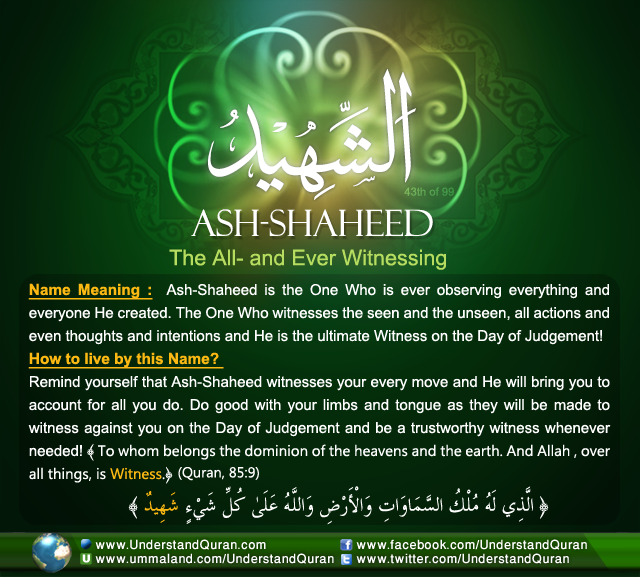 The Witness, the Testifier, the Certifier

Shaheed comes from the root sheen-haa-daal, which points to three main meanings. The first meaning is “to bear witness.” The second meaning is to offer testimony, and the third is to have knowledge of something.

This root appears 160 times in the Quran in nine derived forms. Examples of these forms include yashhadu (“to testify”), ashhidoo (“to take witness”), shahaadati (“the seen”) and shuhadaa (“witnesses, martyrs”).

Shaheed refers to Allah’s awareness of everything; He hears every sound, loud and quiet, and sees the small and the large. In addition, He is the One who will testify for or against His servants for their deeds.

Say: What thing is the greatest witness? Say: Allah is shaheed between you and I; this Qur’an has been revealed to me that I may warn therewith – you and whomsoever it may reach. [Quran, 6:19]

Allah (Himself) is Witness that there is no god save Him. And the angels and the people of knowledge (too are witnesses). [Quran, 3:18]

A Scene of the Souls

When Allah created Adam, He wiped Adam’s back and every person that He will create from him until the Day of Resurrection fell out from his back. [At-Tirmidhi and Al-Haakim] Allah stated that He brought the descendants of Adam out of their fathers’ loins, and they testified against themselves that Allah is their Lord and King and that there is no deity worthy of worship except Him. Allah then said,(and made them testify as to themselves (saying): “Am I not your Lord” They said: “Yes!”) [Tafseer ibn Katheer]
This was your first testimony and it means we will have no excuse on the Day of Judgement!
It will be said to a man from the people of the Fire on the Day of Resurrection, “If you owned all that is on the earth, would you pay it as ransom’ He will reply, `Yes.’ Allah will say, `I ordered you with what is less than that, when you were still in Adam’s loins, that is, associate none with Me (in worship). You insisted that you associate with Me (in worship).” [Tafseer ibn Katheer]

1. Say the sahahda, live the shahada. The Prophet salallahu ‘alayhi wa sallam said: Man shahida an la ilaha illallah dakhala al-jannah – Whoever witnesses that there is no god but Allah alone enters Paradise.[Saheeh Muslim]. Your testimony of faith in Allah is something you not only utter, but must live by. When you say I bear witness there is no god but Allah it means that in your talk and actions, in your house or outside you show that you love Allah more than anyone else, you accept Him as your Creator, Master and Ruler of the universe, that you worship Him alone in all matters and not your desires or others’ directions. Next time when you say the shahada in your prayer, reflect upon the meaning. Increase in saying la ilaha illallah to renew your emaan!

2. Trust in Ash-Shaheed. Ash-Shaheed says in this beautiful soothing ayah: So wait patiently for your Lord’s decree, for surely you are in Our sight. [Quran, 52: 48]  Rest assured that any unjust treatment by the hands of others you go through, slander, gossip or abuse, Ash-Shaheed is your Witness and you will get justice.

3. Remember that you are a servant. It’s sometimes easy to shout at your family or children inside the house, or even oppress someone when you are in a position of authority over them. Remind yourself in each situation, wherever you are, whoever you talk to, whatever position you have, that you are a servant of Allah. Ash-Shaheed is witnessing every step you take and will you to account. Use this tip: when you are about to do something wrong, look up at the sky and imagine Ash-Shaheed watching you!

4. Don’t make your limbs testify against you. Use your tongue for speech beloved by Ash-Shaheed, your eyes to read the Quran, your limbs to pray to Him as they will all testify as what you used them for! The Prophet salallahu ‘alayhi wa sallam said: I was amazed at how a servant will dispute with his Lord on the Day of Resurrection. He will say, “My Lord, did You not promise me that you would not treat me unjustly” Allah will say, “Yes.” The man will say, “I will not accept any witness against me except from myself.” Allah will say, “Is it not sufficient that I and the angels, the noble scribes, are witnesses” These words will be repeated several times, then a seal will be placed over his mouth and his organs (or limbs) will speak about what he used to do. Then he will say, “Away with you! It was only for your sake that I was arguing!”)” [Muslim and An-Nasa’i]

5. Always stand up for the truth. Always stand up for the truth in your testimonies, even if it is against yourself! Sometimes it is hard to admit a mistake, or testifying for the truth might even endanger you, but know this characteristic is one of true honour of a believer, which earns you not just a place in Paradise, but a place of honour!  And those who are in their testimonies upright and those who [carefully] maintain their prayer: they will be in gardens, honoured. [Quran, 70:33-35]

O Allah, Ash-Shaheed, we know that You witness all things. Guide us to live by the shahada and make us utter the testimony of faith on our deathbed. Help us remember that You are witnessing us, and make this awareness an inspiration for us to increase our good deeds. Make us always stand up for the truth and join us with the prophets and shuhadaa in the highest Paradise, ameen!