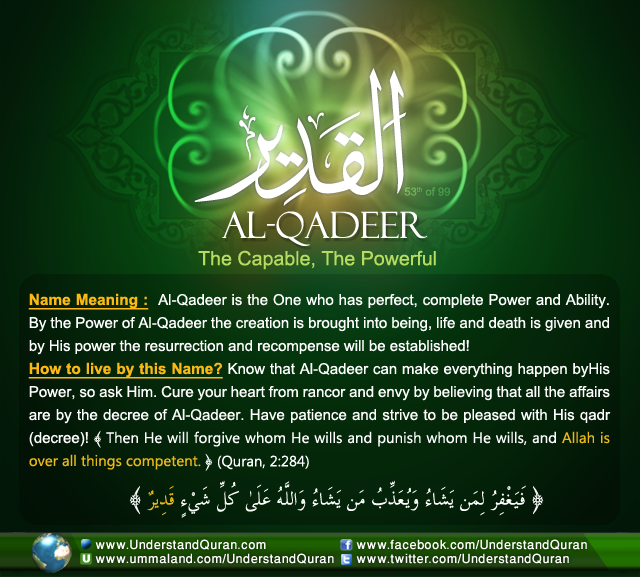 Allah calls Himself Al-Qadeer— The Powerful— on one occasion in the Quran. Al-Qadeer is the One with complete power. He is the One who decrees; He simply says, Be! and it is.  Al-Qadeer needs no means to do anything!

The Powerful, The All-Capable

Qadeer comes from the root qaaf-daal-raa, which points to four main meanings. The first meaning is to have the power to accomplish, to be capable. The second is to measure, to distribute something, or to make manifest. The third is to decree or ordain and the fourth is to prevail.

This root appears 132 times in the Quran in 11 derived forms. Examples of these forms are yaqdiru (“he has power”), qaddarnaa (“we have decreed”), al-qadr (“of power”) and qaadirun (“is Able”).

Allah ‘azza wajal refers to Himself with the nominal qadeer 45 times in the Quran, of which one mention is Al-Qadeeru, The Powerful.

Linguistically qadeer, qaadir, and muqtadir are all derived from the root qaaf-daal-raa and all of them demonstrate that power is established as an attribute of Allah and that He has absolute Power. He is the One who is capable of doing everything, who has perfect power over the creation, who measures everything with perfection, and who is the One who decrees all that was, is, and will ever be. His ability combined with His infinite Knowledge makes Him Al-Qadeer and Al-Aleem!

Al-Qadeer Himself says: . . . Allah is the one who created you from weakness, then made after weakness strength, then made after strength weakness and white hair. He creates what He wills, and He is the Knowing, the Competent [Quran, 30:54]

Al-Qadeer has the power to replace a whole nation with another one in whatever way He wants. With His power He can make large pieces of the earth lifeless and at the same time grant or withhold great amounts of possessions from whomever He wills.

Just as the power of His punishment is unparalleled, so is His power to grant mercy to His sincere slaves. As a reward for their patience, certainty of faith, and trust in Him, Al-Qadeer uses His power to help His servants out of difficulties.

1. Know that everything is predestined.

How often have you been upset because you’ve lost money, possessions, or a job? Some even respond immediately by asking, Why me? What did I do wrong?

Cure your heart from rancor and envy by believing that all affairs are by the decree of Al-Qadeer!

Follow the pious predecessors by striving to be content with the decree of Al-Qadeer. This means that you realize that everything that happens to you is pre-destined but also that you try to not feel any bitterness when you are tested.

Rida (contentment) is the praiseworthy station of not only recognizing, but also being pleased with the decree of Allah. Don’t ever let your love for Al-Qadeer decrease when something doesn’t go your way! Contentment is the greatest door that one enters to Allah, It is the source of tranquility for the worshiper and paradise on earth. Whoever does not enter it will not enter the Paradise in the Hereafter [Ibn Taymiyyah]

Whenever you have a decision to make, no matter how big or small, consult Al-Qadeer and ask Him to choose what is best for you and your deen, in this life and in the Hereafter, by praying the sunnah istakhaarah prayer.

It’s easy to say alhamduilliah when good happens to you, but we should also praise Al-Qadeer when we go through hardship. Next time you are tested, say alhamdulillah from your heart and mean it, and inspire others to do so!  Alhamdulillah ‘alaa kulli haal – all praise belongs to Allah in any case or siltation, no matter what He decrees!

5. Express your need to Al-Qadeer.

By nature we love those who are competent. For example, when you are weak you desire the protection of someone who is strong. Know that Al-Qadeer can make everything happen by His Power, so ask Him. Seek refuge in Him for protection, ask Him to cure your heart, and know that there is no limit to His power.

Only Al-Qadeer is able and fully capable to give you a way out of every difficulty. The Prophet salallahu ‘alayhi wa sallam said, If anyone constantly seeks pardon (from Allah), Allah will appoint for him a way out of every distress and a relief from every anxiety, and will provide sustenance for him from where he expects not. [Abu Dawud]. So increase your istighfaar (seeking forgiveness) by saying astaghfirullah.

O Allah, Al-Qadeer we know that Your power is perfect.  Adorn us with patience and contentment with your decree and help us inspire others to do so. Help us to turn to You and to consult You in big and small matters, and enable us to seek Your forgiveness in abundance. Ameen!