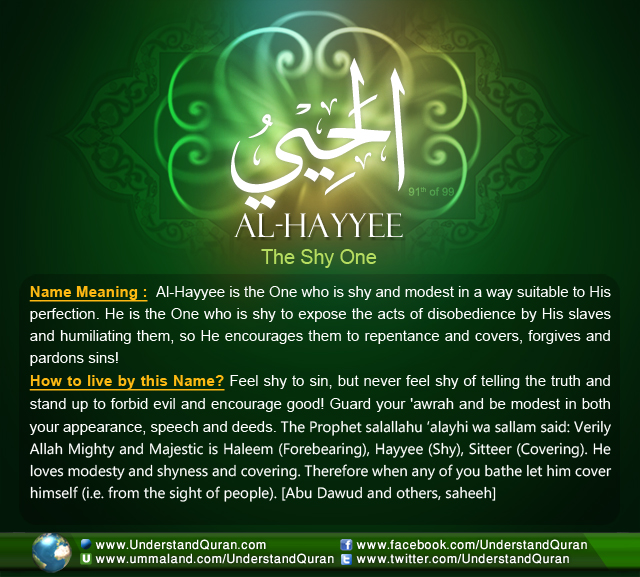 Allah’s name Al-Hayyee— The Shy One— is not mentioned in the Quran but occurs in a narration of the Prophet salallahu ‘alayhi wa sallam. Al-Hayyee is the one who loves and inspires modesty and shyness in His slaves and who possesses the perfect modesty, so much so that He feels shy to leave those who ask Him empty-handed and doesn’t like to expose the misdeeds of His slaves!

The Shy One, the one of perfect modesty

Hayyee comes from the root haa-yaa-yaa, which points to four main meanings. The first meaning is to live. The second main meaning is to greet, and the third is to revive, vitalize and call into being. The fourth main meaning is to be shy or ashamed.
This root appears 184 times in the Quran in 12 derived forms. Examples of these forms are yuhyee (“grants life”), hayyan (“alive”), and istihyaa’in (” shyness”).

Linguistically, haya refers to the attribute of modesty, shyness, humility, and bashfulness. Hayyee refers to the one who owns the perfect modesty and who controls the haya of creation, ashamed Himself to leave us empty-handed and so shy that He dislikes exposing the sins of His slaves.

The Prophet salallahu ‘alayhi wa sallam said: Verily Allah Mighty and Majestic is Haleem (Forebearing), Hayee (Shy), Sitteer (Covering). He loves modesty and shyness and covering. Therefore when any of you bathe let him cover himself (i.e. from the sight of people). [Abu Dawud, An-Nasaa’ee, al-Baihaqi, Ahmed, graded as saheeh]

Modesty: a blessing from Allah

Haya refers to an uneasy feeling combined with embarrassment when someone is scared of being exposed for some unworthy behaviour. Islamically, haya can be of two kinds; the good haya is to be ashamed to commit a deed which Allah ‘azza wa jall forbade or discouraged and bad haya is to feel ashamed to do something that Allah ordered.
Society often portrays shyness and modesty as weakness or lack of confidence; in reality these are among the most beloved characteristics by Allah.  Having a deep sense of haya is a true blessing.

1. Allah ‘azza wa jall loves modesty and shyness. The Prophet salallahu ‘alayhi wa sallam said: Surely Allah (is One who) has haya and is the Protector. He loves haya and people who cover each others’ faults.[Al-Bukhaari].

3. Thirdly; haya brings good to everything in which it’s found. The Prophet said: Haya does not bring anything except good. [Al-Bukhaari]

4. A fourth virtue is that one’s level of haya is an indication of one’s faith, as the Prophet salallahu ‘alayhi wa sallam said: Faith (emaan) consists of more than sixty branches (i.e. parts). And haya is a part of faith. [Al-Bukhaari]

1. Don’t be ashamed to be modest.
The Prophet salallahu ‘alayhi wa sallam said: When lewdness is a part of anything, it becomes defective; and when haya is a part of anything it becomes beautiful. [At-Tirmidhee] Haya beautifies, realizes it’s not something to be ashamed of. Instead you should be concerned if you notice you do not have much sense of modesty and shame in your relationship with others, your way of thinking, your appearance, words, and deeds.

Narrated Abdullah ibn Umar radiyallahu ‘anhu: The Prophet salallahu ‘alayhi wa sallam passed by a man who was admonishing his brother regarding haya and was saying: You are very shy, and I am afraid that might harm you. On that, the Prophet said: Leave him, for haya is (a part) of faith. [Al-Bukhaari]. So haya is not just something for women, it’s an attribute men should have too and it’s crucial to start cultivating a sense of haya in children!

2. Strive for haya with Allah.
The greatest modesty you must have is with Allah ‘azza wa jall, which means you are shy and ashamed to do anything He dislikes and when you do so, you rush to repent. It is He who showers His blessings upon us, but we often use these very blessings to sin, even though modesty is the thing we need most! Know that Allah is Al-Hayy (the Ever-Living) and that every thought and act is witnessed by Him. Let this motivate you to increase in haya! Allah says: Whatever you (O Muhammad) may be doing, and whatever portion you may be reciting from the Quran– and whatever deed you (mankind) may be doing (good or evil), We are Witness thereof, when you are doing it . . . [Quran, 10:61]

3. Don’t be embarrassed to tell the truth.
Sometimes people are embarrassed to stand up for the truth and to forbid an evil or encourage good. You find people shy to defend Islamic concepts, like the hijaab, or even embarrassed to pray in their workplace! Haya means you feel most shyness for Allah ‘azza wa jall and never let shyness of people stand in the way of the orders of Al-Hayyee. Allah is the Shy one but not when it comes to setting forth parables of the truth: Verily, Allah is not ashamed to set forth a parable even of a mosquito or so much more when it is bigger (or less when it is smaller) than it . . . [Quran, 2:26] And: … Indeed, that [behavior] was troubling the Prophet, and he is shy of [dismissing] you. But Allah is not shy of the truth… [Quran, 33:53]

4. Ask Al-Hayyee.
The Messenger of Allah sallAllahu alayhi wa sallam said: Indeed your Lord – tabaaraka wa ta’ala – is The Shy One, The Generous, Allah is Shy from His slave if the slave raises his hands towards Him, that He would return them without anything. [Abu Dawood, At-Tirmidhi, Ibn Maajah – authenticated by al-Albaani] Be amazed and inspired by this beautiful shyness and ask Him for your every need and turn to Him in good and bad times!

5. Revive the concept of gheerah.
We live in times in which many men and women lost their sense of shame and modesty, are obsessed with appearances and attracting attention from non-mahrams and marriage is often seen as old-fashioned. Gheerah is an Islamic concept which means protectiveness or (a good type of) jealousy. The Prophet sallallahu ‘alayhi wa sallam had the most gheerah for his wives and all of the companions were known for their gheerah. The sahaabah were impressed by the strong gheerah of Sa’d ibn ‘Ubaadah radiyallahu ‘anhu, and the Prophet salallahu ‘alayhi wa salalm said: Are you amazed by the gheerah of Sa’d? I have more gheerah than him, and Allah has more gheerah than me. [al-Bukhaari, Muslim] Also: There are three at whom Allaah will not look at (with Mercy) on the day of Resurrection: the one who disobeys his parents, the woman who imitates men, and the duyooth (a man who has no protective jealousy towards his womenfolk). [Saheeh Al-Jaami’ As-Sagheer] Strive to revive your sense of gheerah and remember that honourable gheerah never leads to inappropriate actions according to Islam!

O Allah, Al-Hayyee, we know that You are the One who is shy and who possesses perfect modesty. Adorn us with a strong sense of haya and guide us in being modest towards the creation and in our relationship with You. Aid us to never being embarrassed in standing up for Your Deen and make our sense of shame a way to enter Your Paradise, ameen!

Get the print version of the first book in this beloved series! Order Book 1: 99 Names of Allah – Asma ul Husna here.