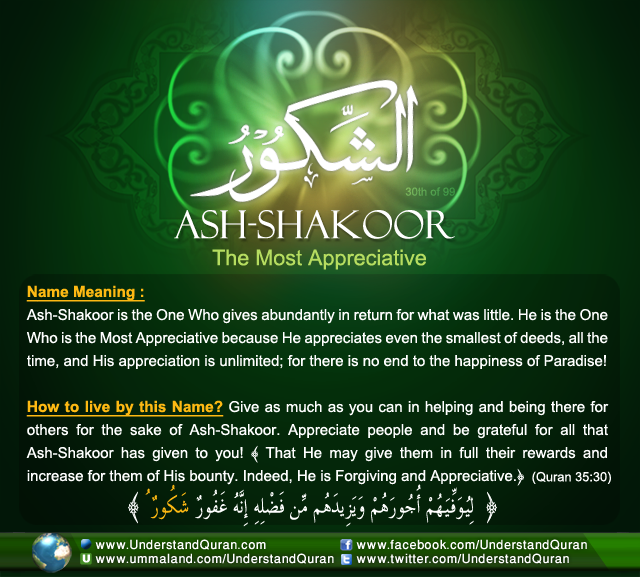 Allah calls Himself Ash-Shakoor— the Most-Appreciative, the Most Grateful, the Rewarder of Good Works — on four occasions in the Quran. He is the One who gives abundantly in response to little. Ash-Shakoor appreciates the smallest deeds with an unlimited appreciation; the ultimate example is the reward of never-ending happiness in His Paradise!

The Perfect Appreciator, the One Who Rewards Little With Much

This root appears 75 times in the Quran in six derived forms. Examples of these forms are shakara (to be thankful), ash-shaakireen (the thankful), and mashkooran (appreciated).

Linguistically, shukr means to increase, appreciate, and recognize good. Shakoor in Arabic is used as well to describe an animal that’s fed with little but gives much back in return. The waw in Ash-Shakoor shows us that Allah ‘azza wa jall is exceedingly appreciative; His appreciation and rewards are beyond what any of us can expect.

Ash-Shakoor Himself says: That He may give them in full their rewards and increase for them of His bounty. Indeed, He is Forgiving and Appreciative. [Quran, 35:30]

Of the four occasions on which Allah’s name Ash-Shakoor is mentioned in the Quran, it’s paired three times with Al-Ghafoor. He is the Oft-and-All Forgiving and the Most Appreciative; even if we commit sins we can return to Him for forgiveness and a reward for the good we do. Ash-Shakoor says: And whoever commits a good deed – We will increase for him good therein. Indeed, Allah is Forgiving and Appreciative. [Quran, 42:23]

The Beautiful Appreciation of Allah

Allah’s name Ash-Shakoor does not mean He has to be thankful for anything, because everything we have comes from Him. It means He is the One who is The most thankful, as He gratefully gives large rewards. Ash-Shakoor even appreciates our intention.

1. Don’t expect anything in return from others.
We often yearn for recognition from others, and when we do good in secret we might wish they find out it was we who helped them. Sometimes you might wish people knew your good intentions even if you fail to do the action. And ever is Allah Appreciative and Knowing. [Quran, 4:147] He knows, rewards, and appreciates what other people might not even know about. Go out of your way to help others, not expecting anything in return, and Ash-Shakoor will send someone to do the same for you.

2. Do good deeds no matter how small.
Never be hesitant in doing a good deed, even if you think it’s tiny compared to all your sins; think about the ability of the One who gives rewards. The Prophet salallahu ‘alayhi wa sallam said: Do not belittle any good deed, even meeting your brother with a cheerful face. [Muslim]. Say subhanAllah a hundred times and Ash-Shakoor grants you a thousand good deeds. Imagine buying an entire village with just one coin; nothing we do can be compared with the infinite reward of Ash-Shakoor.

3. Be patient and sincere, and remember Paradise.
Nothing we do is lost. Sometimes Ash-Shakoor delays the signs of His appreciation to see if you’ll give up. So be sincere and do it for Allah, because you know He’s Ash-Shakoor in this life and in the Hereafter! The Prophet salallahu ‘alayhi wa sallam said: Allah said: ‘I have prepared for My righteous servants what no eye has seen and no ear has heard, nor has it occurred to the human heart . . .’ [Al-Bukharee, At-Tirmidhee, Ibn Majah] Remember Paradise in all you do.

4. Help others and Ash-Shakoor will help you.
The Prophet salallahu ‘alayhi wa sallam said: Whosoever relieves from a believer some grief pertaining to this world, Allah will relieve from him some grief pertaining to the Hereafter . . . Whosoever conceals the faults of a Muslim, Allah will conceal his faults in this world and the Hereafter. Allah will aid a servant (of His) so long as the servant aids his brother. [Muslim] Whether you relieve, help out, or just conceal the fault of another Muslim, Ash-Shakoor will help you.

5. Be grateful and Ash-Shakoor will give you more.
Did you know that recognizing any of Allah’s favours is in itself a favour? Ash-Shakoor bestows His blessings on us even though He doesn’t need us, but sometimes we only thank Him while we’re in great need of Him. What a difference!
Show your shukr for all He has given you and He will give you even more. How can you show your gratitude to Ash-Shakoor? Al-Ghazali said: The best way of manifesting thankfulness for the blessings of Allah Most High is to make use of these blessings in obeying, and not disobeying Him.

6. Do good to all creatures.
Ash-Shakoor notices the deeds that are done to all creatures, not just humans. The Prophet salallahu ‘alayhi wa sallam tells us, narrated by Al-Bukharee and Muslim, about the man who gave a thirsty dog water— fashakara Allahu lahu— and Allah ‘azza wa jall appreciated his action and forgave his sins.

7. Appreciate people.
A beautiful social skill is to always show interest in the lives of others; ask how their job interview went, how their ill relative is doing now, etcetera. Try to pay attention to the details. Compliment others and when they do something good, recognize their efforts and encourage them to keep going.
When thanking people always first say alhamdulillah and then “thank you” to someone, as the reality of thankfulness is to realize that everything comes from Allah! The Prophet salallahu ‘alayhi wa sallam instructed us: The one who does not thank people had not thanked Allah. [Abu Dawud]

O Allah, Ash-Shakoor, we know that You are the most appreciative. Aid us to do good, make us of those who help others for Your sake only, and grant us sincerity and patience in our actions. Adorn us with shukr for all You’ve given us and support us to use all these blessings in obeying You. Let us taste the ultimate reward, gazing at Your countenance and enjoying happiness in Paradise forever, ameen!