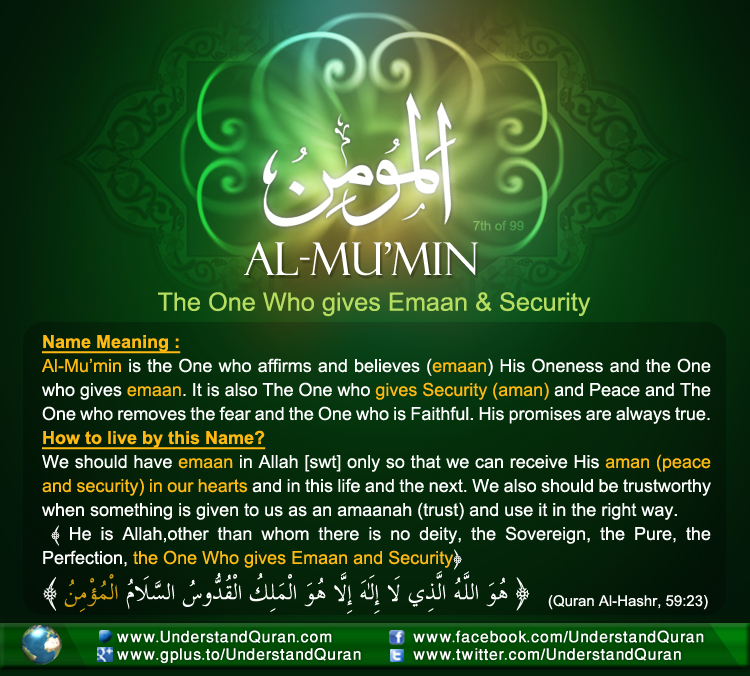 Allah calls Himself Al-Mu’min— The Giver of tranquillity, The Source of faith— on one occasion in the Quran. He is the One who bestows the gifts of peace, security, and faith. Al-Mu’min removes fear, affirms His oneness, and is the Most Faithful!

The Bestower of Faith and Security, the Faithful

This root appears 879 times in the Quran in 17 derived forms. Examples of these forms are amintum (“do you feel secure”), aamanoo (“believed”), al-amaanaati (“the trusts”), ameenun (“trustworthy”), al-imaani (“the faith”), and al-mu’mineena (“the believers”).

Linguistically mu’min points out to three concepts. One is emaan, which is to affirm something, and the opposite of it is to deny something. Al Mu’min is the One who affirms and believes His oneness. Allah Himself bears witness that there is no deity worthy of worship except Him. [Quran, 3:18]
The other concept is that of aman, which means security, safety, and freedom from fear. The word amaanah (translated as “a trust”) comes from the same root. Al-Mu’min is the One who affirms and believes His oneness; He is the One who gives security and removes the opposite— which is fear— and is the best keeper of amaanaat, the One who is most faithful.

Al-Mu’min Himself says: He is Allah , other than whom there is no deity, the Sovereign, the Pure, The Perfection, the Bestower of Faith. [Quran, 59:23]

Who receives the aman of Allah?

The ones who have emaan— belief in Allah ‘azza wa jall— and who act accordingly are the ones who will receive Allah’s aman (security) in this world and the Hereafter. In this world they will experience a sense of serenity and peace of heart during hardship as well as during the terror of the Last Day.
Those who are steadfast (istaqaamah) will have aman in this world, at death, in the grave and on the Day of Judgement. Al-Mu’min says: Indeed, those who say: ‘Our Lord is Allah,’ and then they remain firm (upon that statement), on them the angels will descend (saying): ‘Fear not, nor grieve! But receive the glad tidings of Paradise which you have been promised!’ [Quran, 41:30]

1. Believe in Allah and His messengers.
Have emaan, which is your belief in Allah combined with action in following His commands and staying away from His prohibitions, and you will receive His aman (security) in this world and the next. Whoever brings a good deed will have better than it (ie, a better reward) and they will be, on that day, at peace during the terror. [Quran, 27:89] So read the Quran often, give sadaqah, and focus on your prayers so Al-Mu’min will give you safety on the Day of Judgement.

2. Believe in the promises of Al-Mu’min.
The people of Paradise will say: All praise and thanks is only for Allah, the One who fulfilled His promise to us. [Quran, 39:74] Believe that the promise of Al-Mu’min will always come true. For example His promise is that sadaqah will not decrease wealth, so trust in this fact and fulfil your promises to your best ability.

3. Ask Al-Mu’min for aman in difficult situations.
Al-Mu’min is the only source of aman so ask Him only to grant you safety, as the Prophet salallahu ‘alayhi wa sallam said to Abu Bakr radiyallahu ‘anhu: Be not afraid, surely Allah is with us. [Quran, 9:40] No matter how hard the situation, have emaan and ask Al-Mu’min to give you aman– peace and security— in your heart.

4. Take care of trusts.
The Prophet salallahu ‘alayhi wa sallam said: The believer is one from whose tongue and hand the believers are safe and: The believer is one in whom the people would entrust their blood and wealth. [At-Tirmidhee] An example is to make sure you don’t harm others by your tongue through backbiting.
The Prophet salallahu ‘alayhi wa sallam was called al-ameen, the trustworthy one, strive to be known for your trustworthiness. Return amaanaat (trusts) safely, such as borrowed items or even by keeping secrets entrusted to you. Umar ibn al-Khattab radiyallahu ‘anhu said: If your brother mentions something to you in private, then walks away, it is an amaanah (trust) even if he didn’t instruct you not to inform anyone. [Ibn Muflih’s Adaab Ash-Sharee’ah]
Your body is also an amaanah given to you by Allah ‘azza wa jall, so make an effort to use it in the right way.

5. Be thankful for your safety.
Reflect on the blessing of security and safety. Let them worship the Lord of this House, Who has fed them, [saving them] from hunger and made them safe, [saving them] from fear. [Quran 106:3-4] If Al-Mu’min gave you a safe place to live and work, show your thankfulness; many are not in this position and teach children to recognize this favour upon them.

6. Ask Al-Mu’min.
Ask Al-Mu’min to bless you with emaan until your last breath and to adorn you with the characteristics of the mu’minoon (believers) as mentioned in the Quran and Sunnah and in turn study these features so you can work on adopting them. When you are scared turn to Al-Mu’min for safety. When your emaan is low ask Him to strengthen it. The Prophet salallahu ‘alayhi wa sallam taught this supplication (part of the full supplication mentioned in the morning and evening remembrance: Allahumma-stur ‘awraatee wa aamin raw’aatee. O Allah, veil my weaknesses and set at ease my dismay (grant me aman. [Ibn Maajah, Abu Dawud]

O Allah, Al-Mu’min, we know that You are the Source of Faith and Giver of safety. Bless us with strong emaan, lead us in taking care of our trusts and fulfilling our promises, and adorn us with all the characteristics of Your beloved believers. Grant us steadfastness and safety in this world and the Hereafter, and make us of those who enjoy the ultimate safety of Paradise, ameen!